Medal "Veteran of the Armed Forces of Russia"

Back in the days of the Russian Empire, there were many awards, orders, insignia, medals. At the time of the historical heir to the empire: the Soviet Union, a tribute to military traditions has maintained its constancy.

Many orders passed from the tsarist era to the register of the Red Army. After the collapse of the great Soviet Union, global changes took place almost everywhere. Heraldry of the country was no exception. Part of it ceased to exist at all, some insignia passed as a legacy to the Russian Federation and successfully exist today. Medals, orders are of a different nature depending on the merits, all varieties here will not be possible to take into account.

We will devote attention to the medal "Veteran of the Armed Forces of Russia."

History, description of the award

The article talks about the most interesting and fascinating element for the ranks of the armed forces for the collectors of the country's history - the medal “Veteran of the Armed Forces of the Russian Federation”.

Her story of creation begins with the order of the commander in chief of the USSR, published back in 1976. Honored veterans up to the period of the collapse of the USSR as a state were noted with such an award.

The appearance of the insignia of those times is as follows: 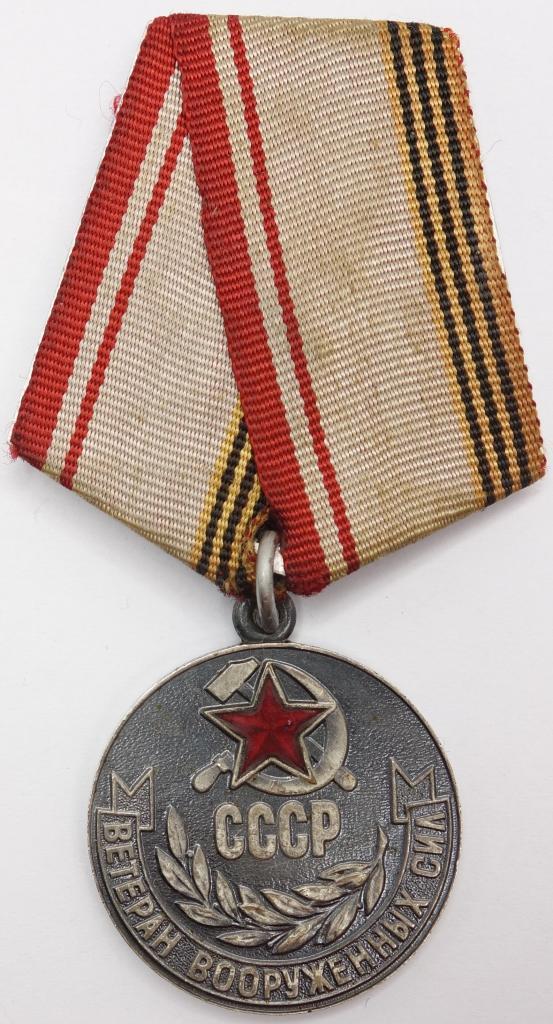 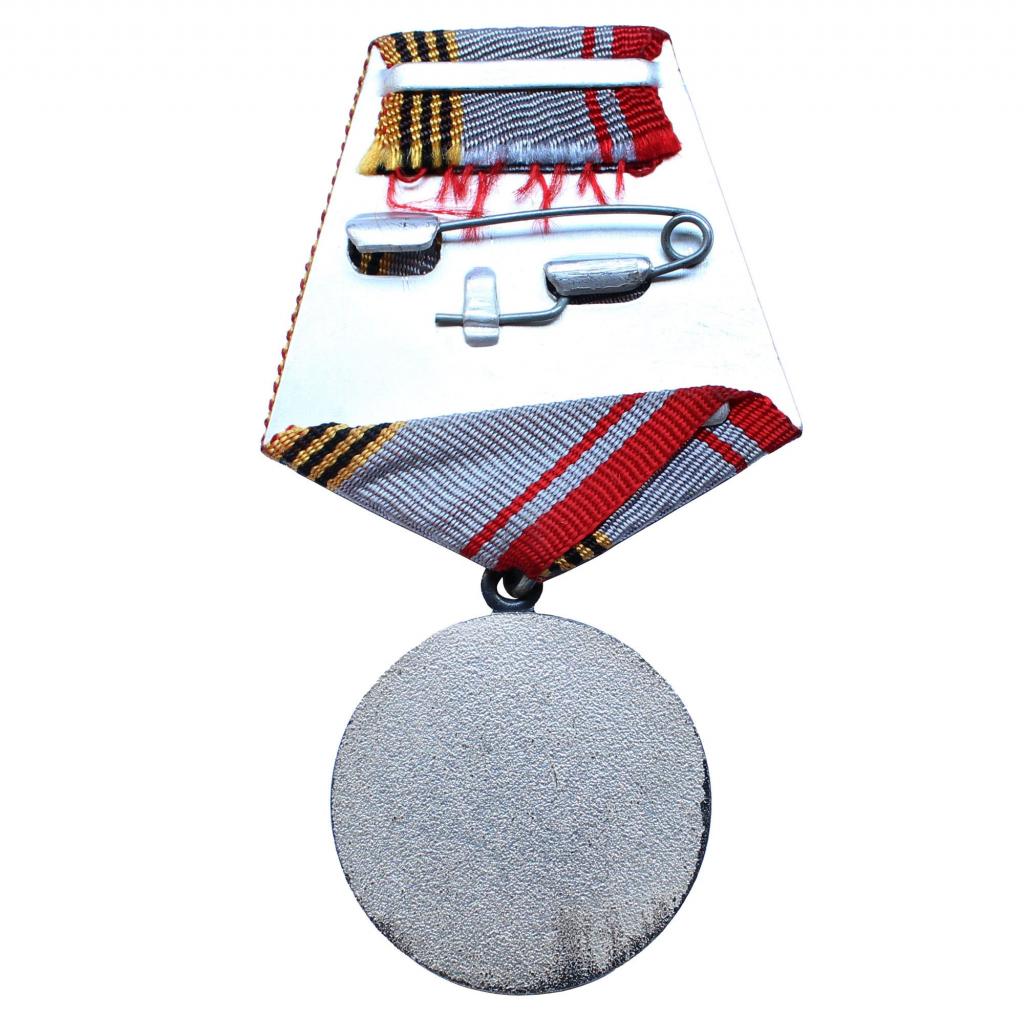 The collapse of the USSR introduced significant adjustments to the military heraldic system, as, indeed, to all structures of state and people's power.

This award item was abolished and was not awarded to anyone until 2017.

All the years following the collapse of the USSR, the sign of valor was unfairly absent from the ranks of the armed forces, until by order of the Minister of Defense of the Russian Federation No. 770 in 2017 it was again restored and recognized as valid among the award ranks. He began to be destined for delivery to all military pensioners who had served in the Armed Forces for at least twenty-five years.

Its appearance, taking into account the collapse of one state, the rise of a new, other political, military mess, was significantly changed.

To date, the award image began to look like this: 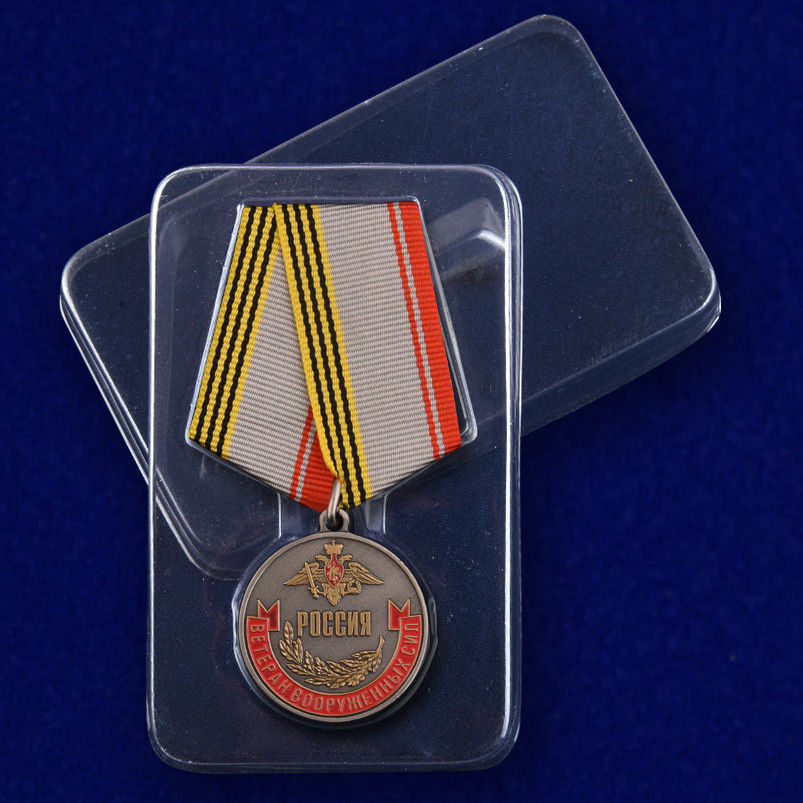 How to get the “Veteran of the Armed Forces” medal to Russian veterans now?

Previously, the USSR Ministry of Defense, archives of the armed forces, and other departments strictly observed all the statistics of military personnel, officers, young or retired, clearly recorded, took into account the terms of service, the merits of each military, but after the collapse of the Union of Socialist Republics, chaos took hold of all these services. 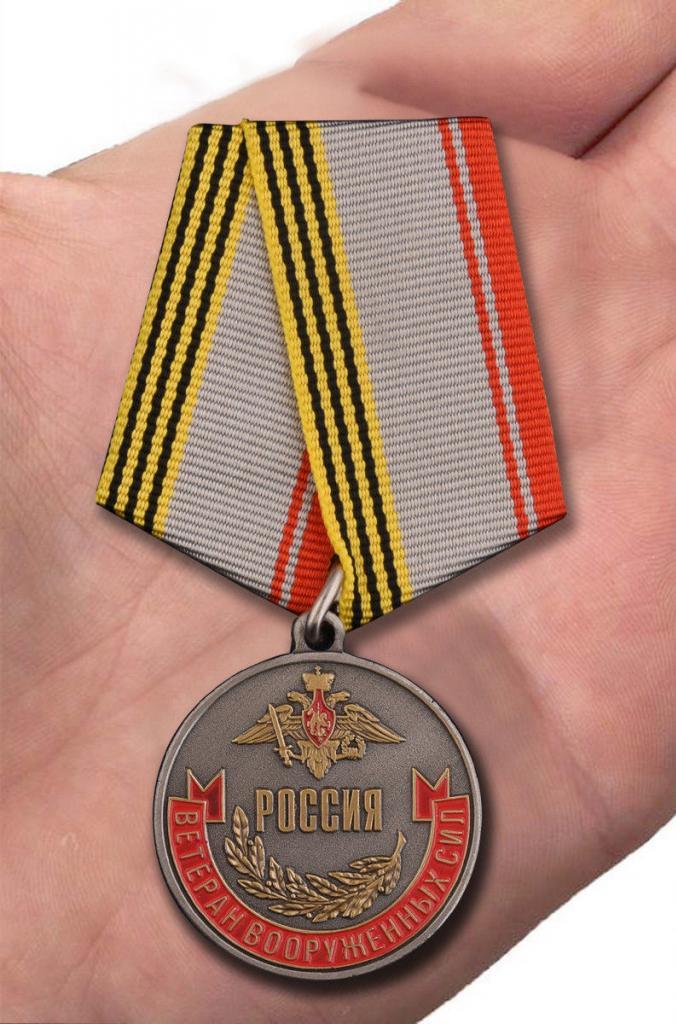 The reasonable question of how to get the medal “Veteran of the Armed Forces of the Russian Federation” is solved by simple, clear regulatory methods:

1. By the forces of the executive bodies of federal power at the place of service.

This type is more suitable for current military pensioners (who have completed their military service after 2017). Those. for those servicemen who retired after the restoration of this award badge:

2. By independent forces through local authorities (military enlistment offices at the place of residence). The main points for self-medal "Veteran of the Armed Forces":

The type of receiving the distinguishing mark by points, even more thorny, but able to help those military veterans who, by the will of fate, resigned as a citizen during the cancellation of this honorary award:

What to do next to the heroes who have given their debt, and now military pensioners, in fact, but not yet by state recognition, if they have gone one way or another to receive a well-deserved veteran award? The bureaucratic mechanism provides a clear answer to this question:

So, what does the Veteran of the Armed Forces medal give? In addition to awarding the fact that a person served 25 years in the army, nothing.

Special benefits are not awarded to carriers of the Veteran of the Armed Forces medal, but there are some differences from civilian pensioners: 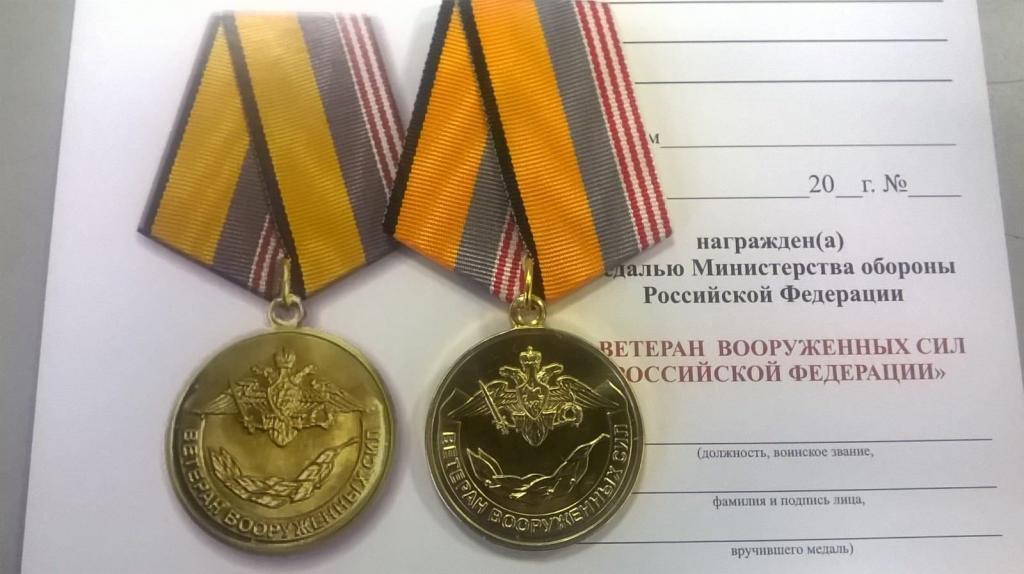 Modern appearance and composition of the medal

Insignia with a cloth block in the colors of St. George’s ribbon, round, standard diameter 32 mm. The award element of a veteran of the RF Armed Forces, like any other, consists of three main parts:

Description of obverse and reverse

The alloys represented in the composition are: nickel, zinc, silver. Round shape with convex edging. In the center is the proud emblem of the Armed Forces of the Russian Federation in the form of an eagle with outstretched wings about two heads.

Paws of an eagle hold a sword and a laurel wreath. The chest is decorated with a shield on which is located George the Victorious on a horse, killing a serpent with a spear. The emblem of the double-headed eagle is convex in shape, golden in a single color.

Below the eagle, the front part of the medal is crowned with a large inscription of the award: “RUSSIA”, and below “VETERAN OF THE ARMED FORCES”. The inscription is also made in a convex format of a single-color character. 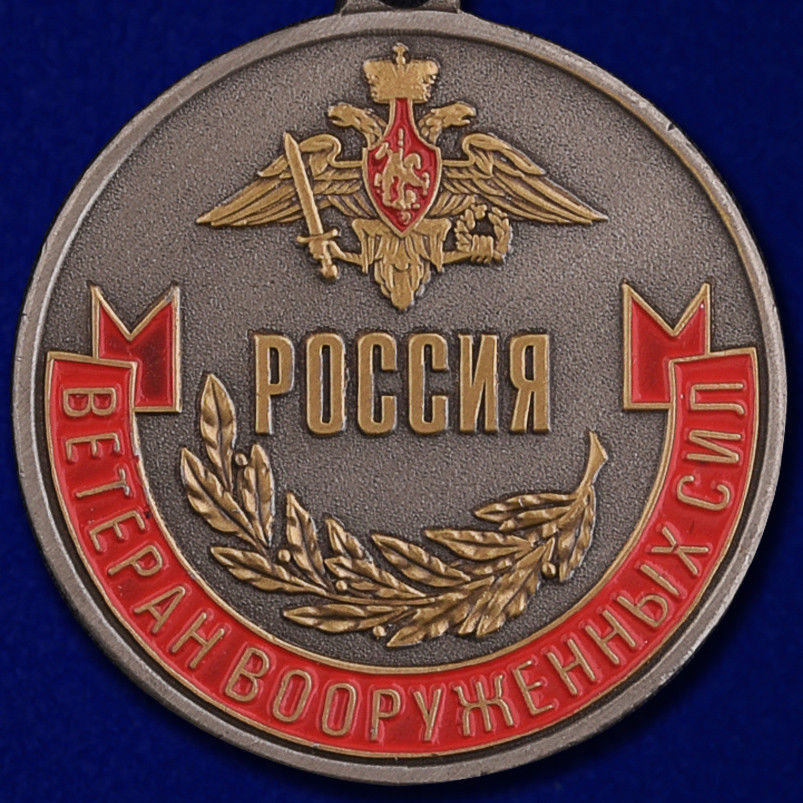 The back of the award is reverse. The reverse side has a golden solid color, a convex canvas along its edge and has the following composition of the picture: 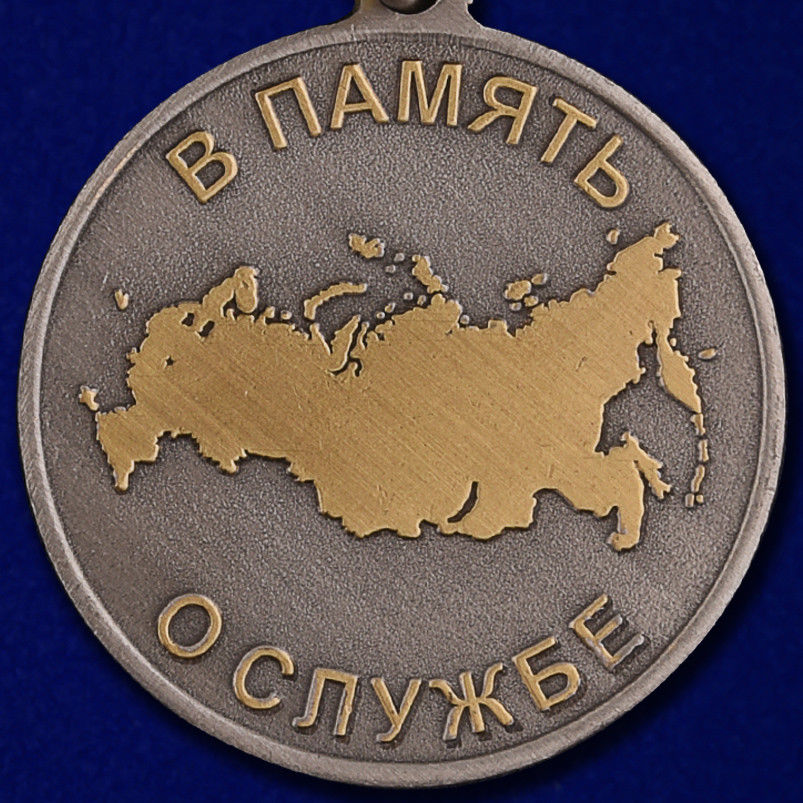 In the center of its unit, the entire width of up to half the circle on it is a map of Russia in the current state borders. The turnover is decorated with three crowned inscriptions located at the top, center (under the map of Russia) and the bottom of the round shape of the turnover.

On the upper part are the words "In memory", below - "About the service."

The round part of the element with the help of a ring and an eyelet is connected to the cloth part of the award, its block of silk, made in yellow-black colors: shades of the great St. George ribbon, a symbol of all the armed forces of the country. 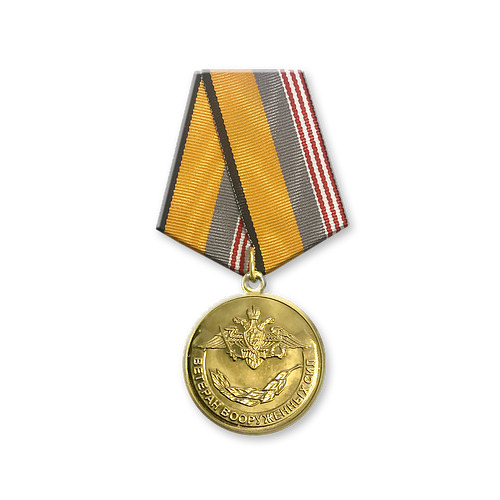 On the front side it is decorated with the indicated stripes, and on the back it has special fasteners: a pin, with the help of which the veteran badge is mounted on a military uniform or lapel of a civilian coat.

Rules for Wearing a Military Award:

The wearing of the subject of distinction is mandatory for the location on the left side of the chest, along with the other insignia of this type.

Requirements for wearing a medal for a coat type:

Such a distinction in civil society is worn on the left lapel of a civilian suit. 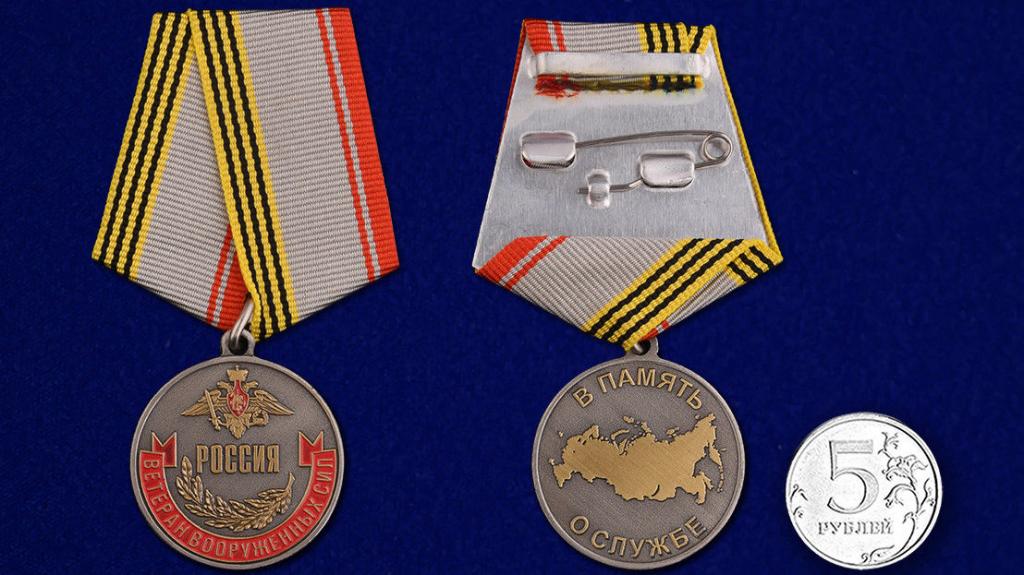 It is very pleasing that after such a long pause, this distinctive sign was restored. For collectors, the award element is of great interest, both as a variant of the times of the USSR and in its modern form.