In the history of German football, there have been and will be many talented, prominent, productive players. One of those is Michael Ballack, a midfielder on the FIFA-100 list. Six years ago, he ended his career, becoming a real legend. And it’s about him that we’ll talk now.

Michael Ballack was born in 1976, on September 26, in the small town of Görlitz, located on the border with Poland. After some time, his family moved to Karl-Marx-Stadt. It was there that the boy’s sporting path began.

From an early age it was clear that Michael was just made for football. He was tough, tall and strong. Therefore, at the age of 7 years, the boy entered the football academy at FC “Karl-Marx-Stadt”, where he played for the next 12 years, until 1995. True, in 1988 the club was renamed Chemnitzer.

And in 1995, the future German midfielder Michael Ballack made his debut at the highest level. And even if the club participated only in the second Bundesliga, this was a significant event. 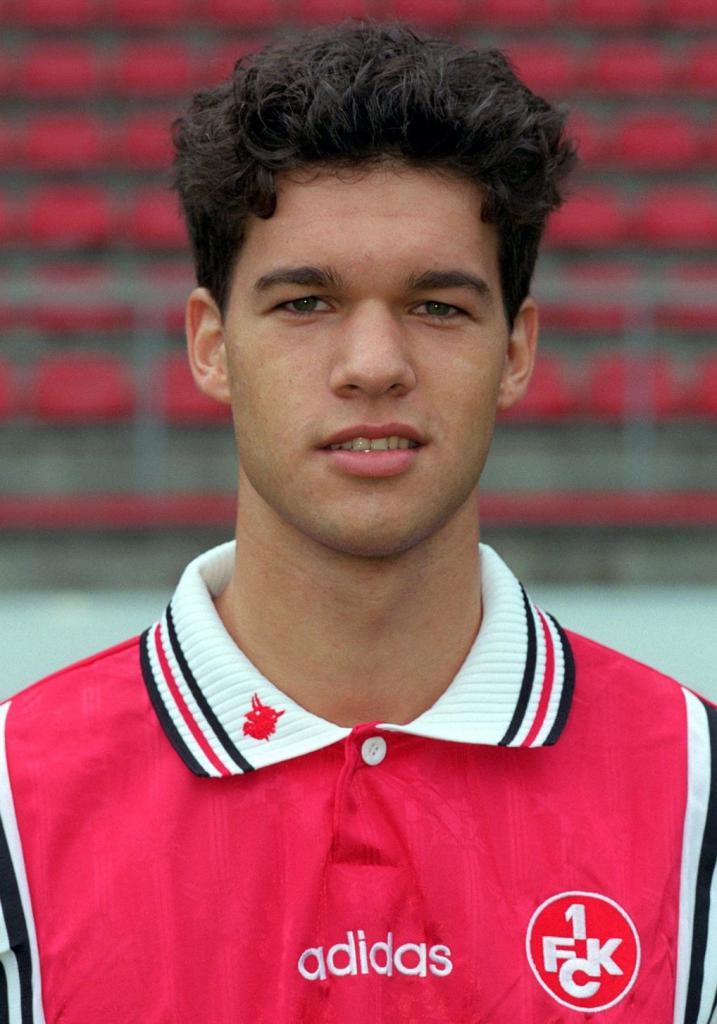 The young football player showed himself perfectly. For the first season, he spent 15 matches. But, despite this, the club flew into the regional league. Michael continued to play. Moreover, in the 1996/97 season, he became its leader. In 34 matches, the young man scored 10 goals.

Such performance did not go unnoticed. The young midfielder received a call to the youth team. He was also invited to the Kaiserslautern, barely returning to the Bundesliga. It would be a completely different level for Michael and an invaluable experience, so he agreed.

As it usually happens, the first season was contradictory for the football player. He managed to enter the field in just 16 games. And though Michael Ballack did not score goals, he received excellent marks for the game.

In the first season he became the champion of Germany. It was amazing. For the first time in the history of German football, the club, which only made it to the first Bundesliga from the second, lowest, won the national championship. 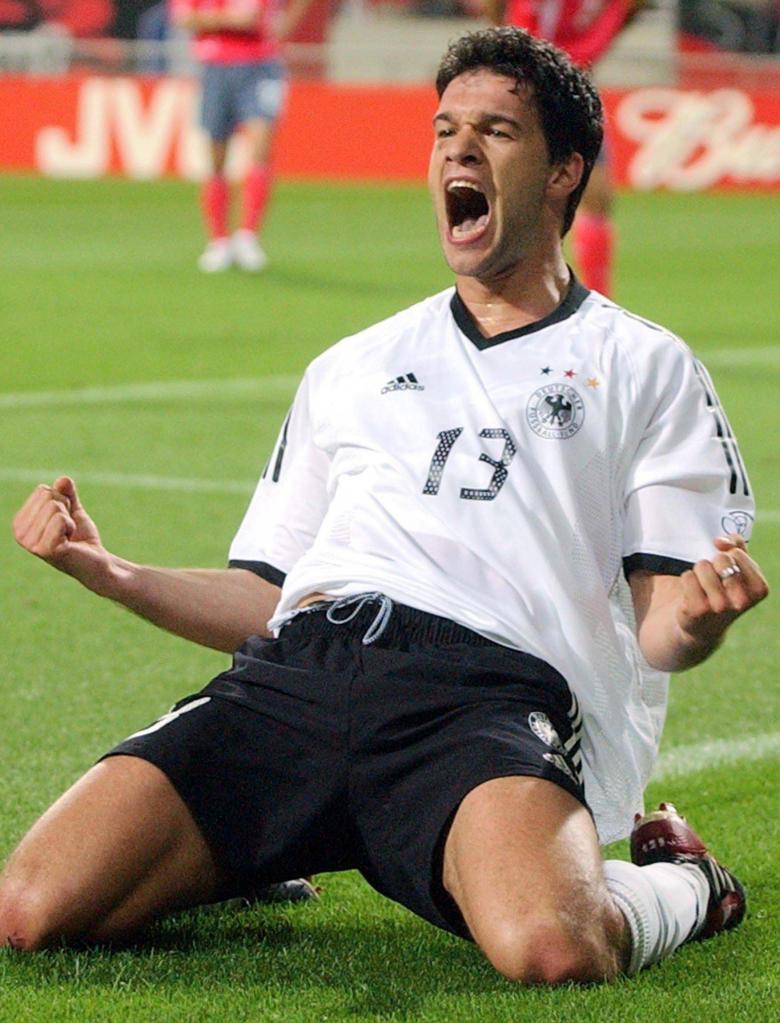 But not everything was so good. Michael quarreled with Otto Rehagel - he did not like that he plays a little. Although the coach always emphasized in his interviews that Ballack is a talented player.

Otto heard him, and in the next championship Michael hardly sat on the bench. He played 30 matches and sent 4 goals into the opponents' goal. He also made his debut in the Champions League. Moreover, Kaiserslautern reached the ¼ finals, and largely thanks to Michael.

Continuing to examine the biography of Michael Ballack, it must be said that his relationship with the coach at Kaiserslautern remained tense. All sports media predicted his departure to another club. And so it happened. In 1999, Leverkusen Bayer bought the player, albeit with great difficulty.

But the season still turned out to be a turning point. In a good plan. Michael was no longer spoken of as a talented and promising young footballer. They began to write about him as a real master, an experienced player. Ballack himself admits - in many ways this is the merit of Daum.

Unfortunately, due to an injury Michael missed many games at the very beginning of the championship. His absence led to Bayer 04 not leaving the group in the Champions League. But when he recovered, he showed just a sparkling game. 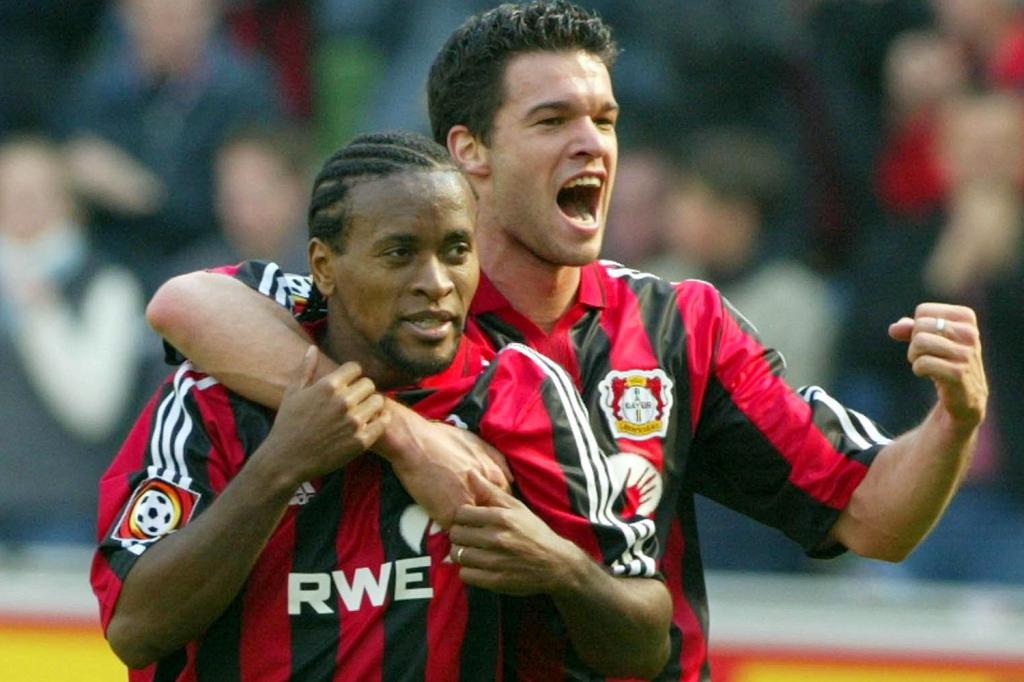 But the denouement was tragic. Bayer 04 was a draw in the match against the modestly playing Unterhaching, but the club lost. Ballack's own goal was to blame. Michael, even years later, regretfully recalled that day, calling it the worst of his career. After this mistake, the opponents broke out and rolled Bayer 04 another goal. Leverkusenzi lost the championship title.

In that year, October 20, one of the most high-profile scandals in all 100-plus years of the history of German football erupted. 24 hours before the Bayer 04 game against Dortmund Borussia, it turned out that Christoph Daum was taking cocaine. Team coach associated with a pharmaceutical corporation.

It was a world scandal. Moreover, the German national team at that time prematurely signed a contract with Daum. He was supposed to be her head coach! Of course, this affected the team. Bayer 04 did not rise above 4th place. And again did not leave the group in the Champions League.

Continuing to talk about the career, biography and personal life of Michael Ballack, you need to tell about the event, which many football fans seemed inevitable. It's about the player’s transition to Munich Bavaria. 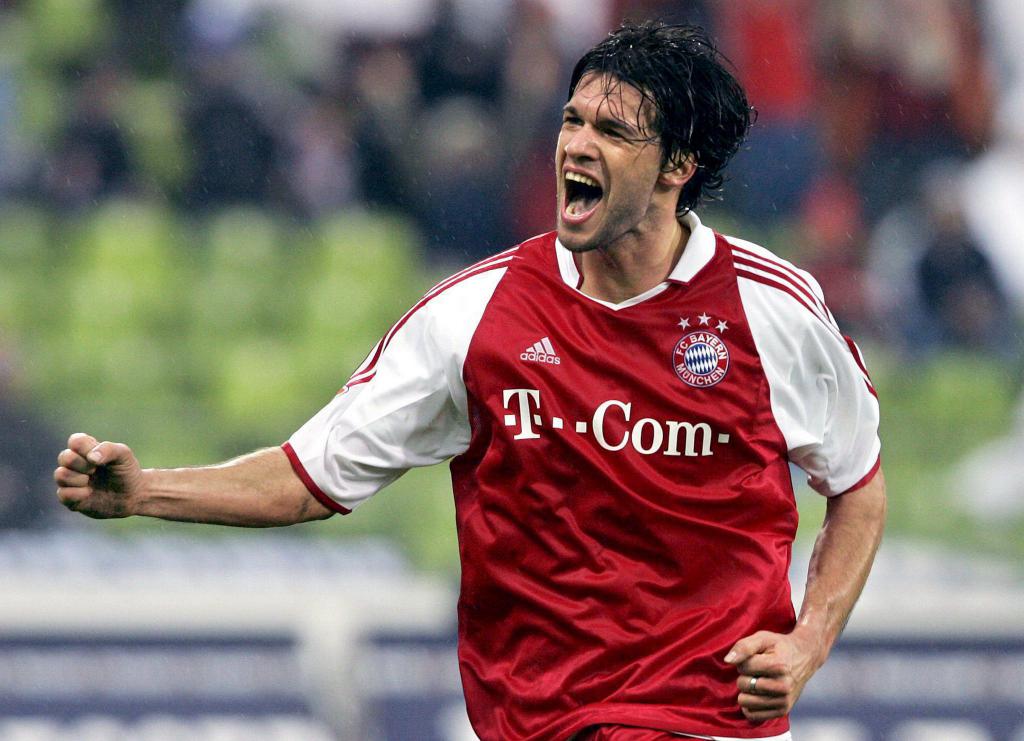 It happened in 2002. The first season was controversial. The team won in the Cup of the country and in the Bundesliga, but loudly flew out of the Champions League, although Ballack proved to be excellent. No wonder he was recognized at the end of the season as the country's best footballer.

In Bavaria, he practiced a lot in defense. Michael in one interview shared with reporters that with the 4-4-2 scheme, he can’t attack normally. He was fined for this.

Until 2006, he played in Bavaria. Michael Ballack's statistics are impressive: he scored 44 goals in 107 games.

This was the next club where Ballack moved. For four years, he played for the London team, playing the role of a midfielder. He spent 105 matches and scored 26 goals.

Michael Ballack could extend the contract, but there were disagreements. He thought about playing at Chelsea for another two years, but he was offered only one contract. In addition, the football player’s salary did not suit. Therefore, it became clear that he would not stay for the next season.

Although he played at Chelsea Ballack effectively, but less brightly. If in “Bavaria” he was closer to the attack, then in the London club he was identified in the depth of field - to be responsible for the transition from defense to attack. 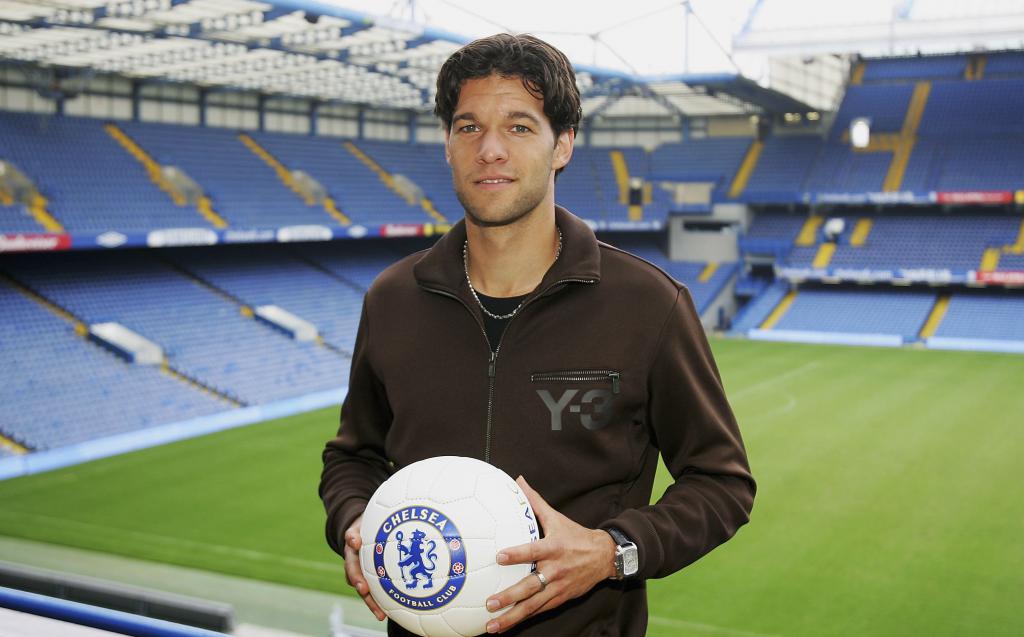 The last two years of his career, Michael spent in the club where he gained his fame. Ballack joined Bayer 04 as a free agent on June 25, 2010. But on September 11, barely playing out, he was injured again. But this time he injured not the ankle, but the tibial hand of the left leg.

In the national team

From a young age, footballer Michael Ballack was regularly called up to the national team. At first he played in the youth team, then he moved to the main team.

Michael received high marks for his game, but the European Championship, held in Holland and Belgium, was unsuccessful. Not only for him, but for the whole team. The team at that time was torn by squabbles, the players were in conflict. Bottom line: neither a clear basic composition, nor a set game.

Of course, before the World Cup, scheduled for 2002, the team was not among the favorites. However, coach Rudi Feller created a pleasant and friendly atmosphere in the team. And the world saw true Germans - determined to win, disciplined, ready to fight to the end. 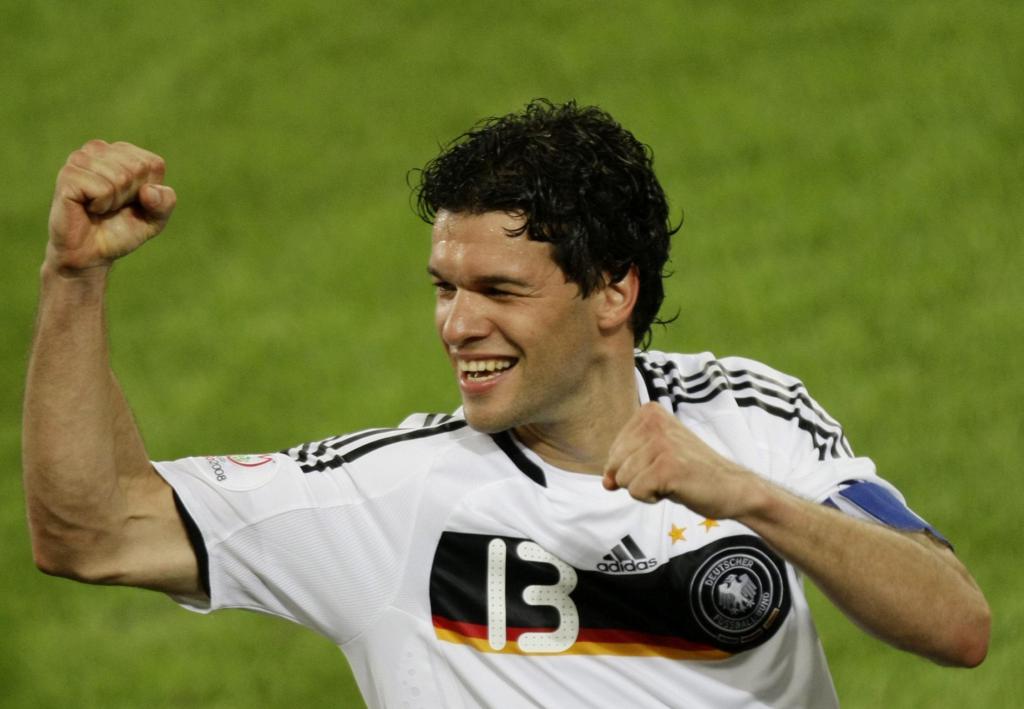 They snatched the victory from Ukraine in the butt opposition (1: 1 and 4: 1), and it was Ballack who was the leader leading the team to victory. He and Miroslav Klose showed themselves best in that championship. True, Michael, having thwarted the Korean attack in the semifinals, received a yellow card, and therefore did not play in the final. But in the return attack, he scored a winning goal for them.

Having played six games at the 2002 World Cup, Michael scored 3 goals and completed 4 assists. It was his goals against Korea and the USA that were victorious.

It is not surprising that in mid-July he became the best player in Germany, and UEFA recognized him as the most productive midfielder of 2002.

The 2006 World Cup was not as successful for the national team as the previous championship. In the semifinals, they lost to the Italians, who later became the winners. And Ballack for that championship scored only one goal, and then in the penalty shootout in the game against Argentina. But Germany still managed to take third place. They beat the Portuguese 3-1.

Unfortunately, in 2010, on May 15, Ballack received a serious ankle injury. Doctors stunned the football player - the treatment will last 8 weeks. So, he will not go to the last World Cup in South Africa for him in his career. Instead, Philip Lam became the captain at that World Cup. 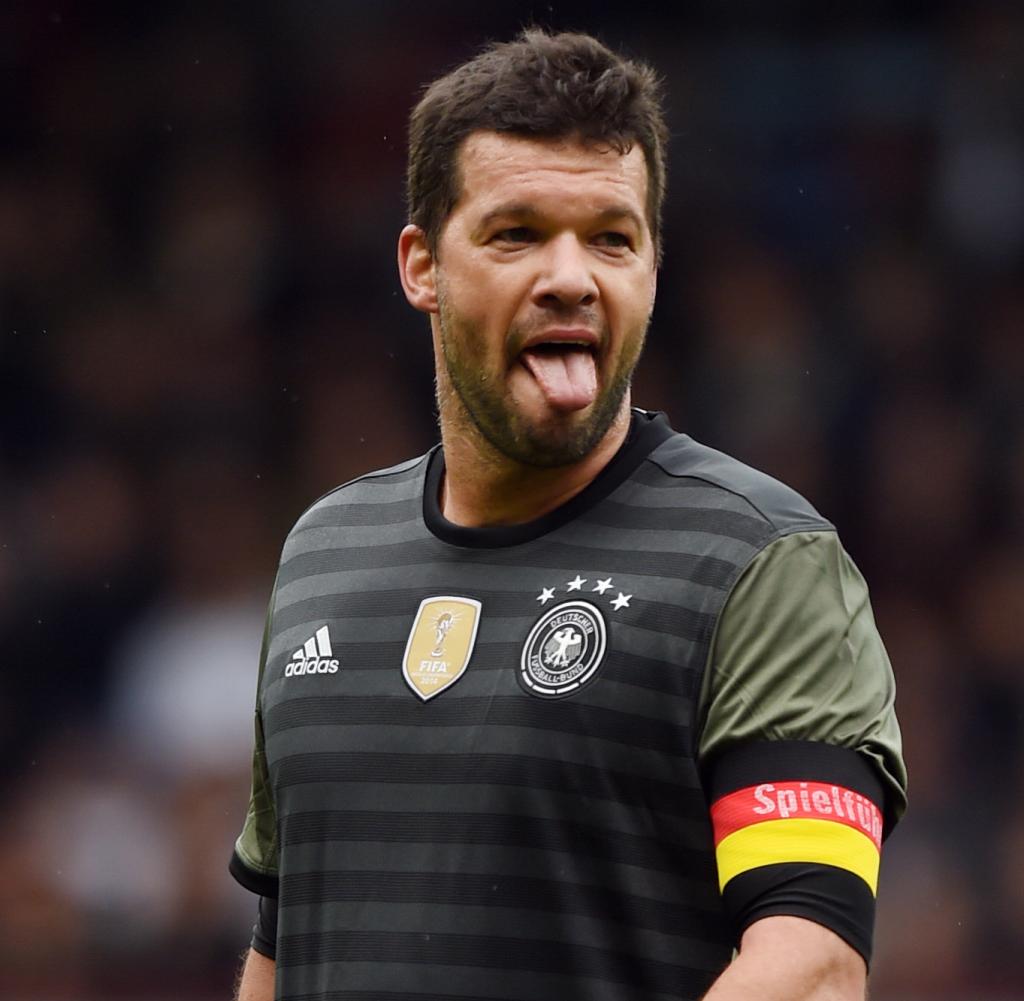 Even during the time of the game at Kaiserslautern, Michael did not have a permanent position. Ballack was a playmaker, a support midfielder, often even went to the flanks. Since then, he became known as a versatile player with excellent physical fitness.

Otto Rehagel in those days used him as a joker. Michael simply “covered” the problematic positions in the middle of the field.

Ballack coped excellently with both attacks and defenses, playing at any position in the center of the field. The footballer hit equally well with both his right and left foot. That is why many famous clubs were interested in it. Everyone wanted a talented player to join their ranks.