Theater corner in kindergarten: purpose, design ideas with photos, equipment with toys and accessories, and a children's repertoire for performances

Scripts, sets, costumes ... All this can be attributed not only to the performances that adults attend to diversify their leisure time. For example, in a kindergarten, a theater corner enables children to plunge into the world of their favorite fairy tales, to visit the roles of good and evil characters, and learn to make the right choice.

The life of our children is not limited to activities in kindergarten. During their free activity, it is necessary to create all conditions for the development of imagination, speech and creativity.

It is important that the subject-developing environment performs such functions as activation of speech, verbal communication and children's creativity. These factors must be considered when organizing a developing space for children in a kindergarten group. 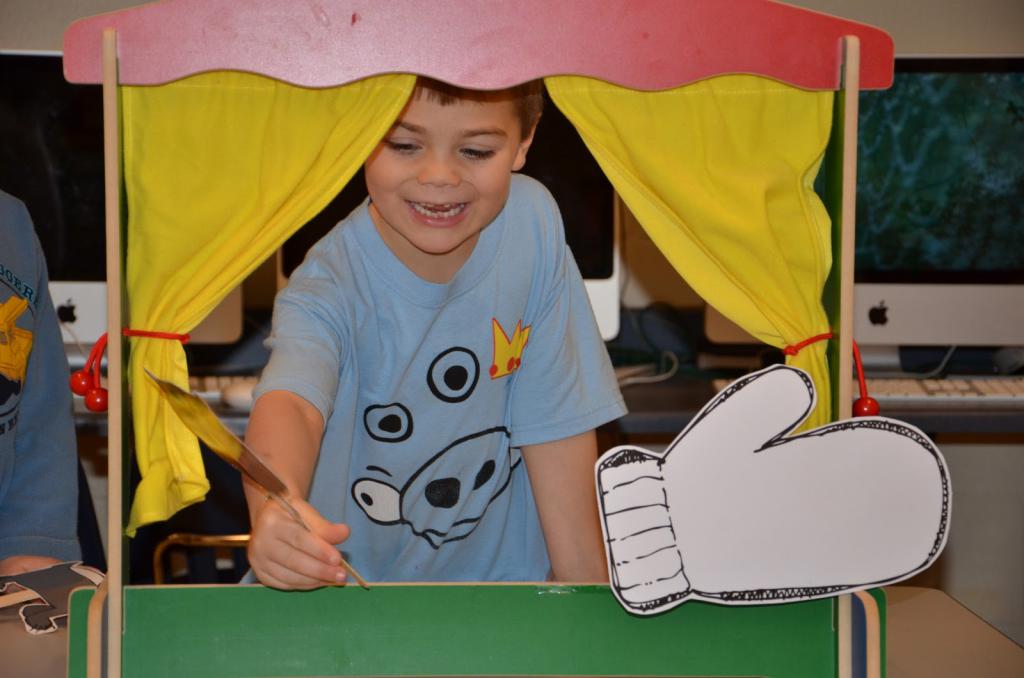 For the proper organization of children's activities, zoning of space in a group room is provided. That is why there you can meet various thematic corners such as "Kitchen", "Hospital", "School", etc.

Some kindergarten teachers take the theater corner into a separate structure. However, more often we see large art centers where various subsystems are combined. They can combine a circle of drawing, music, manual labor and theater. This saves space. And most importantly, the basic principles of the theater corner are respected.

Since the theater corner in the kindergarten group is an essential element of the artistic and aesthetic development of children, it must comply with the following principles: 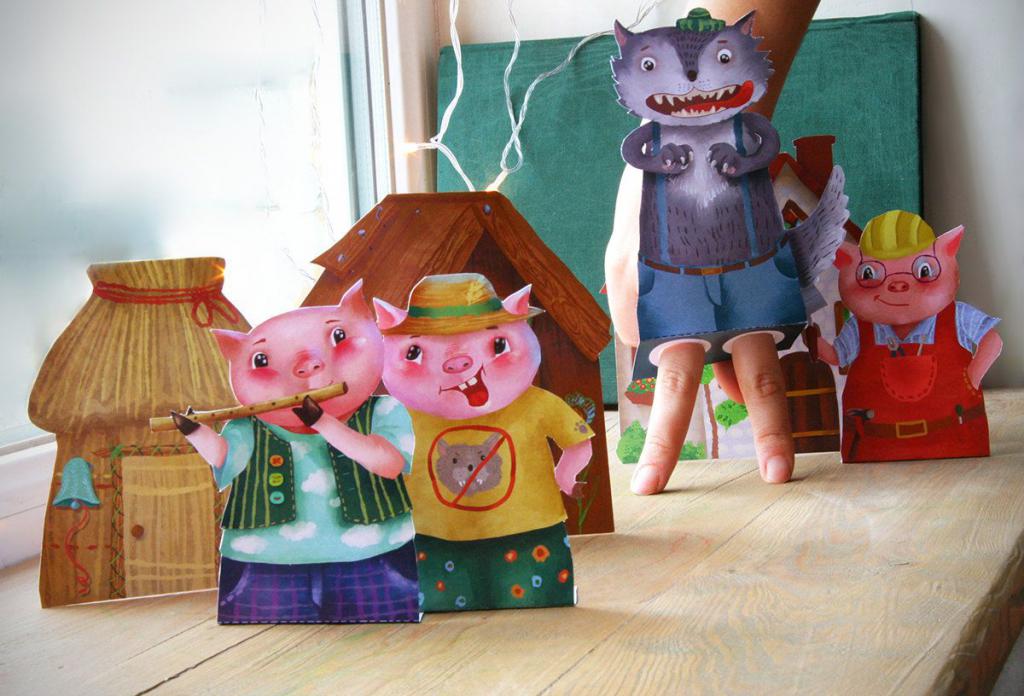 Arrangement of the art center

Furniture for a theater corner in a kindergarten can be made independently from improvised means, or can be made to order. The main components of the theater are a screen and a mummers corner. The rest of the attributes has its differences depending on the age of the children.

For example, for children of preschool age, they use the details to stage fairy tales known to children ("Teremok", "Turnip", "Ryaba Kurochka", etc.), namely: a flanelegraph for displaying pictures and a mini-screen for a table theater. You can use unpretentious elements of dressmaking such as a scarf, umbrella, beads or hats.

All kinds of masks are used to equip a corner in the middle group. It can be animals, and fairy-tale characters, and even images of vegetables. Of the paraphernalia, a large screen is used for staging performances and a showcase for costumes.

Children of the older group of kindergarten can use the decorations made by themselves in the productions. This reinforces children's interest in preparing the performance. It is recommended to have props for staging 4-5 diverse tales. Thanks to this, children will have a choice. They can also, based on these materials and scenery, come up with their own fairy tales and productions, thus developing creative thinking. 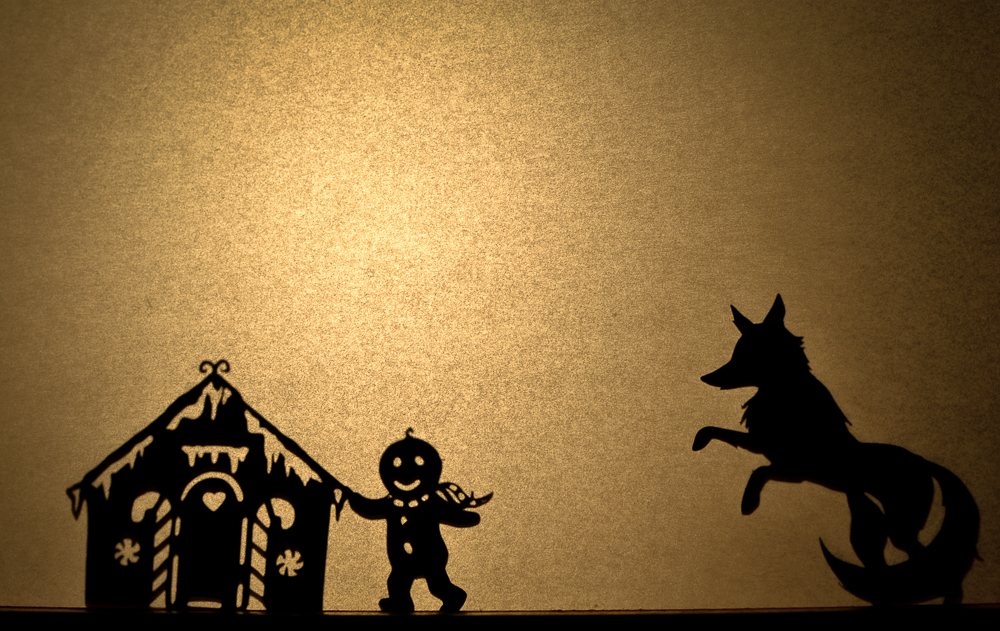 The theater corner in kindergarten involves not only learning the script and staging the performance. There are many types of performances in which children will develop not only imagination and creative thinking, but also fine motor skills, associations and even tactile sensitivity.

In a kindergarten, a theater corner, as a rule, consists of several blocks. When forming them, the age factor must be taken into account. An art center may include the following types of theater:

It is recommended to alternate different types of creative activity so as not to cause satiety in children. 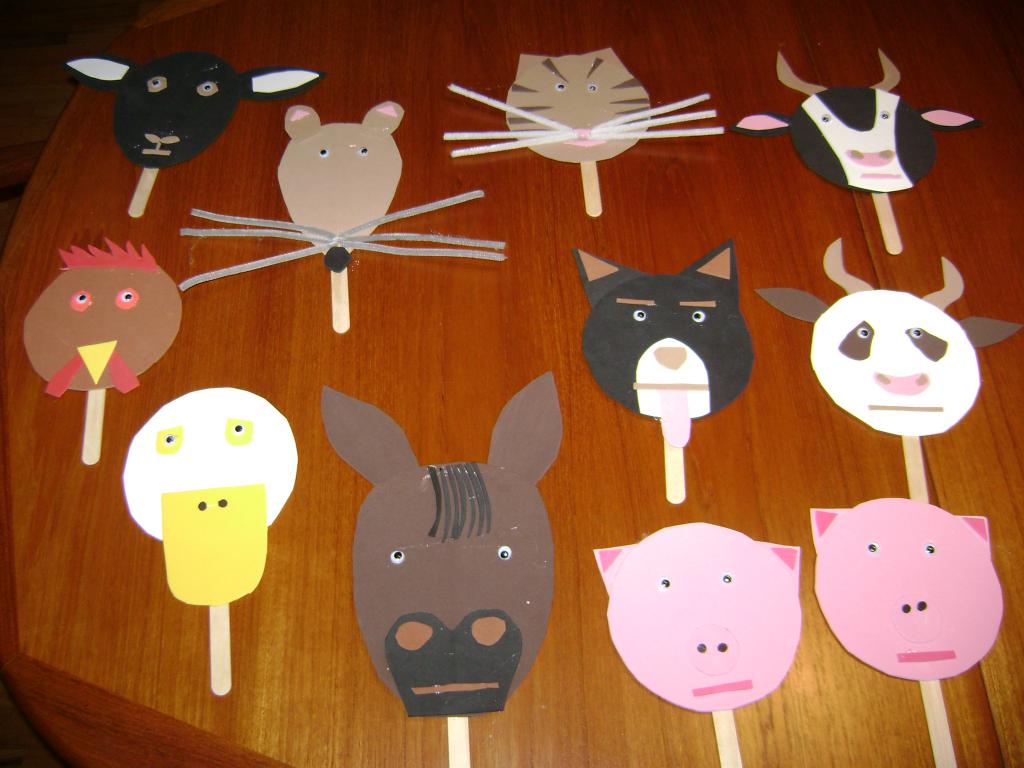 Any improvised means are suitable for creating a theater corner in a kindergarten with your own hands. Most commonly used:

Any item can be adapted for decoration. However, the main thing is to observe safety measures. The paraphernalia that the child will constantly use in his theatrical activities should be safe. 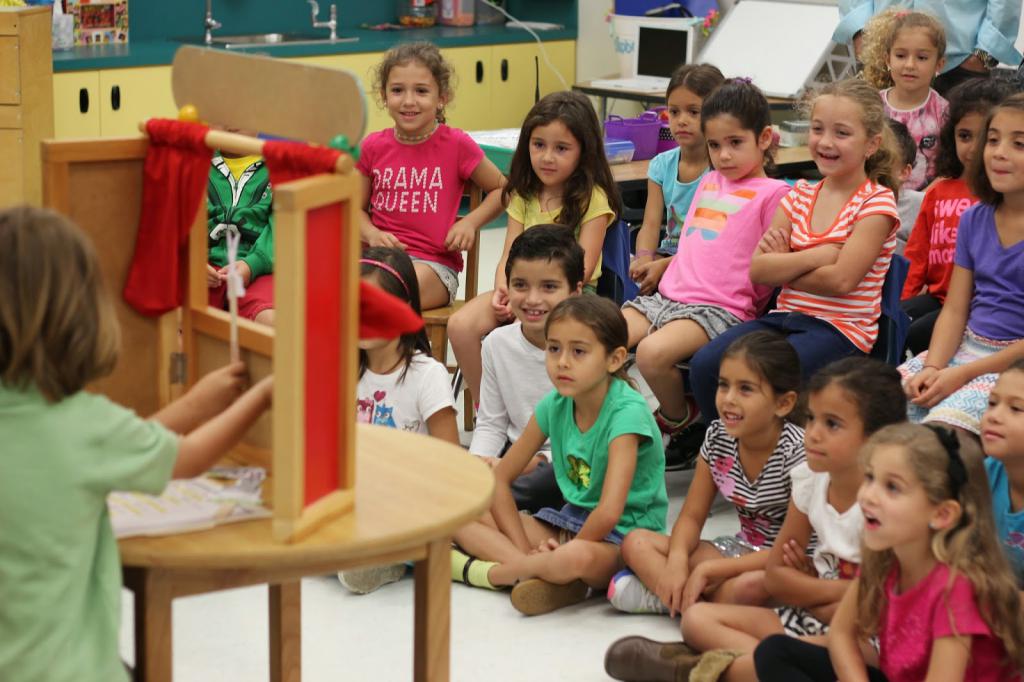 The key role in the design of the theater corner in kindergarten is played by the so-called bouncer doll. This is a kind of mascot and keeper of the theater. Any character from a fairy tale can act as this item. It can even be fictional, the main thing is that it always be in a prominent place. It is desirable that this attribute of the theater is always in the theater corner and occupies a central position. Even better if he will take part in productions or act as a spectator.

How to arrange a theater corner in kindergarten? This question is asked by all novice educators. Initially, it is necessary to make a screen, both large and small, for a table theater. You can use any lightweight fabric for this. It is enough to hang it on a stick or baguette and fix it on a tripod. You can also use a wooden frame.

Window screens are very popular. They are universal, they can be used for both large and table theater. To make them, you need to take a sheet of thick cardboard and cut a window in it. In the hole you need to hang the curtain, and the screen is ready.

An example of the design of a theater corner in a kindergarten in the photo below shows that, having great imagination, you can create a colorful and interesting “Melpomene Temple”. 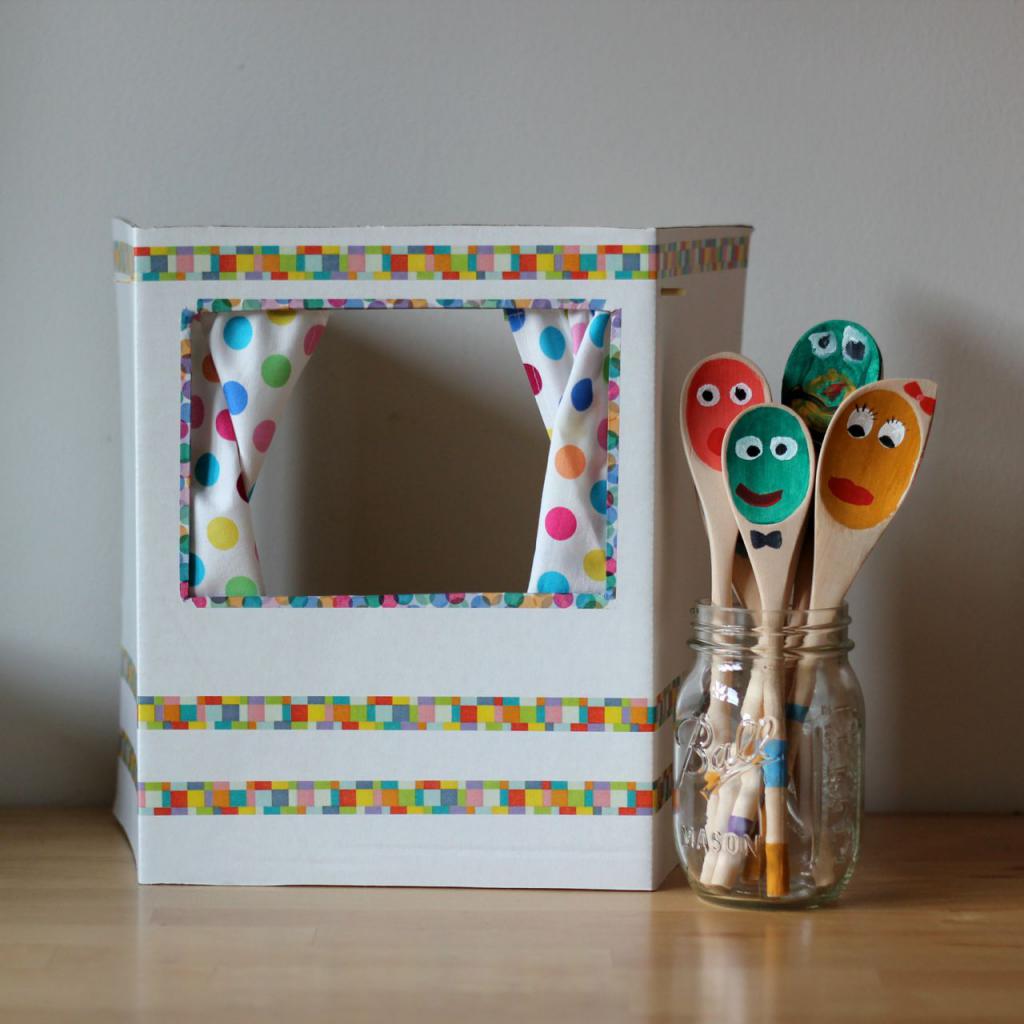 Quite often you can find combined corners. Art performances have musical accompaniment. For this, various tools and technical devices are provided in the theater corner.

As factory and home-made tools use wooden spoons, rattles, maracas, whistles and more. The theater and music corner in the kindergarten can also contain noise jars (containers for cinder surprise with various fillers), hammers from corks, pancakes from saw cuts, metal phones, tambourines, bells, accordions, guitars, etc. All these devices can be used to create your own soundtrack or play existing songs. It develops a sense of rhythm in children and instills a love of music.

In the older groups of the kindergarten, tape recorders are used to listen to music, record sound and noise effects, and watch a video library of literary works. Children in preparatory groups play scenes for ready-made sounds, for example, for audio tales. 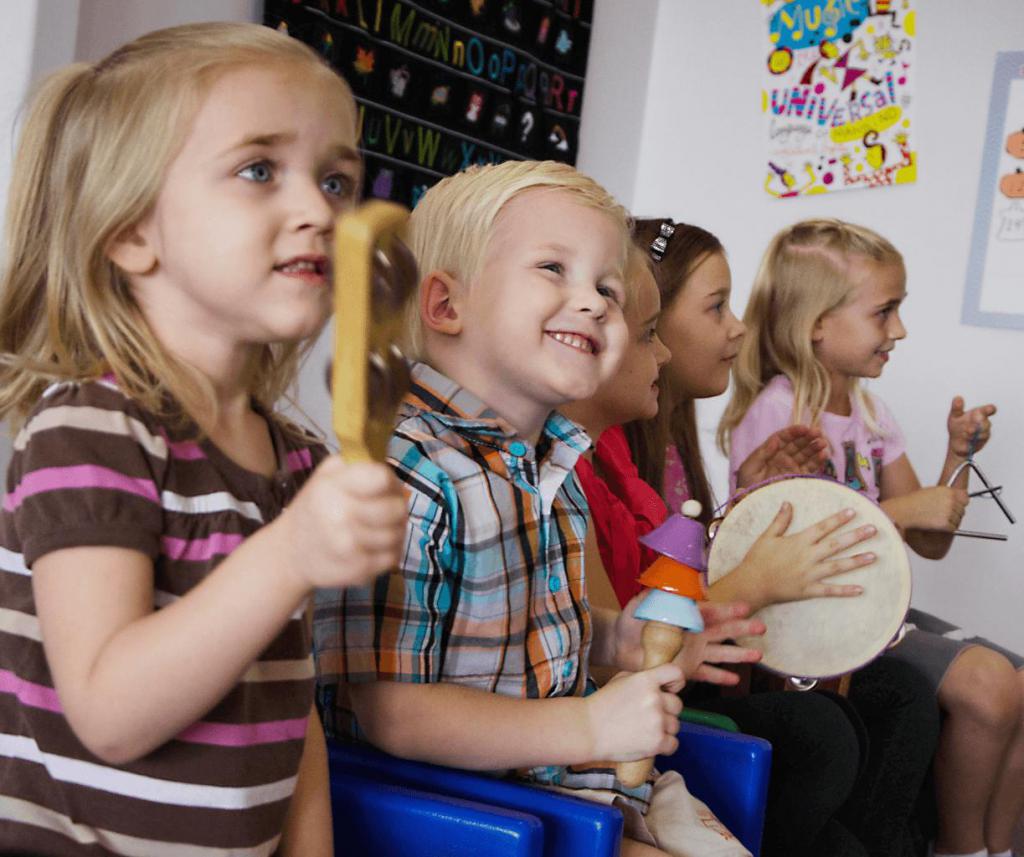 The activities of the creative corner should have a clear focus. Therefore, you can’t just let the production of children take their course. It is necessary to constantly monitor the process of theatrical activity.

To this end, they look at puppet shows and conduct conversations on them, arrange dramatization games, and literary courses “Guess the name”, “Guess the name of the hero”, “Remember and Tell”. They play fairy tales and stage productions based on poems. It is also necessary to perform exercises to form expressiveness of performance.

The repertoire of the children's theater troupe

When the venue for the performances is ready, all that remains is to split the roles and start rehearsing. However, here you can stumble on some difficulties. Every child wants to get a certain role, and often they get such a set of characters that it’s impossible to find a finished script or fairy tale. In such a situation, you can compromise. For example, to invite children to write a script on their own, or to prepare it with a team of teachers.

On the other hand, you can teach children to follow the rules. To do this, you need to give children a ready-made presentation scenario and offer to distribute existing roles. It is important only to prevent conflicts among the children's team. If, for example, one of the children wants to play Pinocchio, but this role is occupied, then the next time you should definitely give this child the right of first choice.

As for ready-made scenarios, it is necessary to observe the age principle here. The repertoire of children's performances for toddlers will not be identical to the performances for children of the preparatory group.

For young children, the following performances are recommended:

For children of middle, senior and preparatory groups, the repertoire is complemented by more complex tales. They have more characters and a more complex plot. Children can put simple fairy tales on their own, and in the case of complex productions, the help of a teacher may be needed at any stage of preparation for the performance.