How to solder chips? Soldering iron for radio components: which one to choose?

Inexperienced hams sometimes have the problem of replacing chips on a printed circuit board. Producing a seemingly simple process of dismantling radio components, often detachment of the contact pads or damage to a serviceable element due to overheating of its body. This problem occurs due to the need to heat a large number of legs at the same time or to remove solder from the contacts in turn, which leads to their breakdown.

Therefore, for high-quality dismantling, you need to study well the question of how to solder the microcircuit, and also which one to choose a soldering iron for removing radio components from the printed circuit board.

The main methods of dismantling chips

Before you start to solder the microcircuit, you need to determine what type of housing parts used in a particular case. Despite the wide variety of radio components, there are two main types of mounting chips on a printed circuit board:

There are several methods using various soldering tools that can effectively simplify the process of dismantling microcircuits:

The choice of dismantling method largely depends on the knowledge of the technical characteristics of the microcircuit (heating temperature, housing type), as well as on the practical skills of the amateur radio operator.

Soldering the chip using a conventional soldering iron is considered a daunting task. Such work can be done by an experienced amateur radio operator, without damaging the contacts of the printed circuit board and a working part.

The essence of the method is to alternately remove the molten solder from the legs of the chip. At the same time, it is important that the soldering iron tip is wetted with liquid rosin (flux) each time, and after that the solder residues are removed by wiping them with a damp rag. 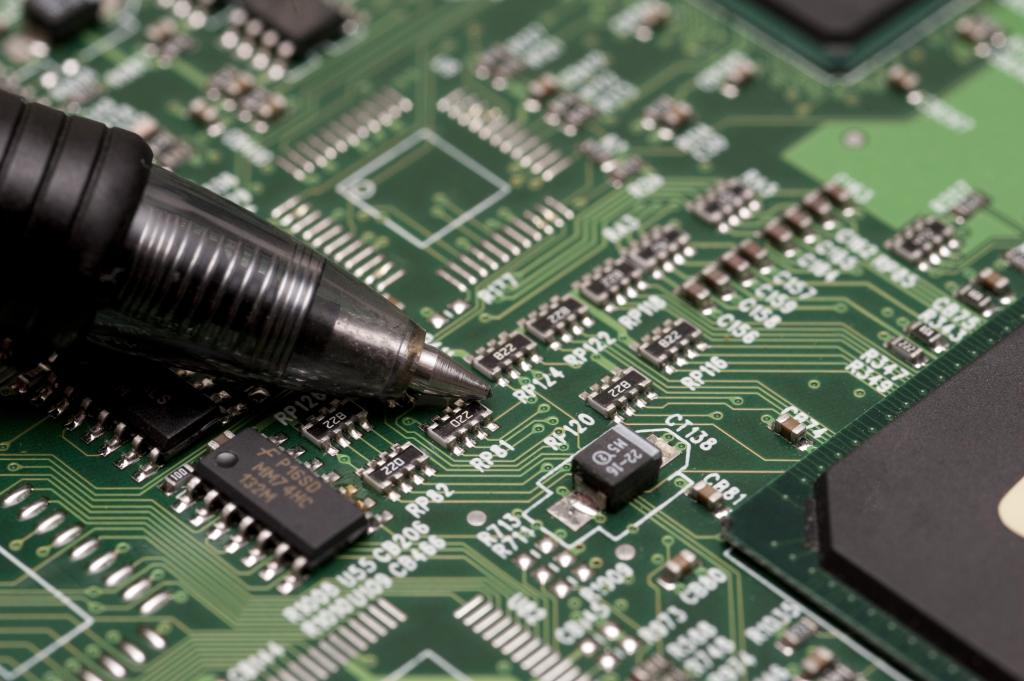 The completion of the dismantling of the chip is performed after removing the solder. To do this, the part is hooked on the side of the board and separated, after a little warming up of the contact pads. The force should be small so as not to damage the contact tracks.

Before you solder the microcircuit in this way, you need to perform several preparatory operations. To do this, carefully remove the shielding braid from a small piece of coaxial cable.

Braid is a good heat sink element, which reduces the possibility of overheating of the soldering place. In the distribution network you can buy a ready-made braid impregnated with rosin. But due to the considerable cost and high consumption of material, for one-time work it is preferable to make it yourself. 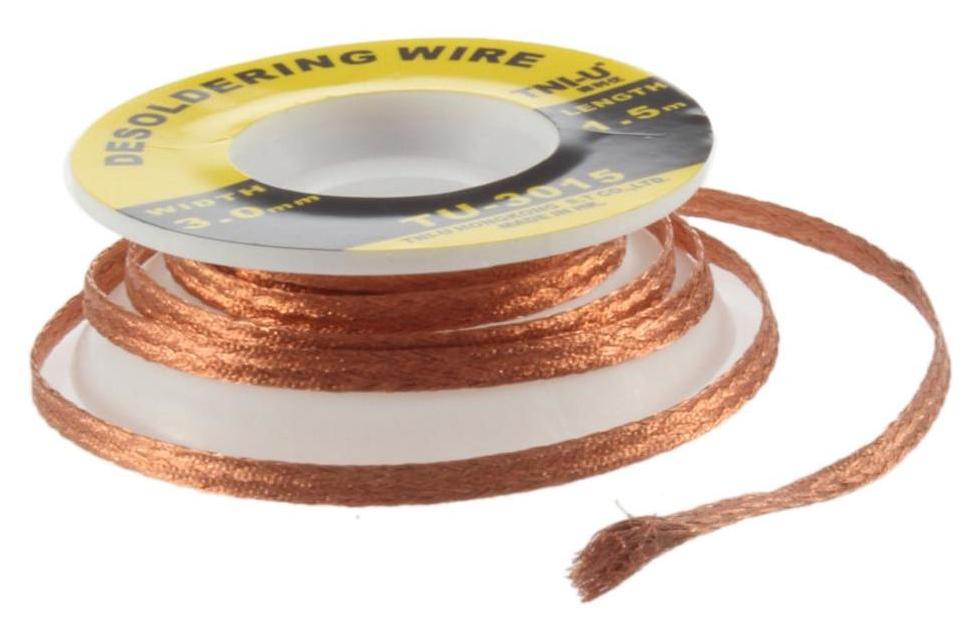 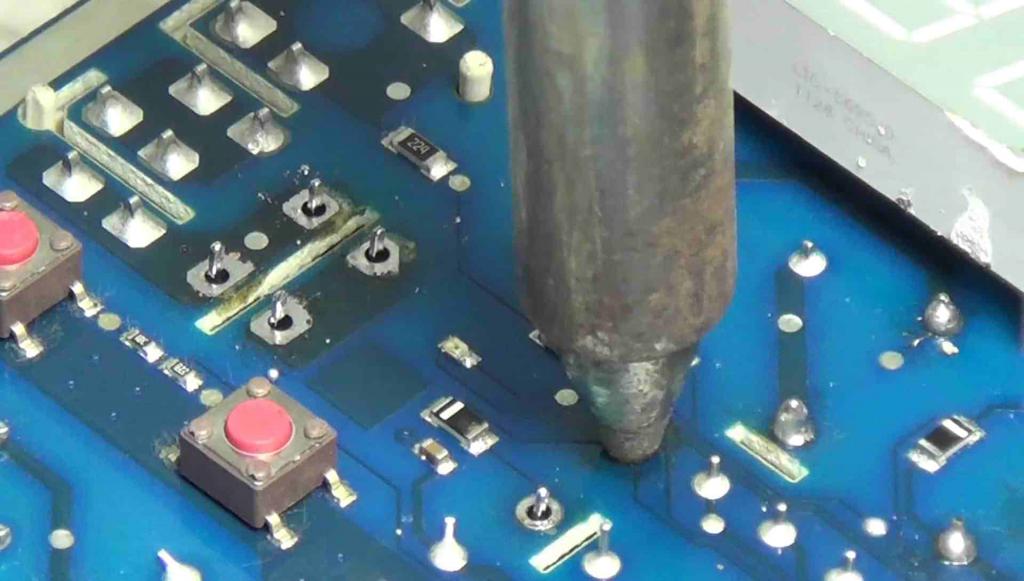 Before soldering the chips, the suction must be brought into working position. To do this, press the piston and fix it with a locking device.

The dismantling technology is as follows: 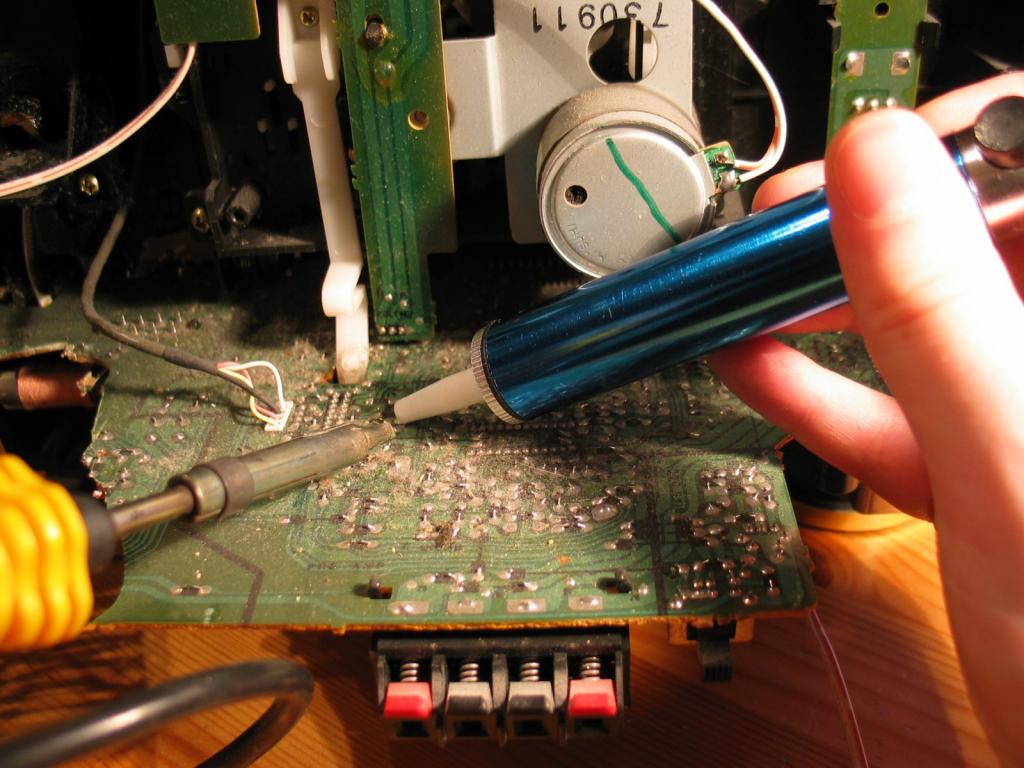 When performing a large amount of work, the suction must be periodically cleaned.

To perform one-time work, suction can be done independently. For this, it is necessary to remove the piston from a simple medical syringe and insert the spring, for return movement. On the spout of the device you need to put on a metal tube of suitable diameter. The device is ready.

Dismantling a chip using a needle

Often radio amateurs use a needle from a medical syringe to solder microcircuits. The diameter of the needle is selected so that it is inserted into the hole on the board, and the leg of the part passes into it. Having picked up such a needle, you need to file the oblique cut of the tip with a needle file to a right angle.

Putting the needle on the leg of the chip, it is necessary to heat the contact point on the board with a soldering iron. Then, while the solder is in the molten state, we rotate the needle with gentle movements and put it into the hole. As a result of such actions, the leg of the part is isolated from the board. Next, the same operation is performed with the remaining legs of the chip.

Also, special factory equipment can be used to clean contacts. 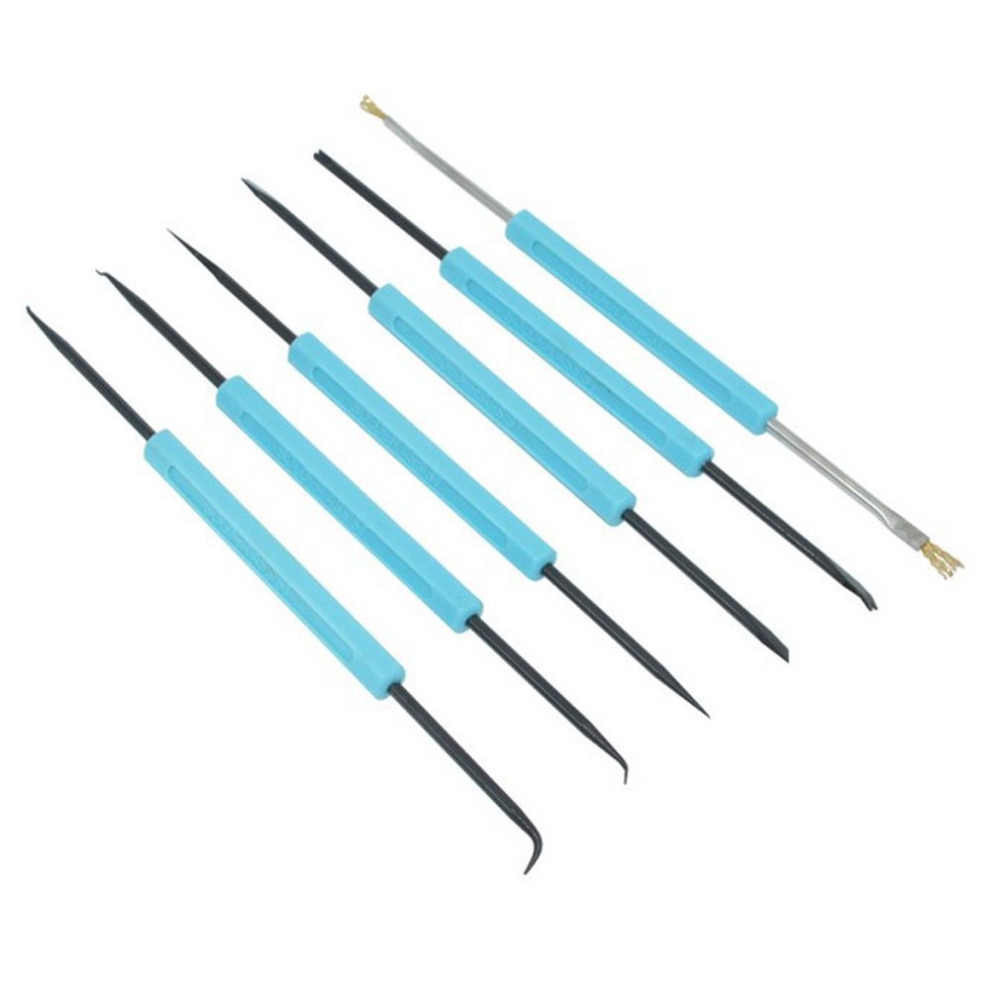 The presence of several legs in the microcircuit complicates the process of simultaneously evaporating them from the board. Therefore, radio amateurs often use special metal heat-conducting nozzles to heat several contacts at once.

The process of such dismantling looks simple. A special plate or a simple razor blade is applied simultaneously to several contacts. Then the blade is heated to the melting point of the solder. Since the heating area is increased, it is necessary to use a soldering iron of 40 watts of power.

While heating the heat-conducting plate, it is recommended to sway the chip a little to simplify the process of releasing the legs from the solder. After removing one row of contacts, the plate is transferred to another row of legs and a similar operation is performed until the part is completely released from the board.

The use of special alloys for dismantling

A distinctive feature of the Rose or Wood alloys is their low melting point. So, the Rose alloy has a melting point almost two times lower than tin, about 100 ℃. This property of the material allows it to be effectively used in the process of soldering small radio components and microcircuits.

The technology of soldering consists in applying the alloy granules to the contacts, after which this zone is heated by a soldering iron. Thanks to the alloy, the solder evenly melts at low temperature. All that remains is to gently pry the part with tweezers.

Wood's alloy (65-72 ℃) has an even lower melting point, but it contains toxic cadmium, which significantly limits its use at home.

It is worth noting that a beginner radio amateur, before proceeding with the dismantling of microcircuits, needs to figure out which one to choose a soldering iron for radio components. This will allow you to complete the task much better and more efficiently.

The soldering iron must be lightweight for continuous operation, since a heavy device quickly loads the radio amateur's brush, which makes its movements inaccurate.

Structurally, a soldering iron consists of the following elements: 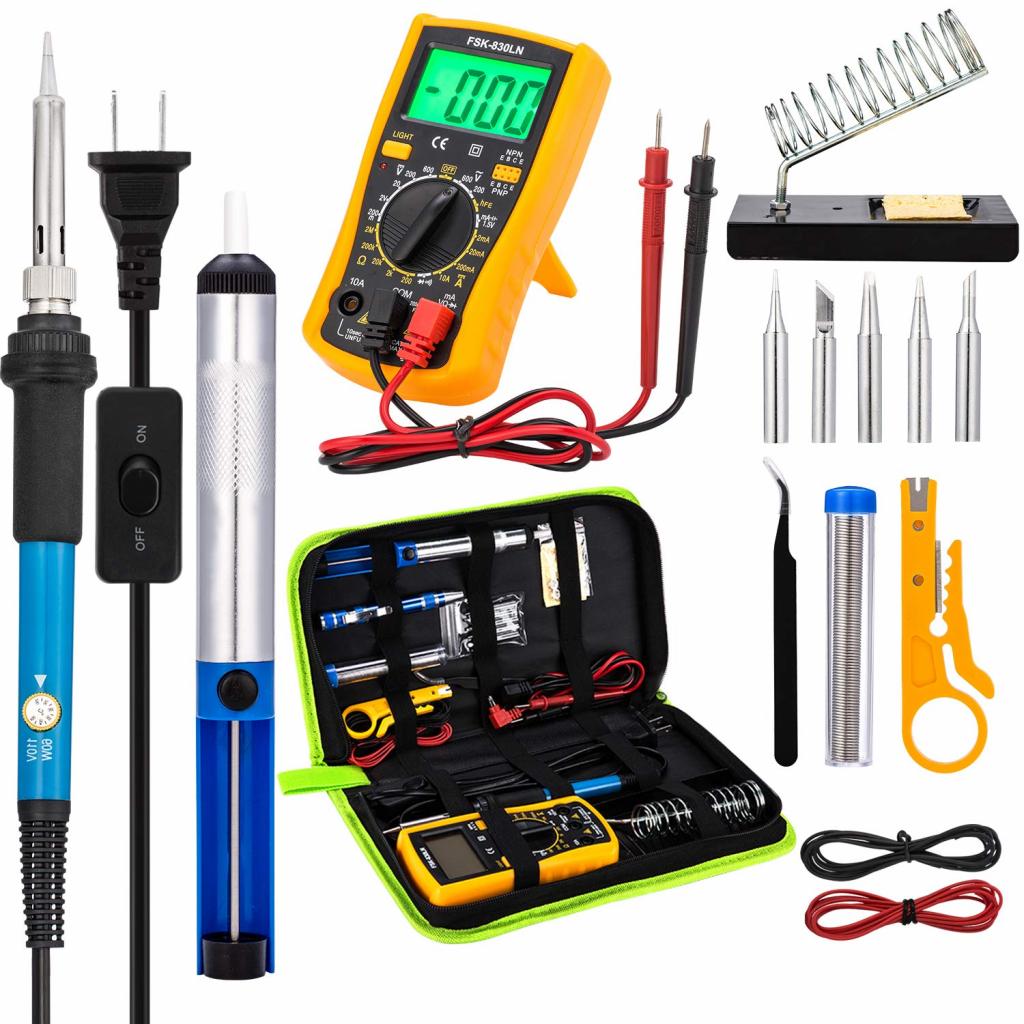 Classification of soldering irons by power

By power, soldering irons can be divided into the following groups:

There are several ways to solder microcircuits from a printed circuit board, which have their advantages and disadvantages. What method to apply in a specific situation should be decided by the amateur himself, based on his experience and the technical capabilities of the equipment.