Altai Territory is a huge territory in the southeast of Siberia. The stretch reaches 600 km from west to east and approximately 400 km from south to north. Due to its size, the Altai Territory boasts a variety of terrain. These are mountains and foothills, plains and steppes, taiga thickets and forest-steppes, ravines. Many large rivers flow on the territory: the Ob and Biya, Katun and Charysh, more than 13,000 lakes (large and small) are located.

Naturally, such blessed places were chosen by thousands of birds. There are more than 320 species in the Altai Territory of birds. There are waterfowl and forest, predatory and migratory, rare, listed in the Red Book. There are birds that settle in the southern regions, and there are lovers of cooler weather.

In the article, we will consider birds of the Altai Territory with photos and names, take a closer look at species that are rarely found in other natural zones, little known to a wide readership.

Birds of rivers and lakes

The territory of the Altai Territory is saturated with water resources, so many birds settle near lakes and on river banks, eating small fish or frogs. Many of them are widely known, while others are unfamiliar. This is mallard, red-headed duck and teal-whistle, large merganser and shirokonoska. These are common birds of the Altai Territory, outwardly similar to domestic ducks, only the plumage is more vivid and diverse. Many hunters see in them only the object of fishing, since their numbers are large, hunting is permitted by law. 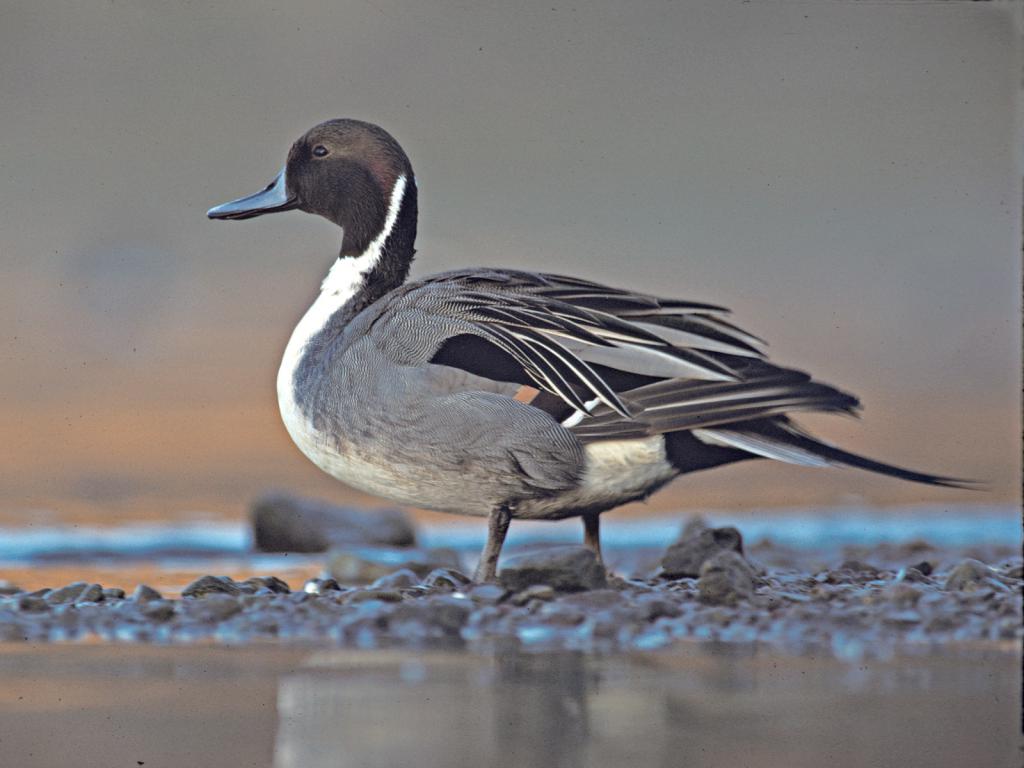 In the photo above you can see a beautiful bird of the Duck family called pintail. The tail feathers have sharp edges and resemble a sharpened awl, hence the name of the species.

Other waterfowl of the Altai Territory are admired, they are protected in every way. This is a screaming swan and a loon, a pink and curly pelican, several species of grebes, and a great cormorant. Let's get to know better the waterfowl, which has the original name: common gogol.

The name of the bird of Altai Krai reminds many famous writers. It’s correct to call her ordinary gogol. This is a bird of the Duck family, of medium size, with bright white and black plumage. The large head is located on a short neck, the beak is also small. Nests grow in hollows of trees at high altitudes (up to 15 m), although sometimes it occupies burrows of hares dug right in the ground, likes to spend time near water. Gogol live in small groups, only during molting form numerous flocks. As a rule, 5 to 13 eggs of a greenish hue are laid. 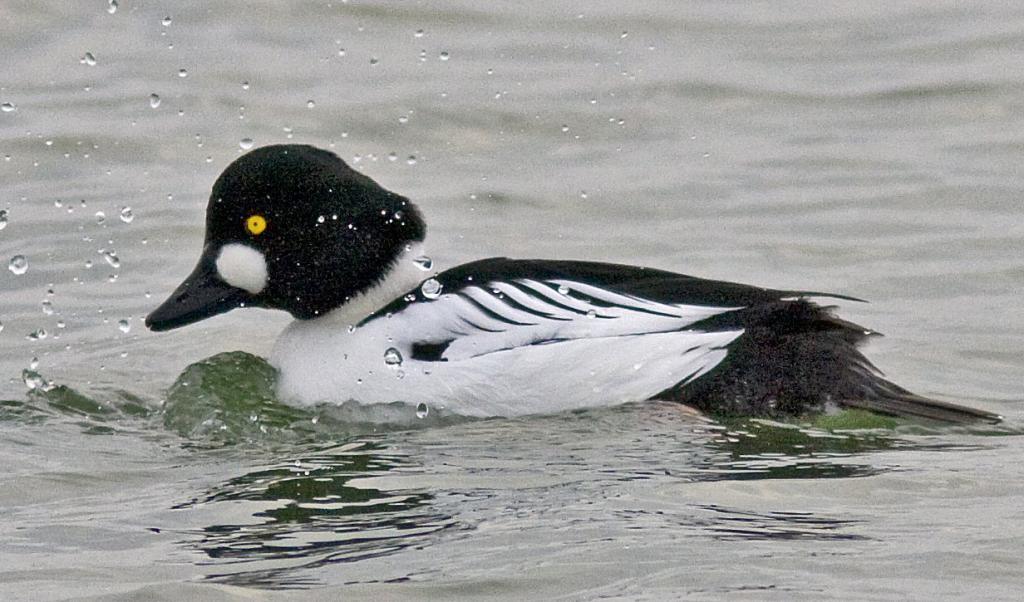 It is considered a migratory bird, but it does not fly far from its usual place of residence, it searches for ponds that do not freeze for the winter, and there it stops for the winter. It is interesting that males and females spend winters in different latitudes, so for breeding already occur in the spring in the old place. Nests have been used for several years. The breeding season is from April to May. Only the female hatches offspring. Gogol feed mainly on invertebrates. Chicks begin to fly out of the nest around August.

There are also a lot of birds of prey living in the Altai Territory, as there is enough food for them. These are day and night hunters of different sizes. The body of such birds is adapted for the successful catching of small animals. Sharp claws and a hook bent beak will not miss the caught prey. These are species of falcons and hawks, ospreys, and owls. We list some of them: the boreal owl, the eared owl, the golden eagle and the goshawk, the black vulture and the quail, the spotted eagle and buzzard, the steppe eagle and the burial ground. 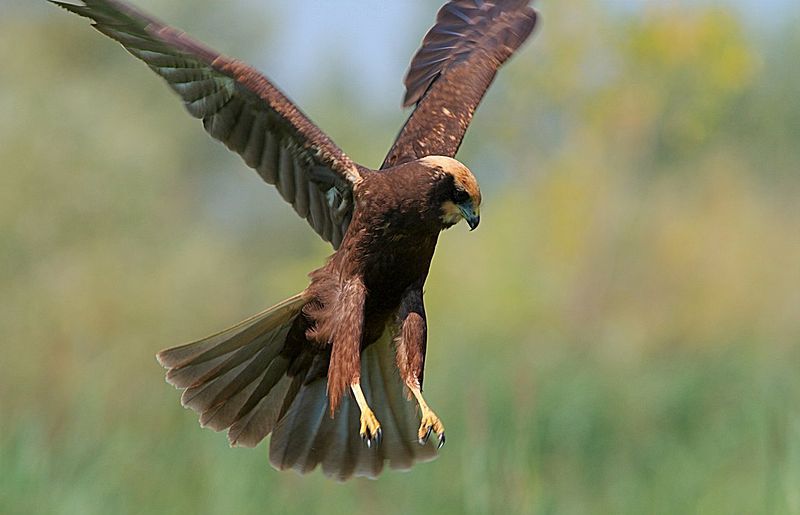 In the photo, the bird of the Altai Territory - swamp lun. But there is still field, meadow and steppe. Predators feed on small birds, lizards, frogs and small vertebrates. Let's take a closer look at the bird, whose diet, as a rule, consists of snakes.

This predator is a rather rare bird of the hawk family. Because of fear, it does not approach a person, it is considered an endangered species, therefore it is listed in the Red Book of the Altai Territory. The size of the individual is from 67 to 72 cm, while the wingspan reaches 190 cm. The coloring of the male and the female is the same, however, the female is slightly larger.

For living, snake-eaters have chosen steppe and forest-steppe zones, a bird hunts over marshy places and valleys. 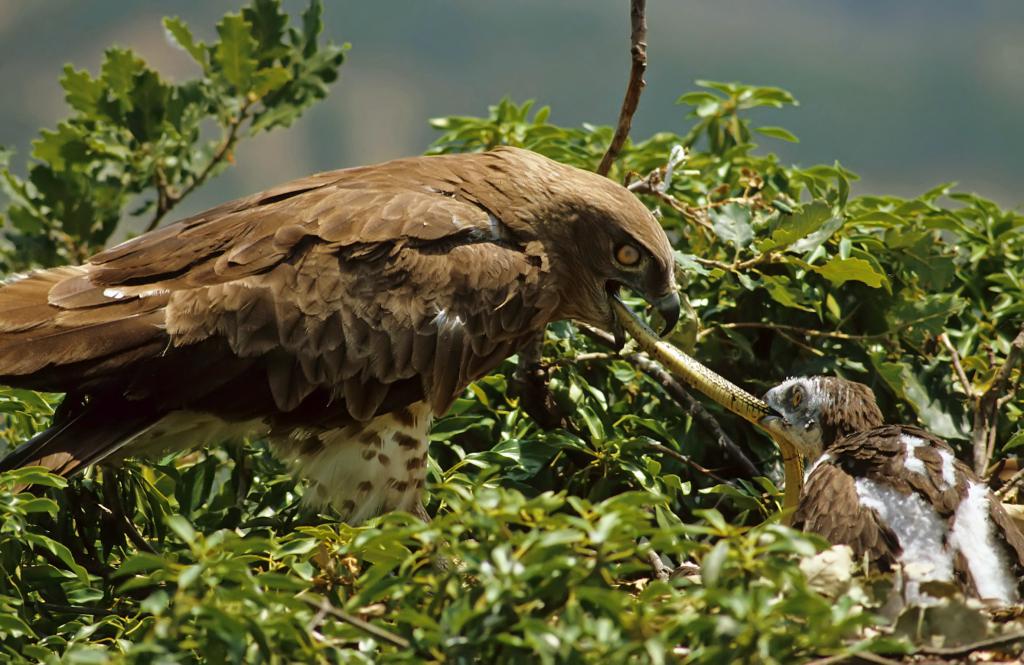 Parents feed the chicks with snakes: snakes, vipers. At the same time, they can bring both live prey and swallowed. Chicks pull their lunch from the throat by the tail, the process can take up to 10 minutes. Ingestion takes even longer - 30 minutes.

Many birds do not have membranes, but live near the water and hunt along the coast. This is a demoiselle crane and heron, a bittern and a spinning top, a loaf and even a flamingo, a very rare bird - a black stork, which can be seen in the photo below. 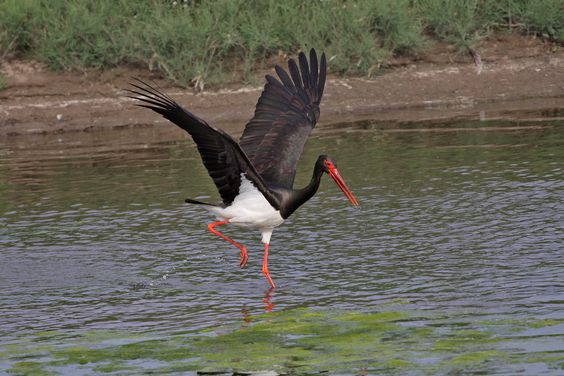 Such birds do not know how to swim, but elongated legs allow them to calmly walk in shallow water and look for fish or small arthropods swimming by. Separately, it is possible to note the kingfisher, which is the most deft fisherman. Sitting on a tree branch above the water surface, he quickly dives and grabs a small fish with his beak. He does not have to wander around like a drink, but luck accompanies him more often. Let's take a closer look at a photo of a bird in the Altai Territory called a spinning top or a little bittern, we will get to know it better.

This is the smallest heron in the Altai Territory. The photograph below shows the male top, but the female is smaller and gray-brown in color with buffy spots on the body, a yellow beak. The growth of this bird is only 36 cm, and weight - up to 140 grams. This is a migratory bird wintering in Africa. 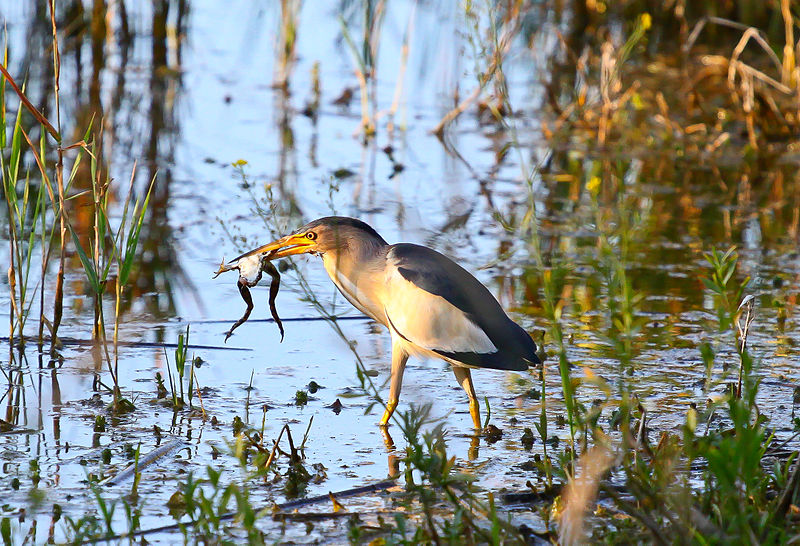 A small bittern lives in the thickets of reeds and reeds, hiding from prying eyes, therefore it is considered a very shy bird. It flies quite rarely and low, over short distances. It feeds on small fish, frogs, invertebrates, and sometimes can feast on the neighboring chick.

Nests are equipped either on trees or in dense reed beds. Parents hatch from 5 to 9 eggs alternately, replacing each other for hunting. A month after hatching, the chicks already try to fly and leave the nest.

In the forest-steppe, in coniferous and deciduous forests of the Altai Territory, many small representatives of birds live. This is a hazel grouse and nightingale, a dove and a turtledove, a cuckoo and a bluefin, a goldfinch and a swift, woodpeckers and a verticeshell, a thrush and a starling, rooks and crows, magpies and many others. In the forests there is a lot of food and shelters from the eyes of predators. Many birds have chosen the lower tiers of the forest and meadow. These are black grouse and capercaillie, quail and corncrake, swallows and larks. 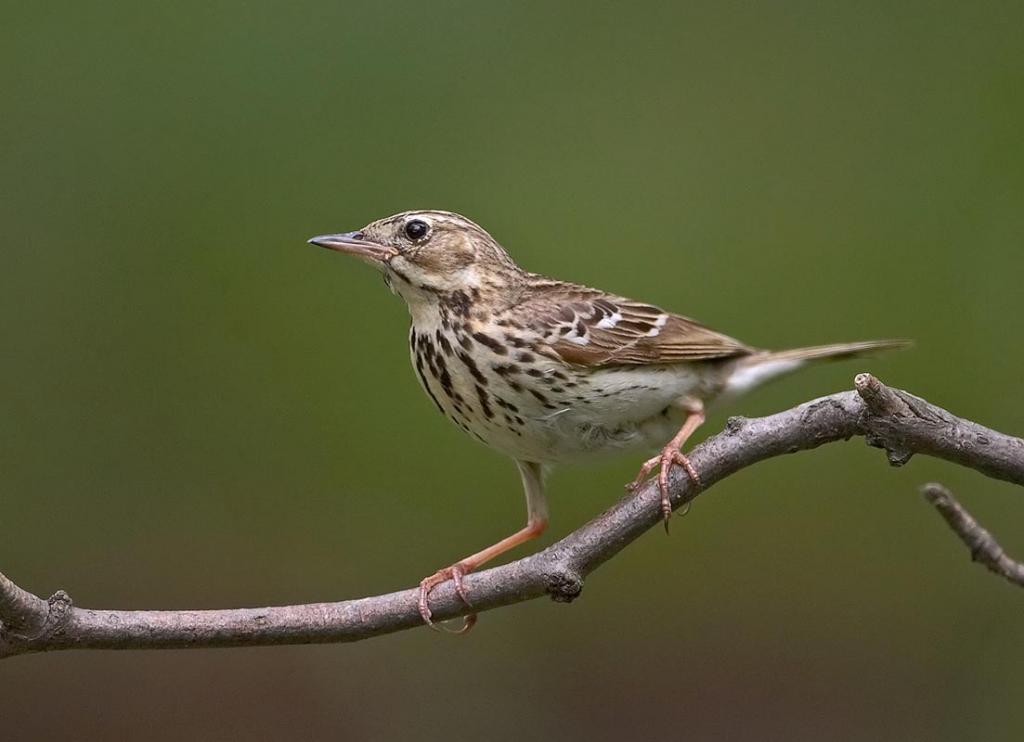 In the photo above you can see the forest horse. This migratory bird of Altai Krai is smaller than a sparrow. Winters in Africa, in the Sahara region. He loves open glades or copses, settles near the felling of trees. It flies well, and when courting a female it is interesting to circling in the air with wings spread, like a parachute.

Let's take a closer look at a small bird of the Corvidae family: a pine nut or a nut, the photo of which is below in the article.

The size of the cedar is smaller than that of the jackdaw, but the beak is longer and thinner. The coloring is mottled, on a brown background there are many white spots. The color of the cap on the head is plain. It weighs up to 190 grams with a body length of up to 30 cm, of which about 11 cm falls on the tail. The female is a little lighter, therefore spots are not so brightly distinguished, as at the male. 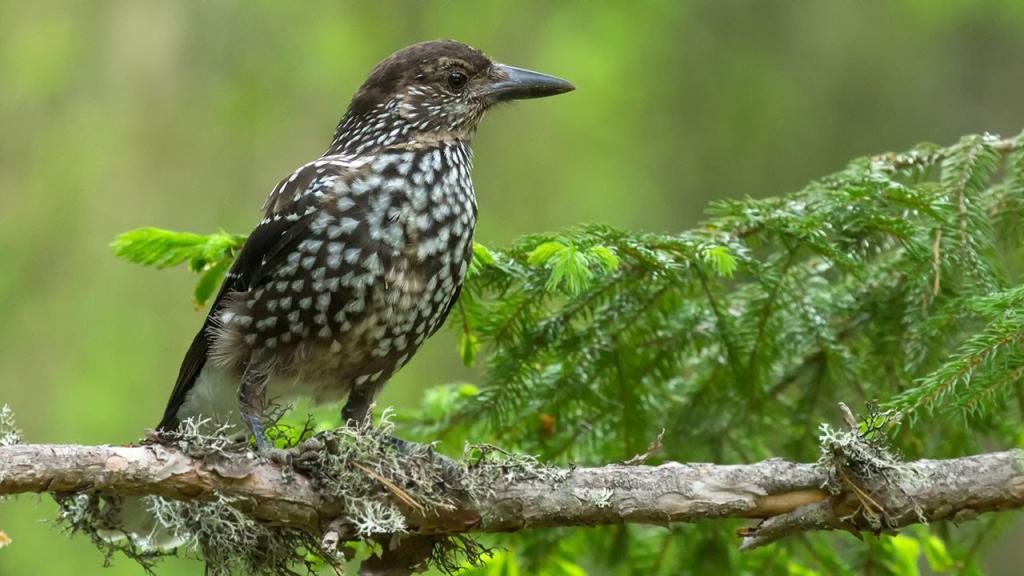 The main component of the diet of the bird is nuts, acorns, berries and seeds of conifers, but sometimes they catch insects and small representatives of invertebrates. Nests are arranged in dense forest thickets. Only the female hatches offspring, and the male takes care that she does not starve.

The breeding season begins in April-May. The female lays 3 or 4 eggs of an oblong form of light green color. Hatch the laying of birds for up to 20 days, chicks fledge already by the end of June. Pine forests love loneliness, rarely you can see small groups. If there is little food, then they can fly to the nearest forests.

Due to changes in natural conditions and the consequences of human activities, many species were on the verge of extinction, so it was decided to add them to the list of birds protected by state services: in the Red Book of Altai Territory. A black-throated loon and a red - necked grebe, a gray-toed grebe and the spinning top described above, a large white heron and a loaf, pelicans (pink and curly), a black stork and a flamingo, a red-throated goose and a small chicken got into it. We will not list all 84 species, but their number makes us think about the need to love not only ourselves, but also to take care of our smaller brothers. 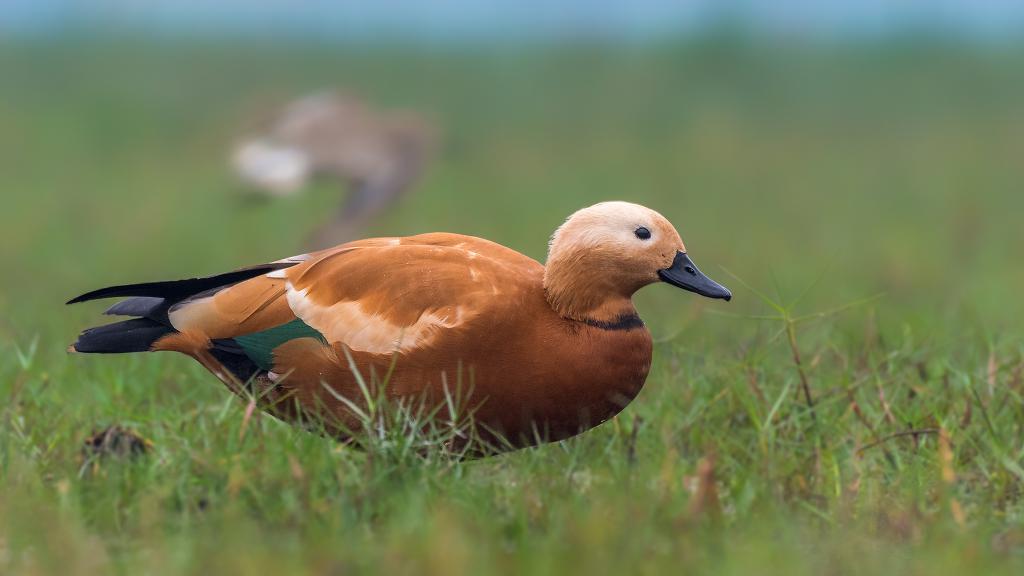 In the photo above you can see the cinder. These are large ducks with bright orange plumage, wintering in Issyk-Kul and southern China.

The article provides a brief overview of birds nesting in the Altai Territory. Take care of rare birds and the nature of your native land!