A manicure with lines belongs to the style of geometry, it is simple and fits both monophonic nails and variegated combinations of gel polish. Beginners are able to lay out the lines in the selected order on a prepared basis, using rolls with adhesive tape. They are commercially available in a large assortment, you can always choose the right color to match the varnish.

Fashionable manicure with stripes is much more difficult to complete. To draw thin lines using stencils, stationery tape, masking tape. Experienced craftsmen can draw straight lines with a thin brush, but this is not easy, because they must be clearly even and of the same width. If the geometric ornament has a simple pattern, then making it a lot easier.

In the article, we will consider several interesting options for manicure with lines, how to apply them on the nail plates, what tools are more convenient to use, what additional materials will be needed to work. The presented manicure samples will give a more complete picture of the methods of applying strips to the nail.

The easiest way to do manicure with lines is to use purchased rolls. Silver and golden ribbons look beautiful on nails, often masters use black material.

It’s easy to work with adhesive tape. First you need to prepare the plates and cover with background gel polish. After drying under the UV lamp, cut off the required length of the strip with scissors and fix it in the chosen place. 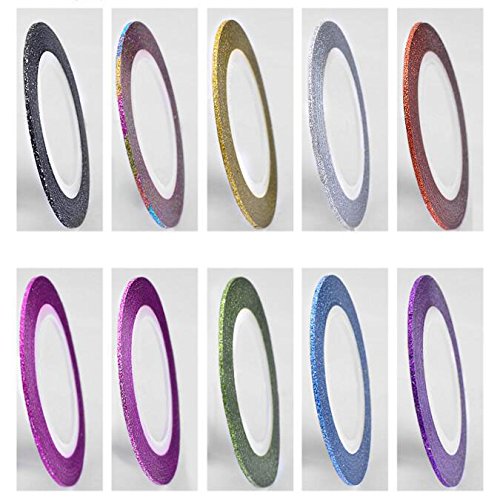 Do the work carefully, take your time. Use your fingers to stroke the tape along its entire length so that it is firmly fixed. At the edges, cut off the excess with scissors and carefully strengthen the edges near the tubercles of the nail. In this way, all segments are superimposed alternately. They are placed either parallel to each other, or forming corners and cross lines. Drawing can be any. So that the strips do not peel off, it is most reliable to cover the manicure with a layer of fixative on top and additionally dry the nails under the lamp.

If you will be doing manicure with lines with brushes, then prepare ordinary stationery tape. Any geometric shapes or simple strips are cut and glued to the prepared nail. The voids are coated with a second layer of varnish of a different color. Then the adhesive tape is removed, and the joints between geometric shapes are smeared with a thin brush, for example, black varnish.

This season, manicure combining black and white primary colors is very fashionable. It is suitable for both short and long nails. This design of nails with lines looks gentle and elegant. Such lines are drawn with a thin brush. 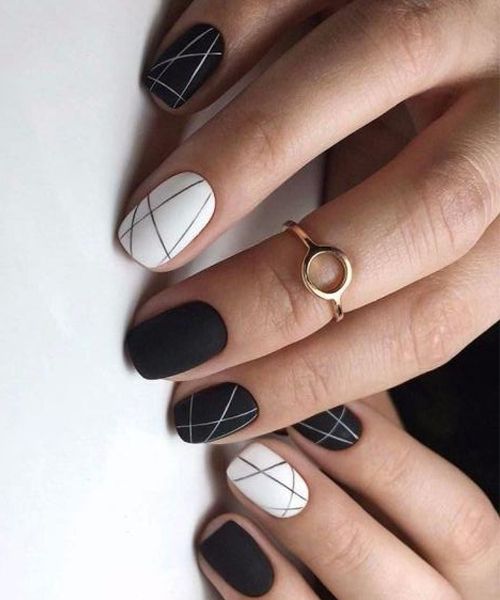 The pattern should be negative to the background coverage. If the varnish is black, then the strips are painted in white, and vice versa. Gel polishes use a not too thick consistency to make it possible to draw a thin strip in one movement of the brush. You can pre-train to use the brush and make thin, but even lines on plastic nails, and only then draw on your own.

Original idea of ​​manicure with stripes.

Looks great manicure in a combination of black and bright yellow gel polish. Drawing can be made in several styles. This is a French manicure, when the edges of each nail are surrounded by thin lines, and stripes with circles at the ends in the style of geometry.

Use a thin brush and dots with a tip in the form of a ball at the end. It is dipped in a drop of gel polish and leave an imprint on the surface of the nail plate. It is not difficult to do such a manicure, but it looks quite original.

Such a manicure with stripes, according to reviews, is very easy, even novice masters will cope. After hygienic processing of the cuticle and giving a beautiful rounded shape to the nails, wipe the surface with a degreaser and antiseptic. Then the background layer is applied with white gel polish. After drying the nails under ultraviolet rays, you need to make a few strokes of blue and re-dry the varnish layer. 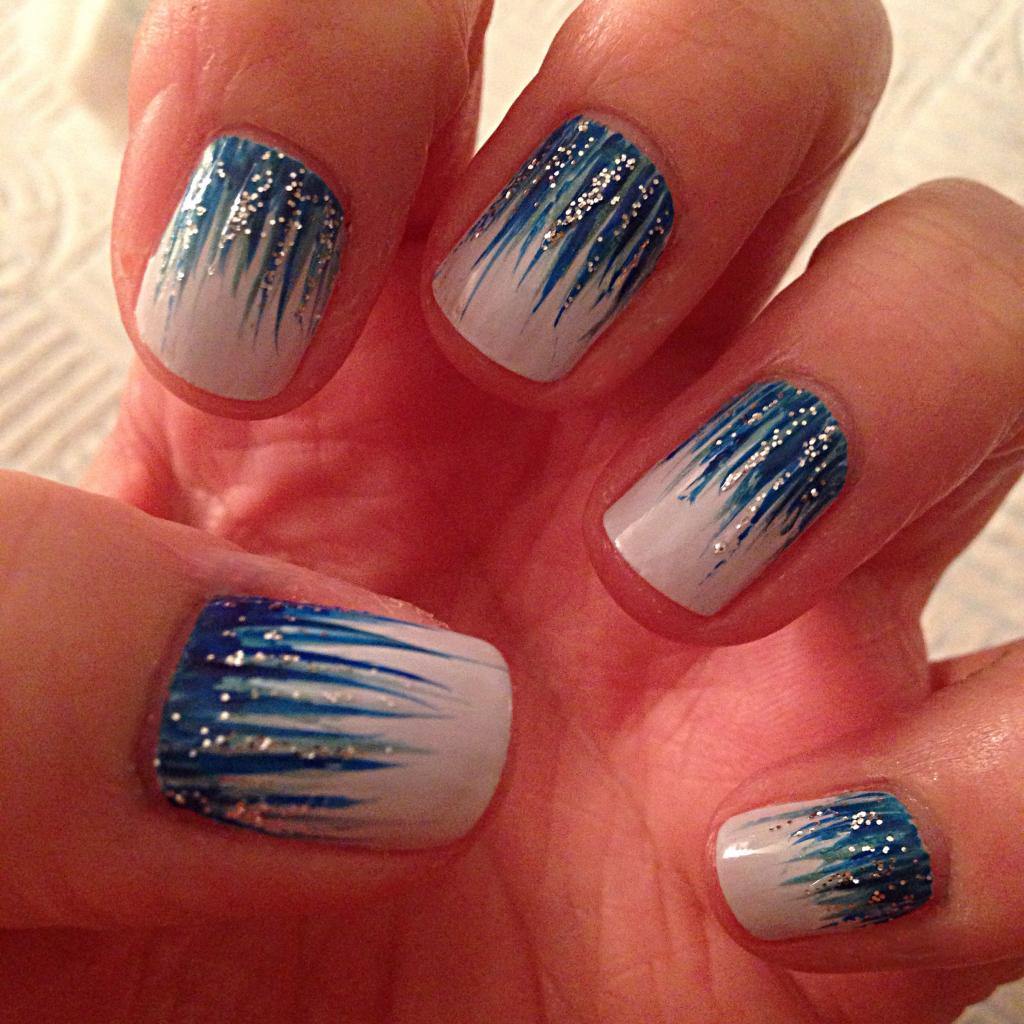 The next step will be applying touches of turquoise color. You need to move the brush from the base of the nail towards its extreme line, but not to the end, but a little further than the middle of the nail. After drying, make a few strokes of the varnish with sparkles, adding gloss to the nails. When the varnish is dried, apply a top coat. This original idea of ​​decorating manicure with stripes is also used with other colors, however, choose gel varnishes that are harmoniously combined with each other.

The deep burgundy color of gel polish, which covers most of the nails on the hand, goes well with delicate frieze and silver colors. Thin burgundy strips are made using duct tape. First, a layer of dark varnish is applied to the nail and the surface is dried under the lamp. Then two intersecting strips are glued, and the nail is covered with a light shade. Carefully peel off the strips and dry the varnish. 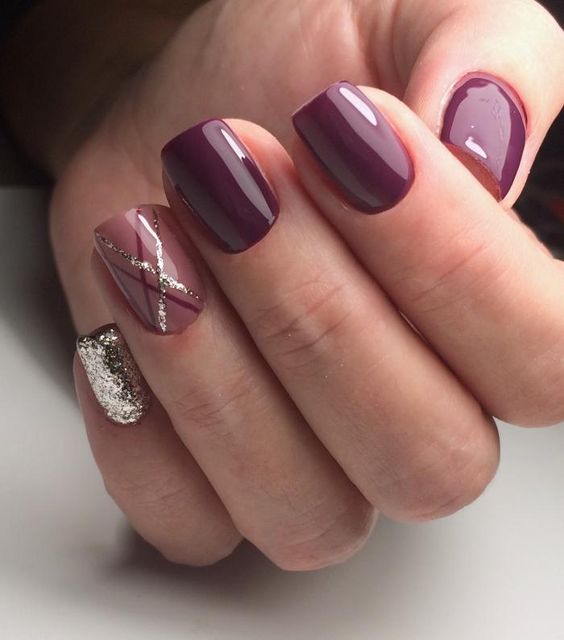 Strips sprinkled with small spangles look spectacular on the nails. According to the reviews of the masters, for their attachment, you must first draw a strip with a sticky base layer. Drying is not necessary, and immediately sprinkle the greased place with powder. You need to slightly press the sparkles with your finger and dry the base layer under the lamp. Extra sparkles are removed with a thin brush. Often after powdering, the nails are no longer covered with anything, then the bright stripes look voluminous. The little finger is covered in the same way.

The next version of the manicure looks festive and spectacular. Suitable for fashionable nail art for young girls and older women. The pattern consists of separate geometric figures, which are made alternately. After each color, the nails must be dried so that the varnish does not spread to the adjacent drawing. The thumb, forefinger and little finger are made plain, coated with saturated red gel polish with a glossy surface. 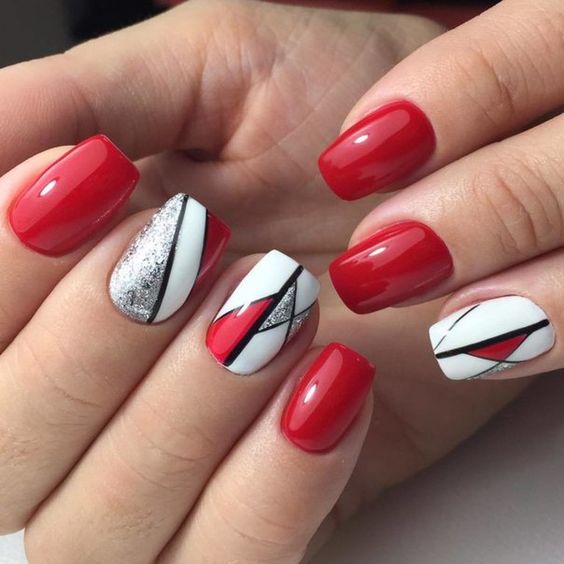 Particular attention is paid to the ring and middle fingers. That part of the nail, which has a different color, is covered with a strip of stationery tape. After applying the necessary varnish to the selected part of the nail, it is necessary to get rid of the adhesive tape, and only then dry the nails under the lamp. Thin black dividing lines are drawn by hand with a thin brush.

It is very simple to make a beautiful manicure using ready-made drawings. They are sold in sets, and come in different colors. They look on the surface of the nail quite original. Each picture is drawn on a thin transparent film. To stick, you first need to cut the image, trying on the size of the nail. Further, the sticker is placed either in warm water to soak the paper base, or on a damp cloth with this side down. After hygienic treatment, the nail is pre-coated with a background layer and dried under a lamp. 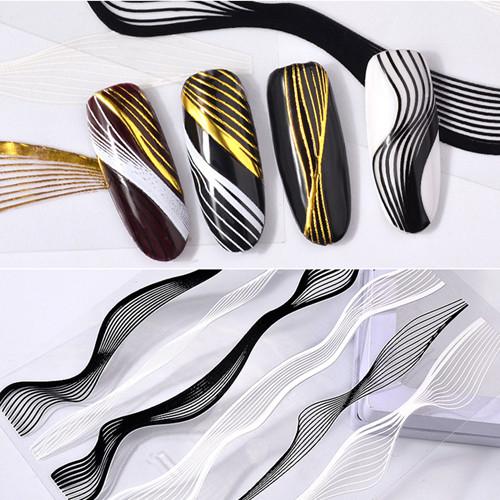 Soaked paper is removed from the back of the sticker with a light touch of a lint-free napkin. Wavy stripes are superimposed on the surface of the nail and covered with a top layer. After drying, it remains only to wipe the nails with a wash and get rid of the sticky layer. 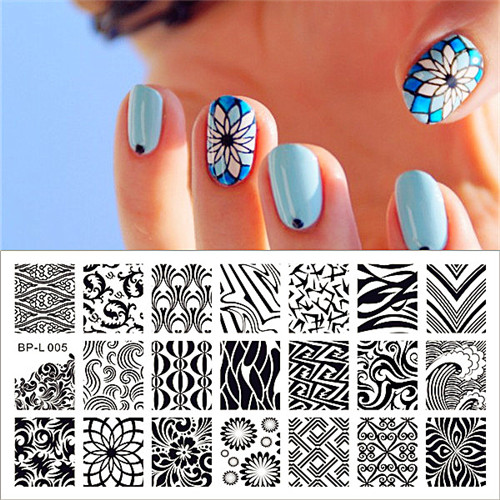 Since the picture is printed, and not drawn by hand, the manicure looks neat and stylish. The only condition is that the top layer should seal the edges of the sticker well so that peeling does not occur.

Strips located diagonally and meeting with the opposite line slightly offset from the center look original. Place them with a thin brush alternately, starting from the base of the nail. The first step is to cover the plates with background gel polish. Then dry the nails for 2 minutes under the lamp. Next, work is done on thin lines. Try to keep the distance between them the same, then the picture will look neat.

The article gives step-by-step instructions for manicure with stripes. Choose your favorite method of applying them to the surface of the nail and try to make beautiful nail art yourself. Have a good start!