Calculation of the expansion tank: calculation rules with examples, types of tanks, appointment and expert advice

A tank for expanding the coolant is a necessary element of the heating system. In the design process, the question arises: how to calculate the expansion tank for heating, determine its volume and dimensions? The parameters will depend on several factors that will be studied in detail in the article.

What is the expansion tank intended for?

The fluid circulating in the heating system expands significantly when heated. For different coolants, this coefficient will differ. For example, water, as a coolant, is much more efficient. It has a lower coefficient of expansion during heating and higher heat transfer than antifreeze based on ethylene glycol. Also the increase in volume depends on the operating temperature. 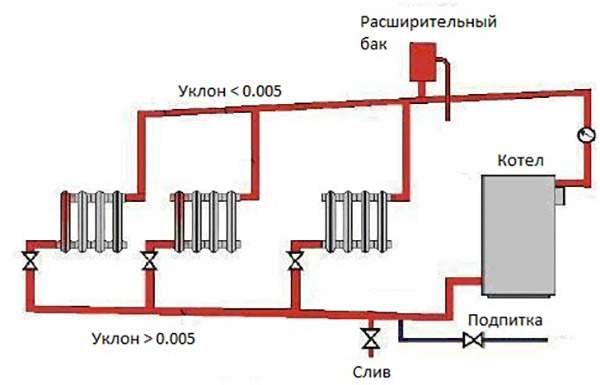 To compensate for the increase in the liquid level in the system, an expansion tank is built in, the calculation of which will depend on:

Currently, there are three varieties of expansion tanks. The most antediluvian is used in the gravitational heating system. It is an open tank. It is installed at the highest point and serves not only to collect excess fluid, but also helps to remove air from the system. 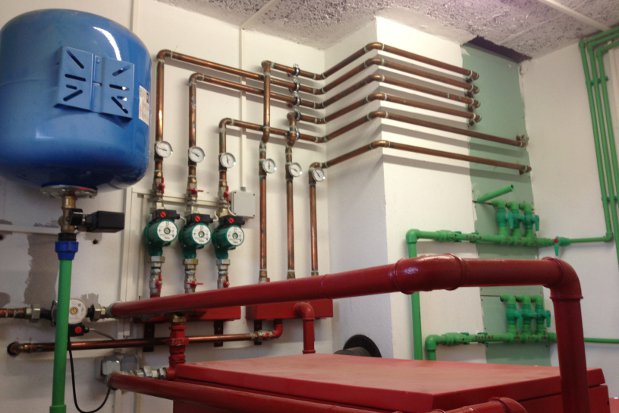 Such heating works only on water, because the rest of the coolants are quite toxic. Their use in an open system will lead to vapor poisoning. The main disadvantage of an open system is the freezing of water at a low temperature. Such a house cannot be left in the winter for several days without heating. If this happens, the water that expands during freezing will break the heating pipes.

The calculation of open expansion tanks is based on the coefficient of expansion of water, for which this value depends on temperature: the higher it is, the greater the value. To calculate the volume of liquid displaced during heating, you need to multiply the coefficient corresponding to the operating temperature by the amount of coolant in the heating system. This will give the required volume of the expansion tank. 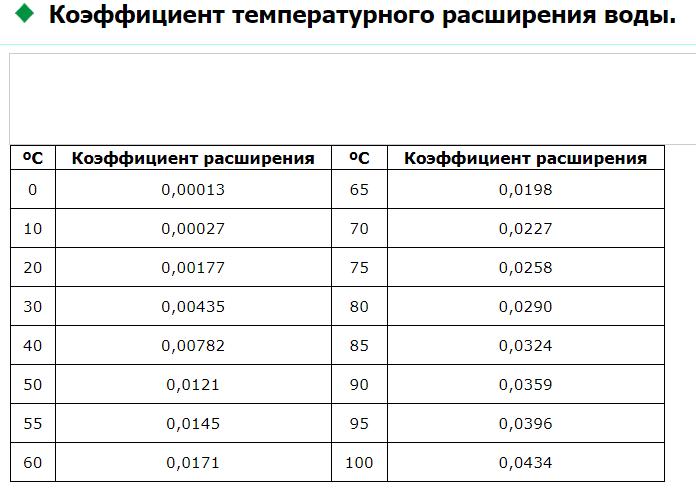 For an open system, making a tank size with a margin does not make sense, since such a design provides a bypass neck, which is connected to the sewer. Excess water flows into it if the temperature exceeds the nominal value.

The next type is expansion tanks of a closed type. They are used both in gravity systems and in heating with forced circulation. The main difference between closed tanks is their complete tightness. This is done to prevent contact of water with atmospheric air, which contains a large amount of oxygen, which adversely affects the condition of the pipes. Excess pressure here is vented to the atmosphere using safety valves.

The calculation of the expansion tank of this type occurs, as in the previous one. However, here you need to add the amount of air that will be compressed when water is displaced into the tank. Unlike liquids, gases have significant compressibility. Therefore, the volume for air in the tank can be left small - about 30% of the volume for water.

How a membrane expansion tank works

The main variety of modern heating systems is forced heating with a membrane expansion tank. It differs from the usual sealed container by the presence of a rubber layer separating the liquid part from the air. 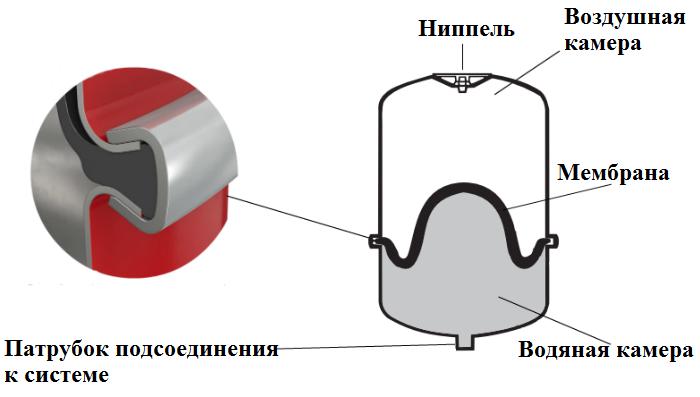 When the system is completely full, the liquid in the tank reaches the upper level of the membrane. During heating, the coolant begins to expand and, overcoming the resistance of the membrane and air, rises to the upper level of the tank until the compressed air pressure and the coolant pressure equalize. If the antifreeze pressure significantly exceeds the permissible values, the safety valve of the safety system will operate.

When calculating the expansion tank for closed heating, an amendment is made to the expansion coefficient associated with the use of antifreeze. It increases its volume by about 15% more water.

When determining the size of a membrane-type tank, you can follow a simple path. Knowing that the coefficient of expansion of water at a temperature of 80 degrees is 0.029, as well as the volume of the system, a primitive calculation can be made.

Let's say 100 liters in the system. Multiplying the amount of liquid by a coefficient, we obtain an expansion volume of 2.9. For a simplified calculation, it is necessary to increase this value by 2 times. In addition, we recall that the expansion of antifreeze is approximately 15% more than water, and we add this value. It turned out about 7 liters.

For a more accurate calculation of the expansion tank, you should use the formula:

V is the required volume of the membrane tank for the heating system.

Ve is the volume of coolant obtained by heating the system. This is the total of all heating appliances, pipes, boiler.

Vv is the volume of the water lock in the tank. In other words, the amount of fluid that is always present in the reservoir as a result of hydrostatic pressure. About 20% in small tanks and about 5% in large tanks. But not more than 3 liters.

Po is a constant pressure. Depends on the height of the liquid column in the system.

Pe is the maximum pressure that occurs when the safety valve trips.

The calculation of the expansion tank is a simple process available to anyone who is familiar with simple arithmetic operations. It is only necessary to take into account the design of the heating system, its volume and type of coolant.