Abandoned and emergency buildings in most people cause very unpleasant feelings, the desire to get past deserted structures with empty eye sockets as soon as possible. But there are those in whom such buildings incite a burning curiosity. Fans of strolling through such unusual places call these buildings the affectionate word "abandoned". Among the fans of "abandoned" informal youth, ruffers, stalkers, diggers. There are those who just dream of organizing a photo shoot against the backdrop of ruined interiors, which are more like scenery for psychological thrillers and horror films.

For several years, the abandoned hospital in Zheleznodorozhny was especially popular. It is about him that we propose to talk today. 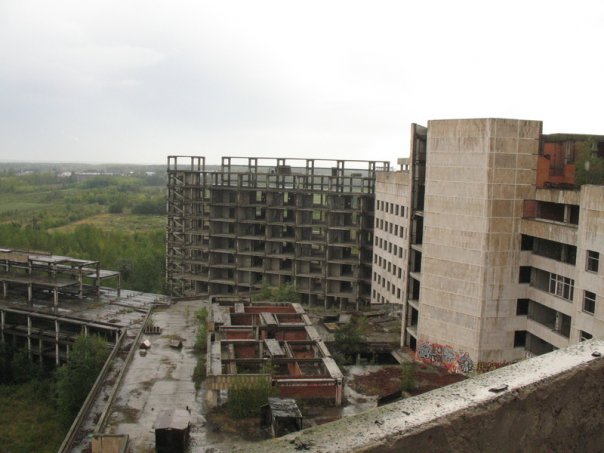 15 hectares in the Olgino microdistrict of the city of Zheleznodorozhny were granted to the State Security Committee for unlimited use back in the early eighties of the last century. The history of the “abandoned” itself begins in 1981. Then, on an area of ​​15 hectares, large-scale construction work began. It was supposed that the Central Hospital of the 4th KGB Directorate would appear here. The advanced multifunctional hospital was supposed to be a whole complex of buildings interconnected in the form of a hexagon. It was planned that at the same time about three thousand people could be accommodated here. 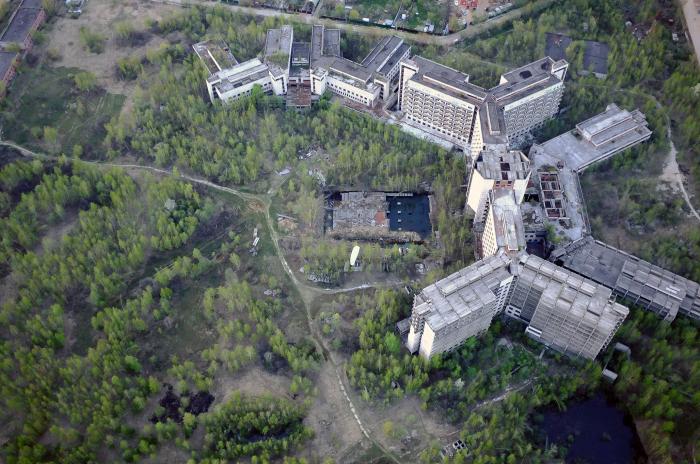 The military was engaged in construction work. It was they who equipped a bomb shelter under the hospital, whose wall thickness was about a meter. We carried out electricity, delivered and installed plumbing. According to eyewitnesses (the abandoned hospital in Zheleznodorozhny even has its own page on social networks), it was already possible to live in this bomb shelter. It is worth noting that it was located throughout the territory under the hospital, there were exits to each building.

End of an era and construction

The story of the abandoned hospital in Zheleznodorozhny ended before it began. Construction ceased with the end of the Soviet era in September 1991. Construction crews were dismissed, plumbing was dismantled and sold from the bunker, and the bunker was flooded with water, after which all entrances were brewed. True, local residents say that another reason for stopping construction work could be the fact that a swampy place was chosen for the hospital. The construction was simply abandoned, without even thinking about preserving it in order to continue after years. 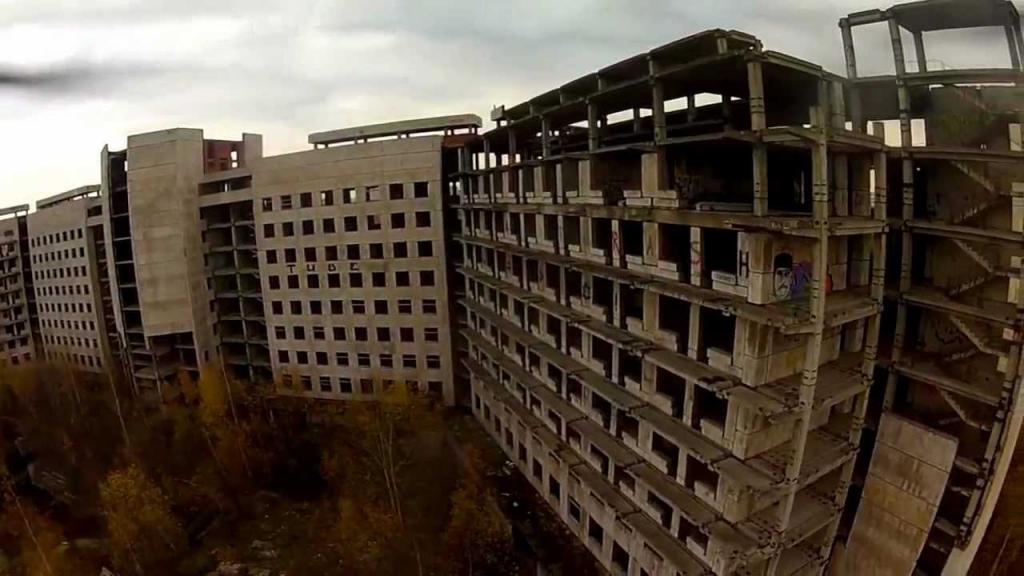 The popularity of "abandoned"

Visitors to this "abandonment" noted its grandiose appearance; one could often hear that one could feel KGB-wide here. For a long time to assess the state of long-term construction was quite problematic. The thing is that different sections of the unfinished hospital of the KGB of the USSR were in different conditions. For example, the left wing, where only the frame was built, was completely unsuitable for visits. But the buildings in the right wing and the central part for many years remained in relatively good condition. Even though the supporting structures rusted, they were virtually unaffected. Security guards kept an eye on the “abandonment,” however, private security officers were peaceful towards uninvited guests, such as dog handlers, paintball players and graffitists, and therefore there were no problems visiting the hospital.

Flooded collectors, numerous walkways and tunnels - a combination of all this makes the abandoned hospital a mysterious and even mystical place. It is not surprising that the unfinished overgrown with a huge number of legends and scary stories. Rumor has it that before the Satanists gathered here, one of the visitors to the object noticed a light, similar to welding, in one of the parts of the hospital. Someone even said that cannibal dogs were guarding the building. However, all this is just a figment of fantasy. 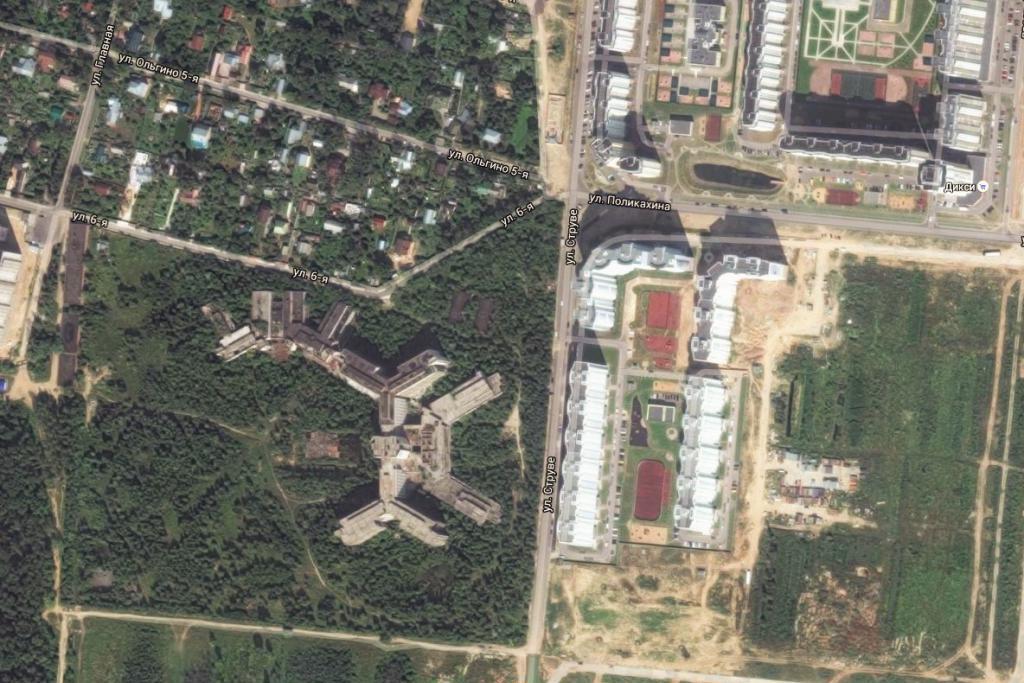 However, a truly terrible case did occur here: in 2015, a schoolboy from the city of Zheleznodorozhny committed suicide after he received the results of the exam. Parents were not at home at this moment. The 16-year-old guy left a note for them in which he indicated the place where they would find him. The place for suicide was precisely an abandoned hospital in Zheleznodorozhny. Here the student went up to the third floor and jumped down. Parents discovered his body late in the evening.

Another mystery is the presence of the so-called metro-2 under the "abandonment". Of course, there can be no official information about secret underground structures under the capital. Therefore, all the assumptions about the existence and extent of the secret metro, also called the D6 system, are merely attempts to generalize information obtained from sources that seem at least a little reliable. It is believed that the construction of the D6 system fell on the 50-60s of the last century, and it was completed in the mid-eighties.

Metro-2 was built to provide transport links to the objects of the Ministry of Defense, which are located in the center of Moscow, with underground cities and command posts. Another version is the evacuation of the first persons of the state. It is believed that traffic in metro-2 is single-track, because building two routes is simply pointless, because in case of emergency evacuation, the flow of passengers will be directed only in one direction.

Visitors to the abandoned hospital in Zheleznodorozhny say: a possible exit to one of the metro-2 stations is located just under this object. As evidence, they cite the fact that the hospital is constantly guarded, that it was intended for KGB officers (and it was this service that was engaged in the cultivation of underground lines). And the fact that no one could find the entrance to the metro-2, visitors to the hospital explain that it was concreted and flooded with water. But the Diggers did not lose hope for a long time: they continued to explore the underground floors and surroundings. 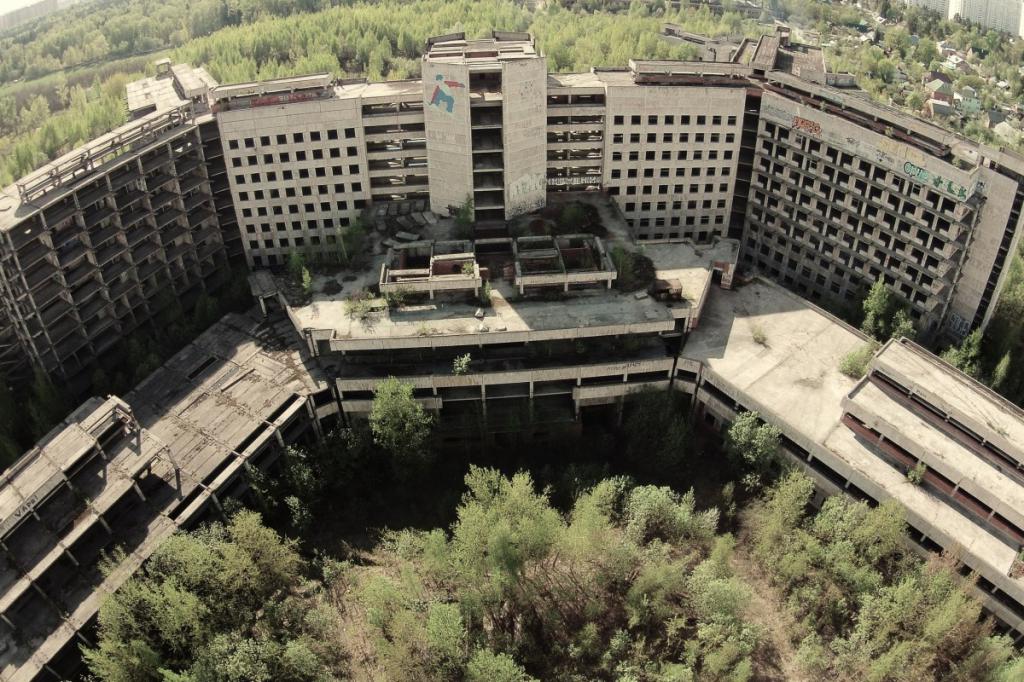 In the fall of 2017, information appeared in the media that the abandoned hospital in Zheleznodorozhny was demolished. It is worth noting that the city administration repeatedly appealed to the leadership of the Federal Security Service, which was in charge of this building. The management of Zheleznodorozhny asked to transfer the object to the balance of the municipality, however, over the course of several years no such decision was made. The development of the abandoned territory became possible only after the regional government joined in solving this issue. The dismantling of the building began in the fall of 2017. It is planned that the demolition will be completed in the summer of 2018. 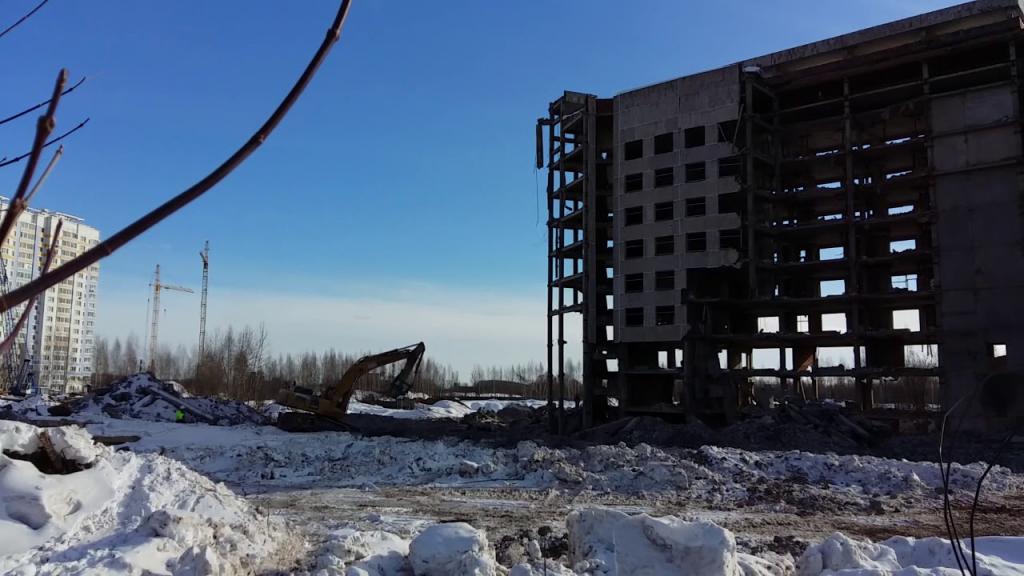 The further fate of this territory deserves special attention. It was originally planned that a medical center of all-Russian significance would be built on this site. It was planned that he would specialize in endocrinology, clinical and laboratory diagnostics, ophthalmology and nephrology. The possibility of building residential buildings near the center for its employees was considered. However, in November last year, Sergei Yurov (the head of Balashikha), during a live broadcast on the Balashikha 360 ° television channel, announced that a school would appear at the site of the abandoned hospital, with 1,100 children attending.