Coins "Zodiac Signs" in Russia and other countries

Not everyone understands that numismatics is not just collecting, but a science that studies the historical factor through coins. Numismatics has its roots in the Renaissance. Francesco Petrarch made a certain contribution to its development. He was keen on collecting antique coins. Contemporaries of the poet knew how big his collection was.

Over time, collecting coins has become a frequent occurrence. Many people choose it for themselves as a hobby. However, a collection of coins is not just a pursuit of rare specimens, it is a profitable business. Selling rare items makes good money. The modern numismatics market brings income up to 30–40% to copper coin holders. Those with silver or gold coins at their disposal can receive more than 100%.

What can our country boast in this regard? Sberbank of Russia has released a collection of gold and silver coins "Zodiac Signs". The entire line is a powerful investment tool. However, most people buy products exclusively in their collection.

The release of the Zodiac Signs coin line first appeared on the market in the early 2000s.

More expensive coins “Signs of the Zodiac” are made from 925 sterling silver. The circulation of gold coins amounted to 1,000 pieces for each denomination and sign. Silver products are issued in double circulation.

Coin decoration is one of 12 zodiac signs. The emblem is printed on the reverse. The obverse is decorated with the arms of Russia in the form of a double-headed eagle. The symbol is framed by dots. On the circumference are inscriptions denoting the face value. On the same side are the characteristics of the coin: sample, weight of material, year of issue. Coins "Zodiac Signs" in a variation from Sberbank do not have great value for numismatists. They can be used as a means for calculations of a traditional nature.

Due to the peculiarity of the front side, the coins of the “Zodiac Signs” are in demand among collectors. The restart of the line occurred in 2005. The high relief received detail, the back of the products remained the same. 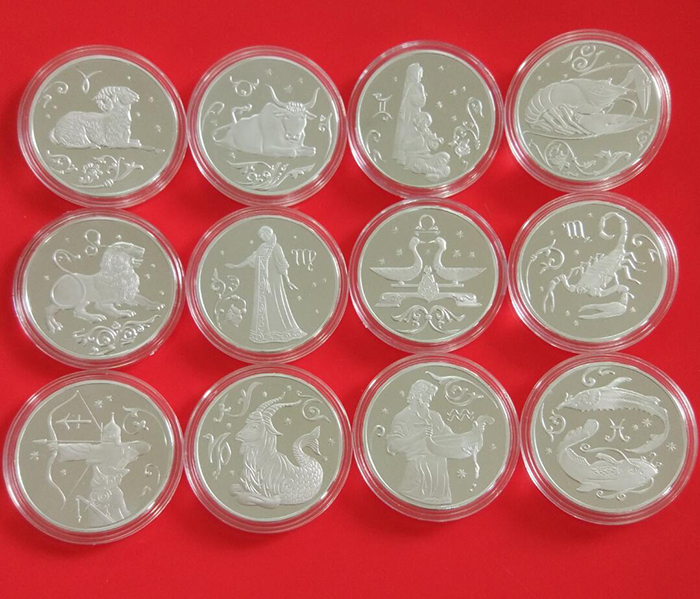 In fact, the cost of a single coin determines the value of the metal that formed its basis. In addition, the release date should not be overlooked. The price of the coin “Zodiac Signs” in the face value of 50 rubles. will be 13,700 rubles. Reselling the product can bring the owner about 110,000 rubles. The older the product, the more expensive it can be sold. Therefore, you cannot lose documents proving ownership and the date of acquisition. Coins "Zodiac Signs" with silver in the main composition will cost significantly less. It is important to consider that with resale, investment attractiveness will fall.

When making a purchase of products from the “Zodiac Signs” series from Sberbank, issued in a limited edition, the buyer must pay VAT. An exception may be coins issued by the Central Bank of the Russian Federation. Sberbank is not the only representative of financial institutions able to offer investment coins of a certain subject. The manufacture of metallic money with zodiac signs was successfully carried out by banks and other countries.

The collection of coins “Zodiac Signs” of the Belarusian Bank consists of three sets, each has 12 items. For the manufacture of various materials are used:

The obverse is additionally decorated with synthetic crystals. On the reverse side, the Belarusian coat of arms and face value: 1, 20, 100 rubles. Coins, which include precious metals, are equipped with a case and an insert with a description. 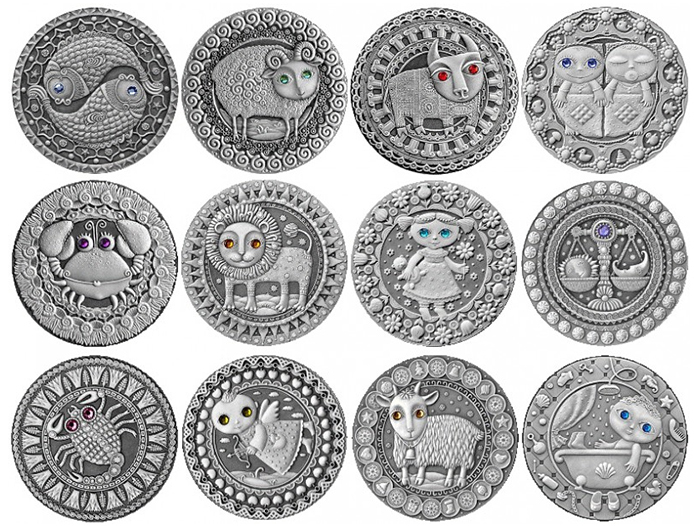 The line of silver coins “Zodiac Signs” created by the Armenian bank consists of 12 items. Precious metal has a 925 sample. Each 100 AMD coin was minted by the Polish Mint. Images are laser engraved. The background behind the zodiac element is stylized as a blue sky. The name of the mark is written in Armenian and in Russian. Each coin is equipped with a zirconium star. The coat of arms, denomination, date of issue, name of the country are engraved on the obverse, in addition to the two indicated languages, also in English.

Initially, the Zodiac Signs coin line from Transnistria envisioned 12 items. In addition to the main zodiacal emblems, an image of Ophiuchus was added, which allowed to increase the collection to 13 coins. Nickel was used for the manufacture of products. The face value of coins is 1 ruble. Zodiac engraved on the obverse. Under the sign there is a name in Russian and in English.

$ 2 coins are 33 x 55 mm. The metal of manufacture is sterling silver 925. The circulation of eight thousand units is distributed around the world. Coins of Niue are rare specimens, and therefore are in great demand. The author of the drawing for the obverse was Yutaki Kagai. A fantasy-style image is applied by laser engraving. The coins have an atypical rectangular shape and bright colors of the images. A mandatory attribute is the bright blue background of starry skies. The reverse is equipped with a portrait of Elizabeth II. In addition, there is the name of the zodiac, a symbol of the quality of the material of manufacture, release date. An insert has been issued for each coin with the author’s drawing, description, proof of ownership and authenticity. 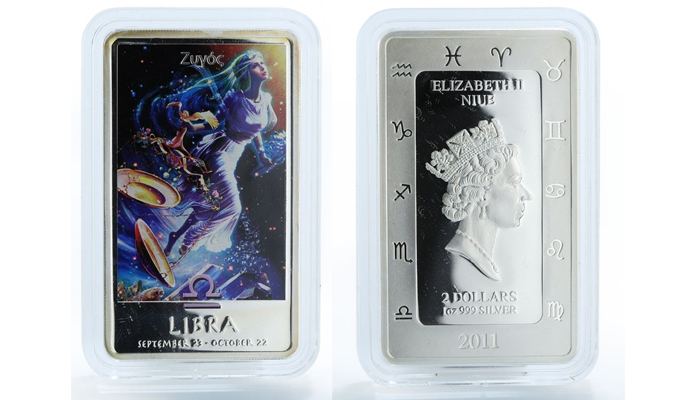 Coins of the Zodiac Signs series minted in Somaliland are made of steel. The collection has 12 coins in denominations of 10 shillings of Somaliland. One coin - one sign. The coinage of the face value falls on the reverse, the name of the financial institution is also described here. Year of release of the series - 2006.

The first line of coins from the Zodiac Signs series in Ukraine was issued at the beginning of the two thousandth. The end of production was in 2008. There are two types of collection: silver and gold. Silver coins "Zodiac Signs" with a face value of 2 hryvnias are issued with a circulation of 15,000 items. Gold, face value of 5 hryvnia, issued in a circulation of 10,000 pieces. Each coin depicts the zodiac symbol on the reverse side. The obverse is decorated with the image of the sun in four phases, the emblem of the country, the date of production and the name of the financial institution. Coins are the current payment unit.

Macedonian Zodiak Sings is a line of oval coins from Macedonia. Only 12 coins. Products are made of silver 925 with gilding. The drawing is applied by laser engraving. Coins are distinguished by a color image on the reverse. In addition to the symbol, a model of the constellation is applied according to the norms of astronomy.

Macedonian coins are a payment element, the face value of which is ten dinars. The obverse text is presented in Macedonian and English. The series was released in a circulation of 7,000 copies. A case is attached to the coins. 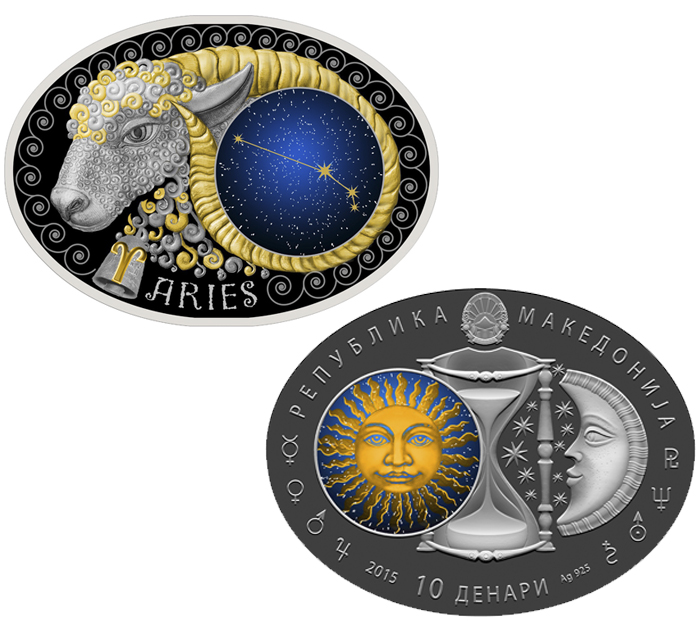 Coins "Zodiac Signs" in Russia and other countries of the world - this is an interesting investment solution. Over the years, the price has been rising. If the buyer is an avid numismatist, then such products can complement and decorate the collection.