How to install a cooker hood in the kitchen with your own hands: step by step instructions

Since ancient times, a man pays great attention to the ventilation of his home, realizing that his life and health depend on fresh air. Ancient people picked up caves for housing with natural ventilation, so that smoke from the fire freely left the room. All nomadic tribes arrange portable structures in the form of yurts, wigwams with a mandatory hole in the form of a window, which is located at the top of the hut. Modern living quarters are necessarily equipped with natural ventilation.

Harmful factors in the kitchen

The kitchen is the place to cook. In this room more than in any other, the accumulation of factors that have a detrimental effect on the health of its inhabitants is possible. These are combustion products. The harmful substances released during gas combustion carry elements of phosphorus, sulfur, and halogens. The toxicity may exceed the emission of natural gas.

Another dangerous factor in the kitchen should be called foods formed during cooking. Heat treatment of products using vegetable oils and fats is accompanied by the release of a large number of toxic elements. These are various acids, aldehydes, ammonia, aromatic substances, amines and many others. A large proportion of these poisons enter the respiratory tract and lungs of a person standing at the stove. Another part settles on furniture and serving the kitchen, which also adversely affects the health of the inhabitants.

It often happens that during cooking natural ventilation is not able to fully perform its functions. An extractor hood is a device designed for forced ventilation of a room in order to remove harmful substances from the atmosphere of a living room formed during the course of human life. In this regard, the topic becomes relevant - where to install the hood in the kitchen. 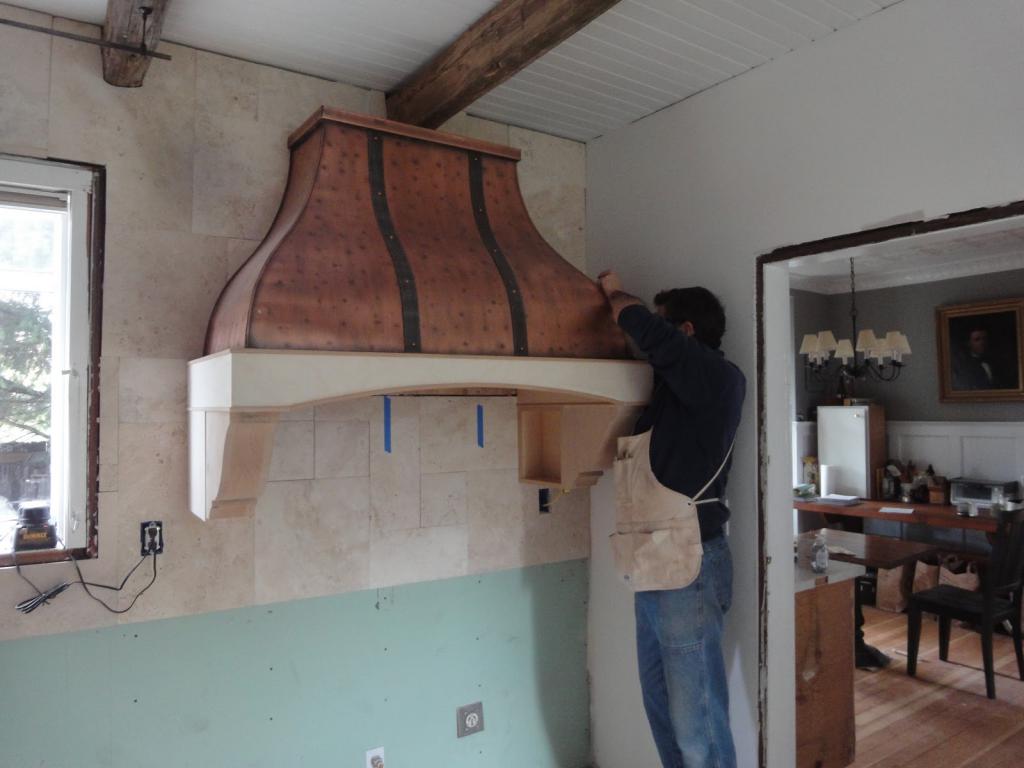 It is not possible to determine the exact list of varieties of exhaust devices. Over time, the appearance and internal components changed. But despite all the design changes, the purpose and principle of action remained the same. A wide range of diversity allows the selection of devices according to the needs of a particular kitchen and the needs of its users. This article will cover how to install a range hood.

How to choose the right hood

Every housewife wants to have a decent exhaust device in her kitchen that will satisfy all needs. For the right choice, you need to know what parameters exhaust systems have, which is worth paying attention to first of all.

This parameter determines how effectively the device will cope with the air volume of the kitchen in which it is installed. According to sanitary standards, within one hour, the total amount of air in the room should be changed 12 times. As an example, we calculate the exhaust hood throughput for a small kitchen, where the length is 3 meters, the width is 4 meters, and the ceiling height is 2.7 meters.

With these dimensions, the volume of the room will be: 3 × 4 × 2.7 = 32.4 m 3 , and multiply by 12. It turns out 388.8 m 3 . If you need to get more accurate numbers, you can calculate the amount of furniture and subtract from the total. If the kitchen has a lot of floor and wall cabinets, the volume will be significantly reduced.

When installing an exhaust device, you should also pay attention that many of its components are able to prevent the passage of air. So, for example, when installing a circulation hood, it is worth knowing that a coal element will reduce the productivity of the installation by about 1.5 times. And a grease filter made from sintepon will also reduce productivity. Especially if it is not the first freshness.

Some manufacturers equip their devices with cartridge replacement alarms. The simplest option is that a sign is applied to the filter element. As the filter becomes dirty, it either changes color or completely disappears. This suggests that it is time to change the item.

In modern expensive fixtures, control functions are given to electronics. It processes the average filter usage time during hood operation and gives the corresponding signals to the control panel: if the F sign blinks, then it is time to change the filter that absorbs fat deposits. If it is time to replace the charcoal filter, the C symbol flashes.

An exhaust device works, as a rule, throughout the entire cooking process. Therefore, such a factor as noise is not the last value. Prolonged exposure to noise adversely affects health and hearing. And just a head can hurt.

Modern hoods are equipped with electric motors specially made for these devices with special bearings and acoustic packages in the motor casing. To reduce noise, systems with two motors and fans are also used. At the same engine speed, the intake air flow doubles.

The noise level in such hoods is determined at 50 decibels, which on the noise level scale corresponds to the sound of a typewriter. Parameters are indicated by the manufacturer in the passport. When buying, pay attention to the manufacturer of the electric motor. To date, the motors manufactured in Germany and Italy are considered the best. The country of origin is usually indicated on the motor housing. It can also be indicated in the passport to the exhaust device.

The most simple devices are equipped with mechanical control. 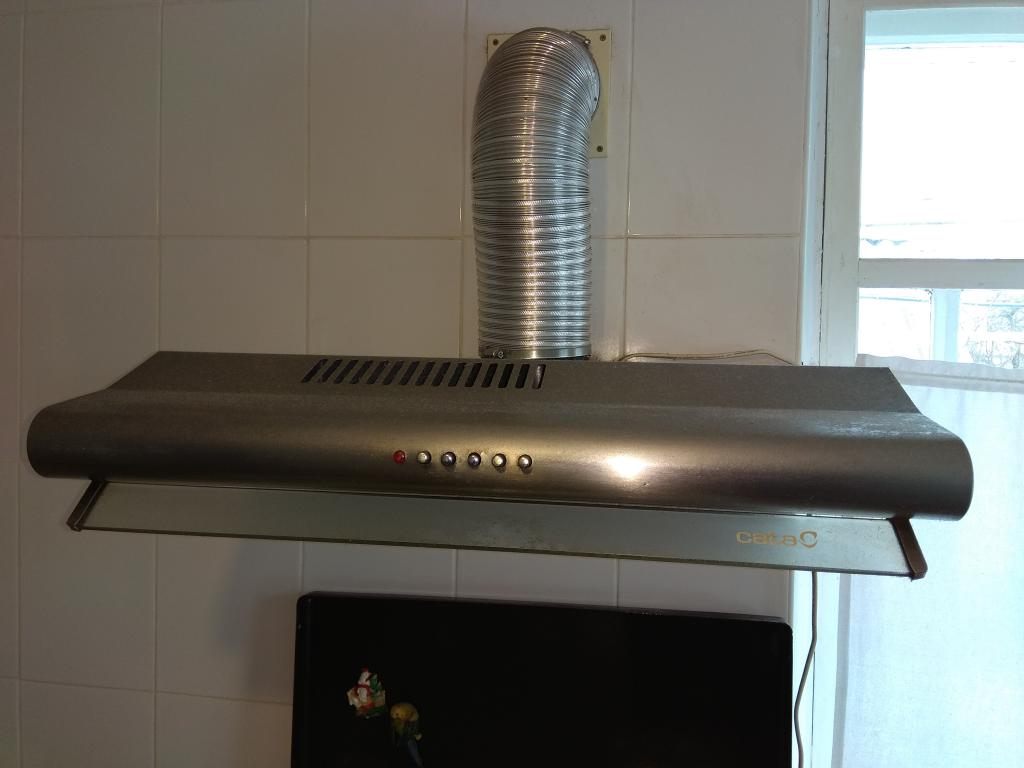 These are sliders and buttons located on the front panel. With their help, the installation is included in the work, the rotational speeds of the electric motor are switched, the backlight bulbs are turned on. More advanced devices are remotely controlled using the remote control. It is very convenient, you can control the device from a distance without taking direct part (for example, dirty hands). But the most expensive and functional are new developments on infrared sensors. 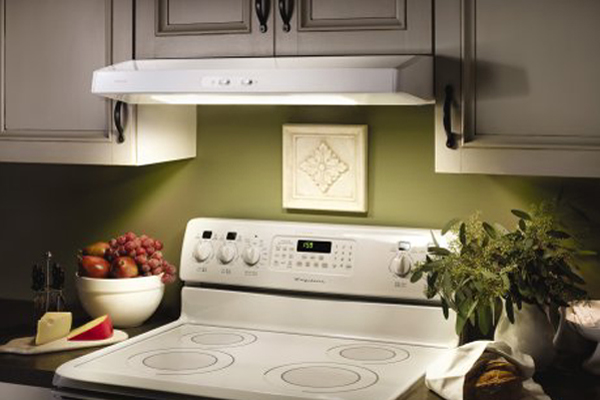 Such devices are fully automated. When you turn on the burner, the hood automatically turns on. An ultrasound sensor monitors the evaporation density between the stove and the surface of the fume hood. It increases productivity in case of burning on the stove. The price of such devices, respectively, is far from low.

Models of this type are located above the surface of the gas stove and are attached to the wall. Such devices do not provide for the removal of cleaning products into the ventilation system. In this case, the air is cleaned inside the device and released into the kitchen. In the case of such a hood is a fan of low power, several filter elements.

Among the advantages, it is worth highlighting the relatively low cost, a nice-looking design, caused by the lack of air ducts, ease of installation and connection. Along with good qualities, there are significant drawbacks - increased noise during operation of the device, low power of the intake air stream.

The biggest inconvenience is the need for frequent replacement of cartridges. The first-stage filter, which takes the filtration products first, will have to be changed after the first one and a half to two months of use.

When buying a flat hood, it is worth considering in advance the possibility and affordability of the purchase of replaceable filters in your region. It is possible that their price will be far from small. On how to install the hood above the stove, let us dwell below.

Given that the flat hood does not have channels and pipes for connecting to the ventilation duct, the choice of location depends on the wishes of the owners. To determine at what distance from the stove to install the hood, you need to be guided by fire safety measures. According to the rules, the norm for electric stoves is a distance of 65 cm, and for gas stoves - from 75 cm to 80 cm. If the height is too high, then perhaps the electric motor will not be able to give out a sufficient suction flow, and not all harmful substances will be removed.

In the back wall of the device there are holes for fixing. Using a tape measure and horizontal level, mark the points on the bearing surface, drill holes with a puncher and fasten the hood using nylon dowels and screws. A good fit for this and anchors. These are very reliable fasteners. Thus, we examined how to install the hood.

Another type of hood for the kitchen with a tap into the ventilation are built-in devices. The name itself suggests that such species are built into the elements of kitchen furniture. Due to the fact that only a small part of it is available to the review, it is possible not to attach special importance to the whole appearance, but only to its visible part. 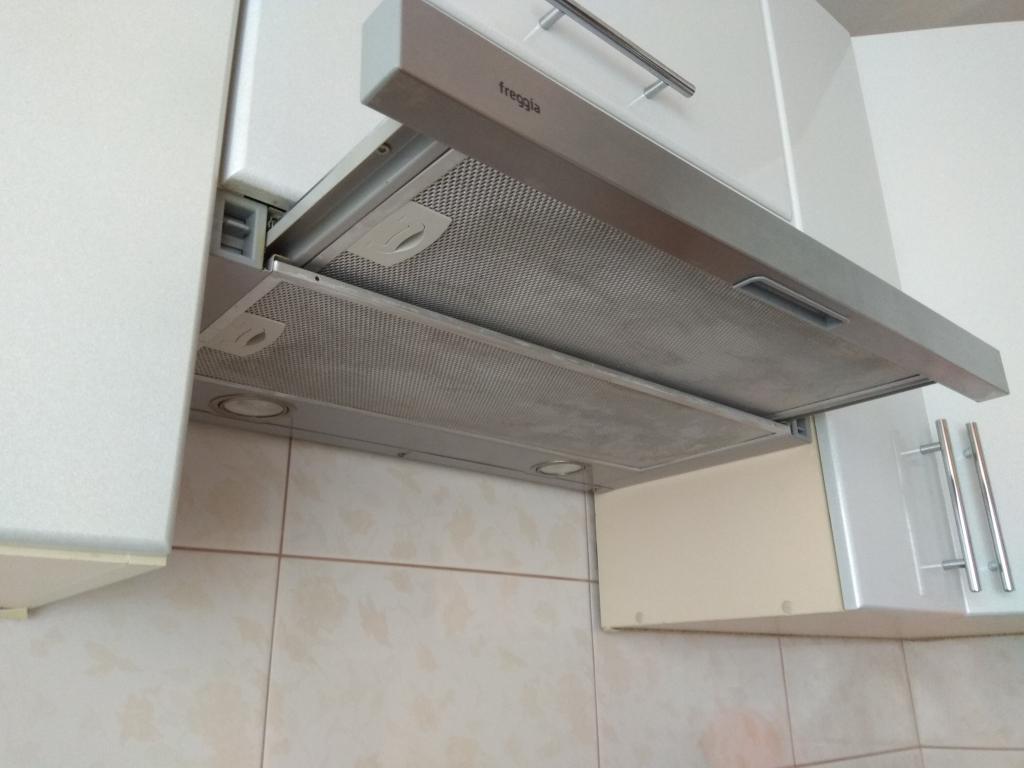 As a good example, you can bring a telescopic hood. It folds like a telescope. As a rule, it is equipped with a three-speed electric motor, which turns on when moving to the operating position, i.e. the sliding part is advanced. When folded, it takes up less space. As necessary, the depth of the exhaust part and the rotation speed of the motor, on which the power of the intake stream depends, are regulated.

Briefly dwell on how to install the built-in hood. When ordering furniture for the kitchen, you need to have the dimensions of an exhaust device that will be used. An exhaust device is fixed in the prepared opening using the elements supplied in the kit. These are corners for fastening and self-tapping screws. To connect the air channel, you can use the corrugation. 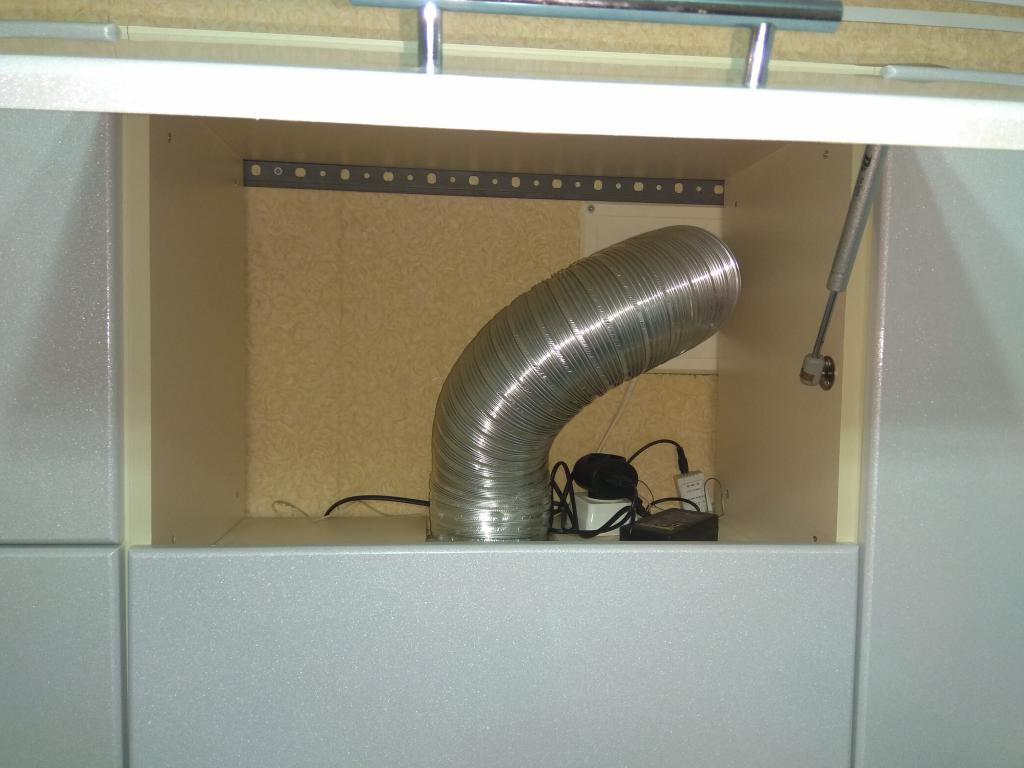 Such an element is very light, with its help you can figure out how to install the hood if the pipes interfere. The corrugation easily bends and interfering pipes can simply be circumvented. If conditions allow, then you can use ducts for ventilation of round or rectangular cross-section. Connect the cord with the plug to a previously prepared power source (outlet).

Another option is a hood hood. How to install it? Judging by the name, the dome shape is immediately presented. It has a pretty beautiful design. Many hoods of this type can be attached to the ceiling due to the long vertical duct. Most of them have a multi-speed electric motor. This is very convenient when choosing an operating mode. With high smoke levels, the maximum revolutions of the motor are activated, and the flow of intake air increases significantly. 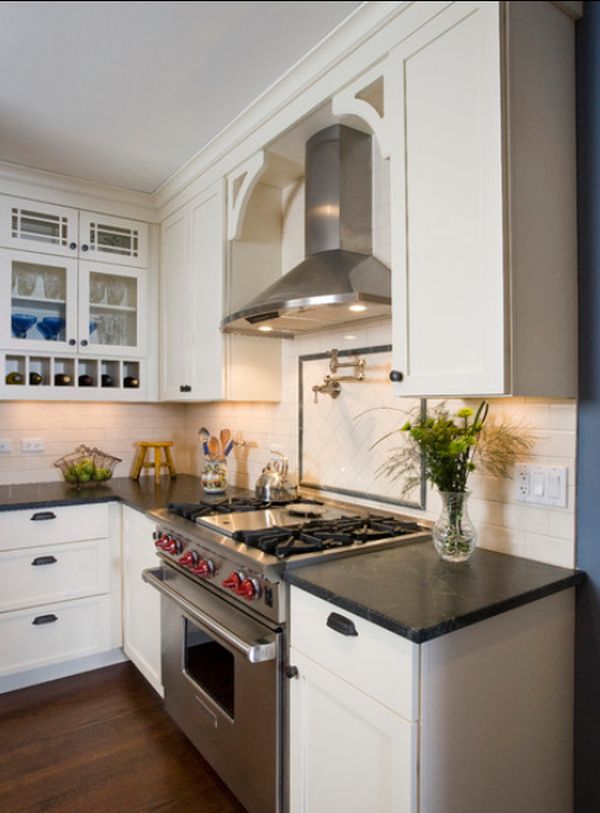 They can be equipped with remote control, but such a model is more expensive. Mounting to the ceiling with a rigid box or on the wall is allowed. It is possible to use a corrugated duct. Given the high drive power, installation for long ducts is allowed. It is attached to the wall through openings on the back wall (following the example of a flat hood).

A good example of exhaust hoods for a kitchen with a tap into the ventilation are angular exhaust devices. There may be a situation where the only suitable installation location is the corner of the kitchen. For this case, an angle hood is useful. As an example of how to install a hood in the kitchen with your own hands (angular type), you can take the installation of a domed and a flat hood.

The only difference is that in this case the device will be attached to two load-bearing walls instead of one. To connect the duct, both corrugated pipe and round and rectangular ducts are applicable. A pre-installed power outlet is required to connect to the mains.

This type of exhaust device is characterized by the simultaneous presence of filter elements for a non-channel cleaning method and the ability to divert the air flow into the general ventilation system. 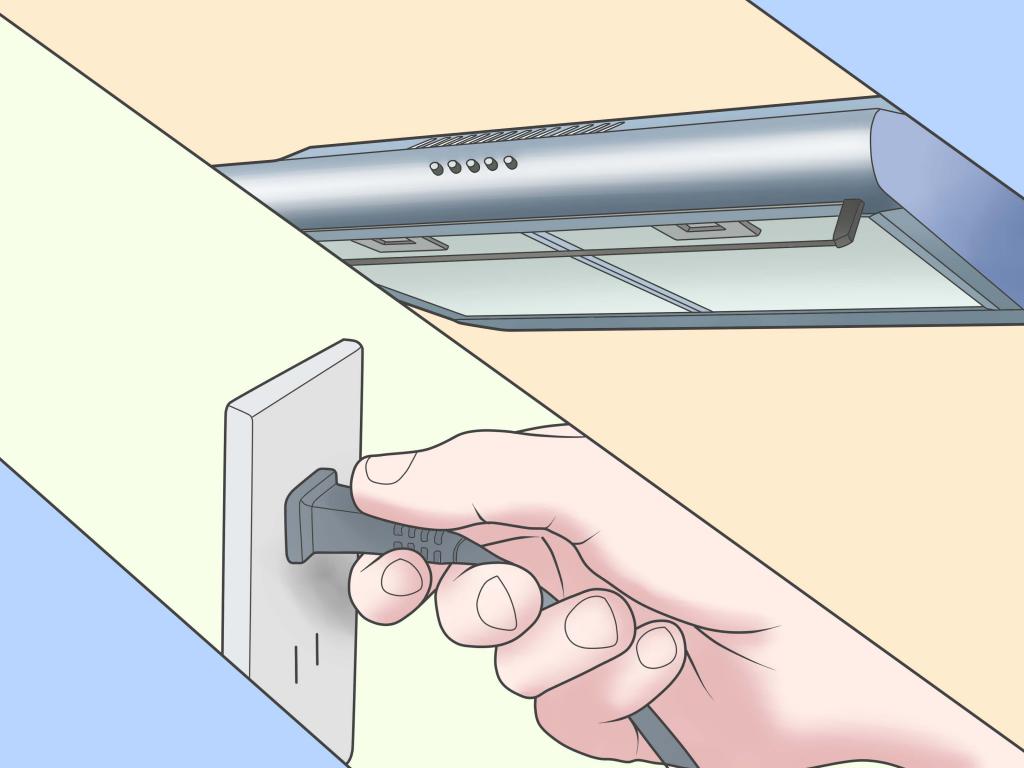