Alopecia areata is a disease in which rounded foci of baldness form on the head. Pathology is found not only in men, but also in women, and even in children. This type of hair loss is also called focal alopecia. This is one of the most complex and difficult to treat forms of baldness. A person does not feel any discomfort during hair loss. Only when combing on the head a bald spot of a round shape is found. The affected areas are similar to nests, hence the name of the disease.

Causes of the disease

The causes of alopecia areata are not exactly established. It is assumed that the pathology is of an autoimmune nature. The human body begins to perceive the hair follicles as a foreign substance, and rejects them. First, a small round area of ​​baldness appears on the head, which then increases.

The following factors can provoke the development of the disease: 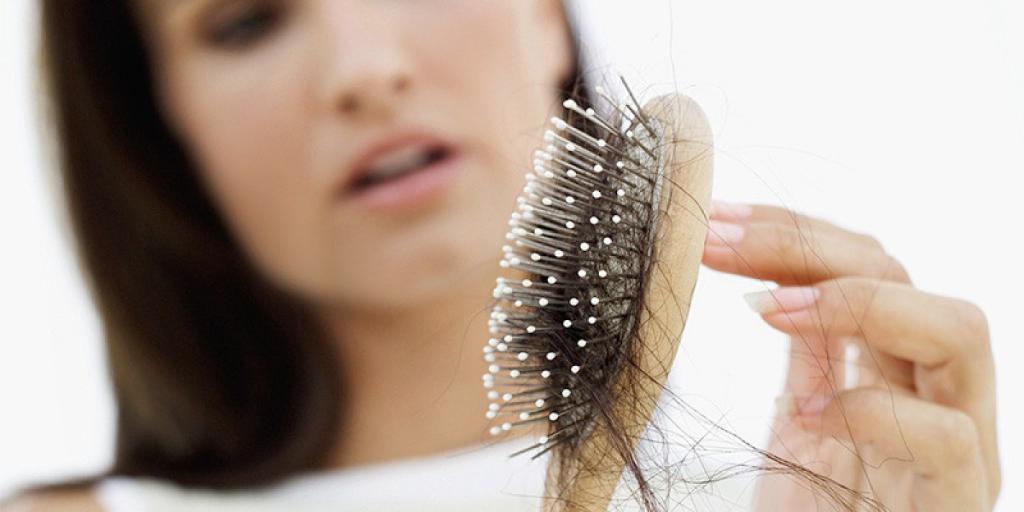 The hereditary factor plays the main role in the occurrence of the disease, which is why the disease is difficult to cure. All other causes of baldness can be eliminated.

Alopecia areata occurs in several forms. In medicine, the following varieties of this disease are distinguished:

Different forms of baldness can pass one into another. If at the beginning of the disease local alopecia is noted, then in the future, if untreated, a subtotal and total variety of the disease may develop. As a result, a person loses more and more hair.

Stages of the disease

In its development, alopecia areata passes through several stages:

The first sign of the disease is the appearance of areas of baldness. They usually have a round shape and a size of 1 cm to 10 cm. The lesion focus has clear boundaries. Usually a single site of alopecia is noted, but in some cases there may be several. Zones of baldness can merge with each other.

The skin in the affected areas is slightly changed. Sometimes slight redness is noted. Crusts and peeling are not observed. Hair near the alopecia zone does not hold well in the follicles and is easily pulled out.

Increased fragility of hair is noted. They have a normal root, but a very thin stem base. Often hair breaks at a length of about 3 mm.

There is a special kind of disease (ofiasis) in which bald spots are not round, but longitudinal in the form of a strip. Nails can also be involved in the pathological process, their condition significantly worsens. Such types of alopecia are considered the most malignant and poorly respond to therapy.

Alopecia areata in women usually occurs between the ages of 15 and 35 years. More often this disease affects patients with dark hair. Pathology usually proceeds more favorably than in men. Estrogens predominate in the body of a woman, this prevents severe hair loss. However, if the patient has hormonal disruptions, then baldness can be significant. Due to alopecia, women often experience stress and depression, which in turn enhances hair loss. 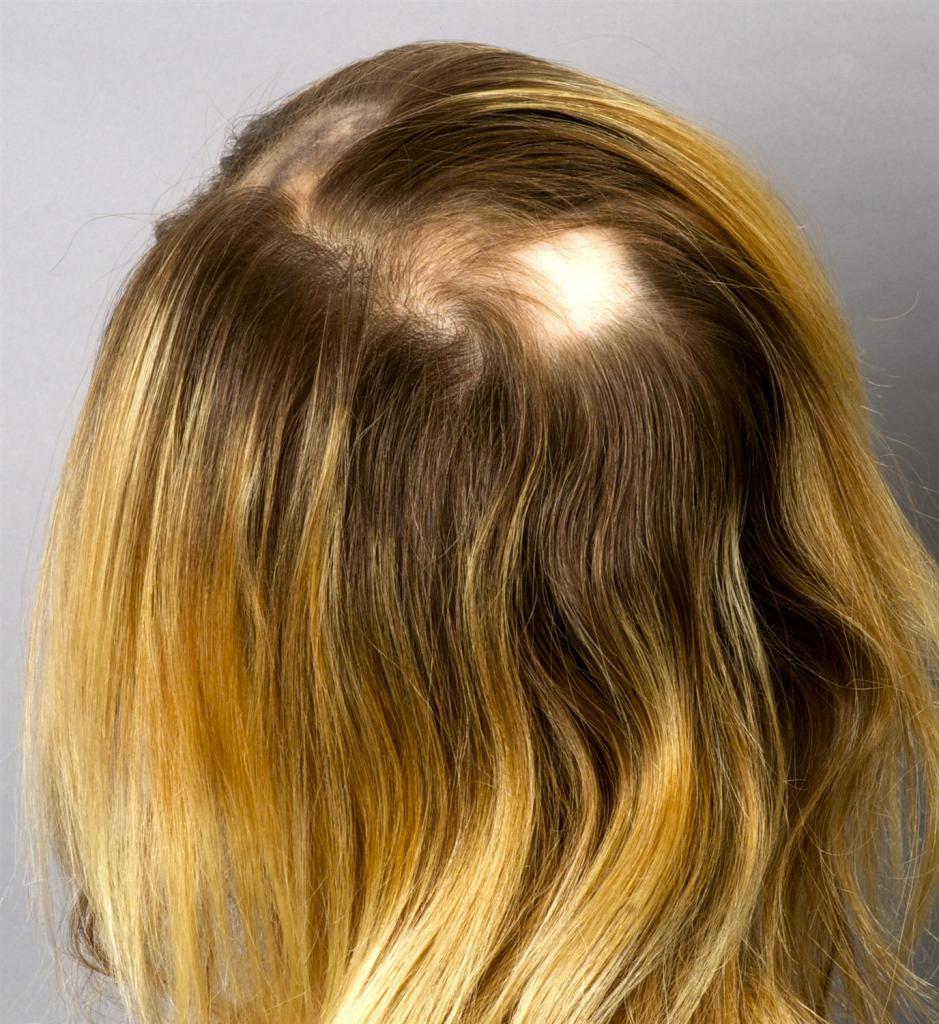 Alopecia areata in men begins most often with the crown. In the upper part of the head, a lesion is formed. If no action is taken, the area of ​​hair loss grows over time. In advanced cases, the patient completely loses hair.

Features of baldness in children

Alopecia areata in children is a fairly rare occurrence. Very often skin ailments join the disease: atopic dermatitis, allergic rashes, vitiligo. With alopecia, the child often loses not only the hair on his head, but also the eyebrows with eyelashes. 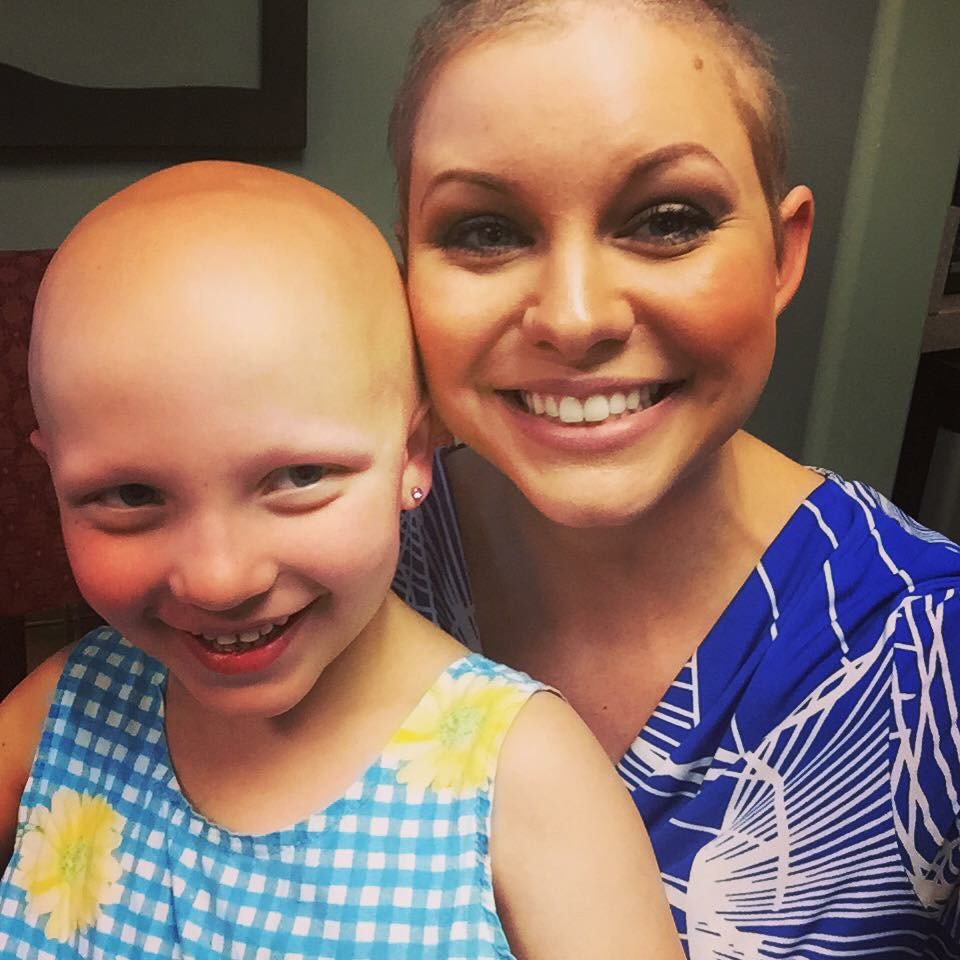 Most often, this disease affects children older than 3 years. A bad prognostic sign is the attachment of atopic dermatitis, nail damage and the onset of the disease at an early age. In these cases, the pathology is cured with great difficulty. However, malignant forms of the disease are rarely seen in children. In most cases, hair can be completely restored.

When the first signs of alopecia appear, you should consult a trichologist. Typically, an external examination of the patient is sufficient for diagnosis. In some cases, additional laboratory tests are necessary:

Sometimes alopecia is a manifestation of vitamin deficiency, as well as endocrine and infectious diseases. In order to identify such pathologies, serological studies, a blood test for biochemistry and hormones are prescribed.

If there is a small area of ​​baldness on the head (not more than 3 cm), then dynamic observation is necessary for 3 months. If during this time the site is not covered with cannon hair, then a course of treatment for alopecia areata is required.

Locally prescribed corticosteroid ointments and creams: "Celestoderm", "Dermoveyt", "Clobetasol", "Fluorocort". They are applied to areas of baldness. Also used are the corticosteroid drug Diprospan in the form of a solution. It is administered subcutaneously in the affected areas. This treatment helps with hair loss of not more than 50%. 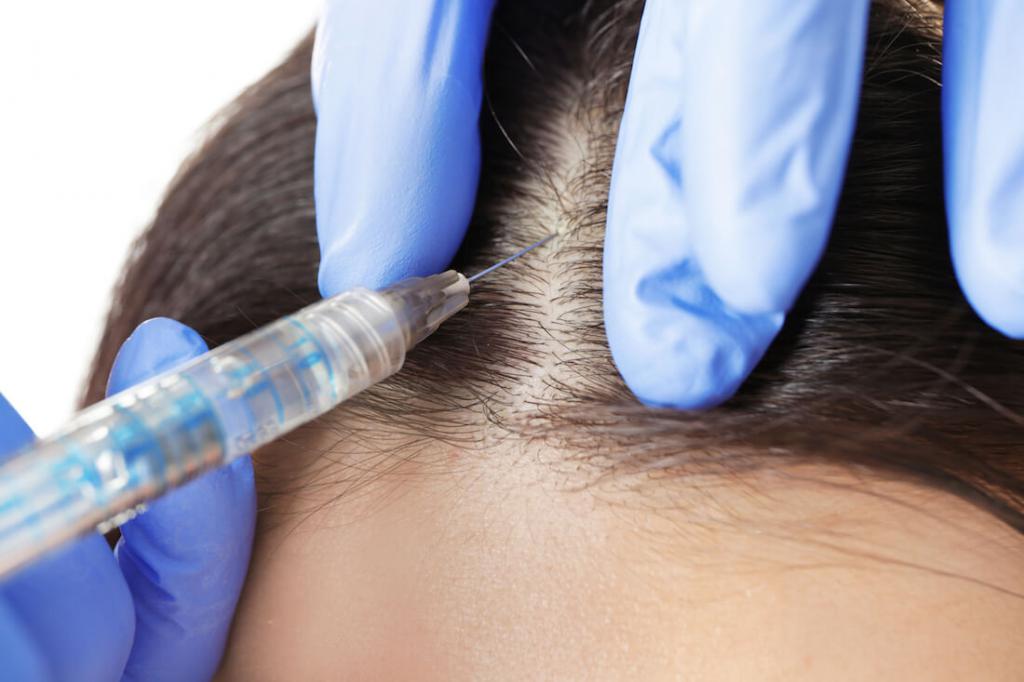 In the treatment of alopecia areata in women, the drug "Cimetidine" gives good results. It has an antiandrogenic effect and normalizes the hormonal background in the patient’s body. It is released in the form of tablets, capsules and a solution for injections. Men should not take this medicine, since it can adversely affect the production of androgens.

In the treatment of alopecia areata in men, the drug Finasteride is used. It prevents the accumulation of the hormone dihydrotestosterone in the bulb area and prevents hair loss. This tool is not recommended for children and pregnant women. A medicine can cause genetic abnormalities in the fetus. 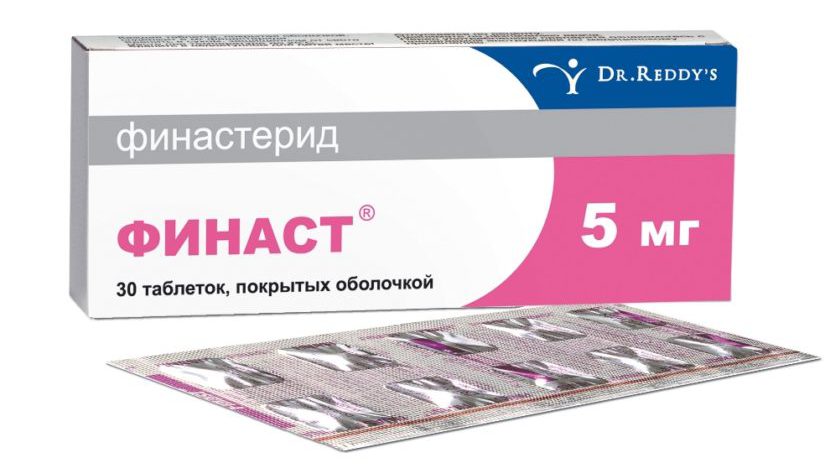 In the treatment of male and female patients, Ditranol ointment is used. It has a locally irritating effect. At the site of the drug, a slight reddening of the skin occurs. Immune cells are activated to fight inflammation and distracted from the hair follicles. The drug Antralin, tincture of red pepper, lemongrass, burdock oil also have irritating properties. Such funds can be used in the stationary stage of the disease when hair loss has stopped.

A good result is given by the drug "Minoxidil". This is a solution that is rubbed into the skin in areas of baldness. It stimulates hair growth. 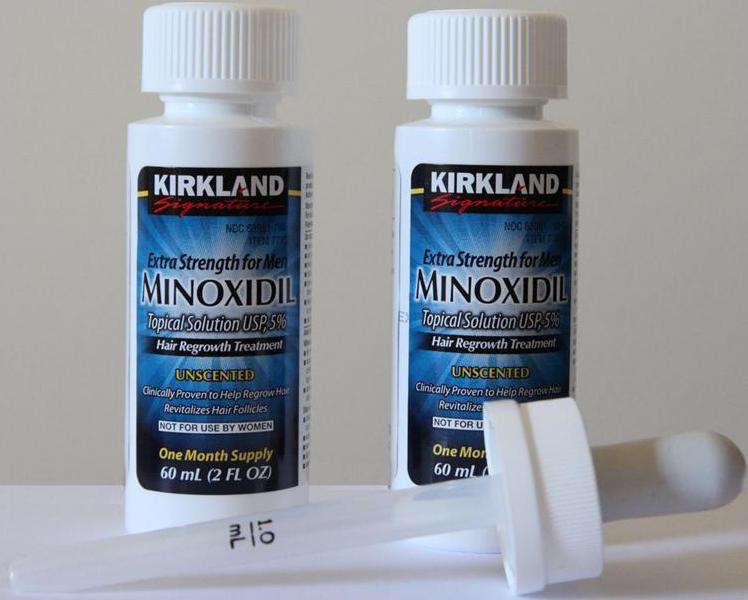 In addition to local drugs, prescribe medications for oral administration:

In severe cases, immunosuppressants are used: Cyclosporin A, Timopentin, Groprinosin. They are able to affect the autoimmune nature of the disease. You can take such potent drugs only on prescription. These drugs have many side effects.

Physiotherapy complements the medical treatment of baldness. To improve the condition of the hair, the following procedures are prescribed:

To achieve the result, 10 to 15 physiotherapy procedures are needed.

In advanced cases of the disease, conservative treatment does not help. Have to resort to a hair transplant. However, not all experts consider this treatment method effective. Transplanted hair may not take root if the body has a pathology that provoked baldness.

Before a hair transplant, it is necessary to accurately identify and eliminate the cause of alopecia. Only in this case, a new hairline can take root.

The prognosis of the disease largely depends on the cause of alopecia. If you can identify and eliminate the factor that triggered baldness, you can completely get rid of hair loss. With the genetic form of alopecia, the prognosis becomes more serious. Achieving complete hair restoration is far from always possible.

You can find many positive reviews about the treatment of alopecia areata by darsonvalization. Patients stopped hair loss after 7-10 procedures. After some time, a new hairline appeared in the bald areas. This method helped many women with postpartum alopecia associated with hormonal imbalance.

There are also reports of the good efficacy of Minoxidil. It helps even with severe forms of alopecia areata. In the reviews, it is reported that after the course of treatment, patients began to gradually overgrow areas of baldness, both on the head and on the body. This tool was effective even with a loss of hair more than 60%. 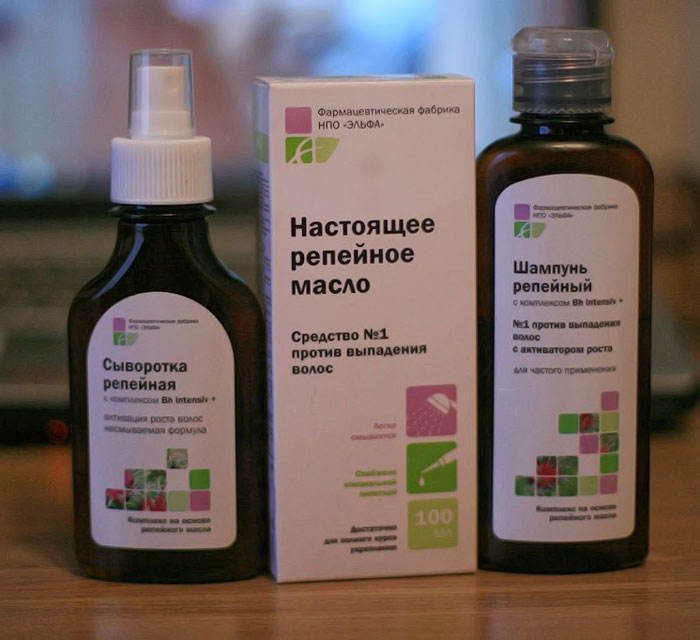 If a person has a tendency to hair loss, then it is necessary to take measures to strengthen them. To do this, regularly wash your hair with special shampoos with vitamin supplements, as well as use herbal rinses for rinsing and medical masks. You should not wear tight hairstyles and pull your hair tight. It is necessary to resort to staining as little as possible.

It is also important to eat right and avoid stress whenever possible. At the first sign of increased hair loss, you need to visit a trichologist. This will help prevent the development of alopecia.