From reviews of Goethe's Faust, you can make sure that disputes about this work have not subsided so far. This philosophical drama was completed by the author in 1831, he worked on it for 60 years of his life. This work is considered one of the peaks of German poetry due to the whimsical rhythms and complex melody. 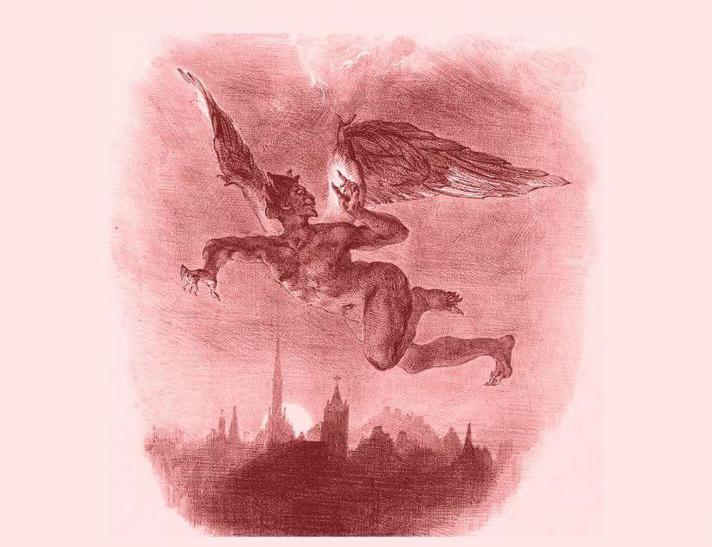 In the reviews of Faust, Goethe always notes how long the author worked on this work. He wrote the first part as early as the 1790s, although the idea came to him a decade and a half before. The poet managed to complete it only in 1806.

Two years later, it was published, but then readers still could not imagine how this philosophical drama would end, where the poetic genius and Goethe's fantasy lead. He worked on the second part already in rather advanced years, and for the first time it was printed only after his death. The whole book was published in 1832.

Researchers discovered an amazing find in 1886. In the poet’s drafts, they found “Prafausta,” that is, the work that preceded the tragedy, it was possible to trace the very first ideas from which the author originally repelled. 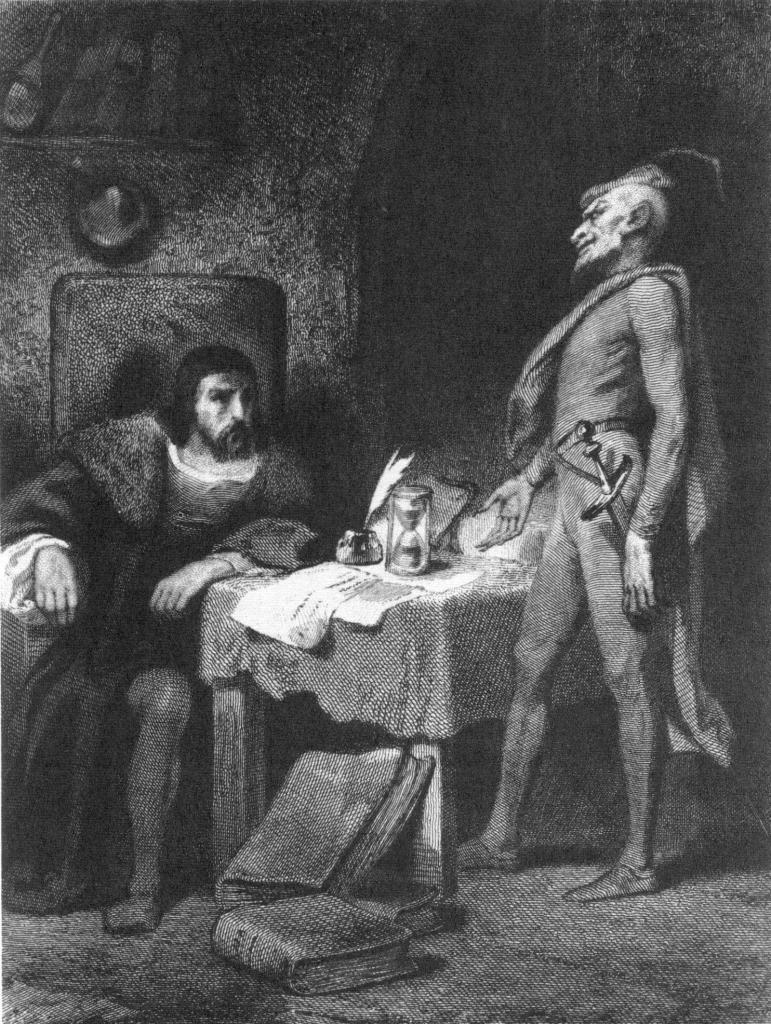 The Goethe's Faust will allow you to refresh the memory of the main events of this work, to recall how events developed in it.

It all starts with a prologue. It contains an episode that is not related to the main plot. The poet and the director of the theater argue with each other how to write the play. In the course of this dispute, the director claims that the viewer often comes across stupid and rude, besides not having his own opinion, but judging works from other people's words. Moreover, he is not always interested in art itself. Some come to the theater to look at others and "walk" their next dress.

In this regard, according to the director, there is no point in trying to create a great work, because the vast majority of viewers simply will not appreciate it. Instead, you can pile everything that comes to hand, surprising the viewer with a lack of communication in the presentation, because no one will appreciate the abundance of thought. 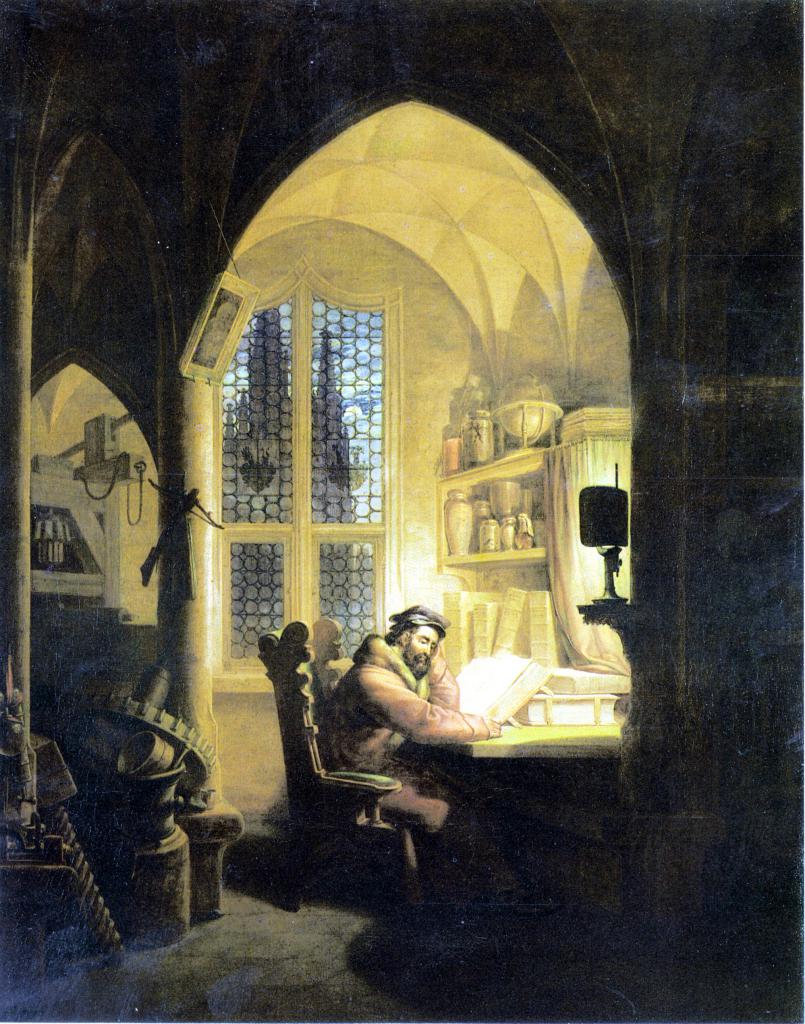 In this article we will give a summary of Goethe's Faust by chapters, so that you have the opportunity to consistently follow all the ups and downs of the plot.

The events of the first part begin in heaven. Mephistopheles argues with the Lord about whether Faust will be able to save his soul from him. After that, the reader is transported to the ground, where he meets a professor, the main character of the work. Speaking briefly about Goethe’s Faust chapters, it should be noted that he was a researcher who, with his findings and discoveries, brought many benefits to the local inhabitants, but he himself was never satisfied with the knowledge he had learned from books for many years. Realizing that the innermost secrets of the universe, about which he dreams, are inaccessible to the simple human mind, he wants to commit suicide by drinking poison. Suddenly heard evangelism saves him from suicide. 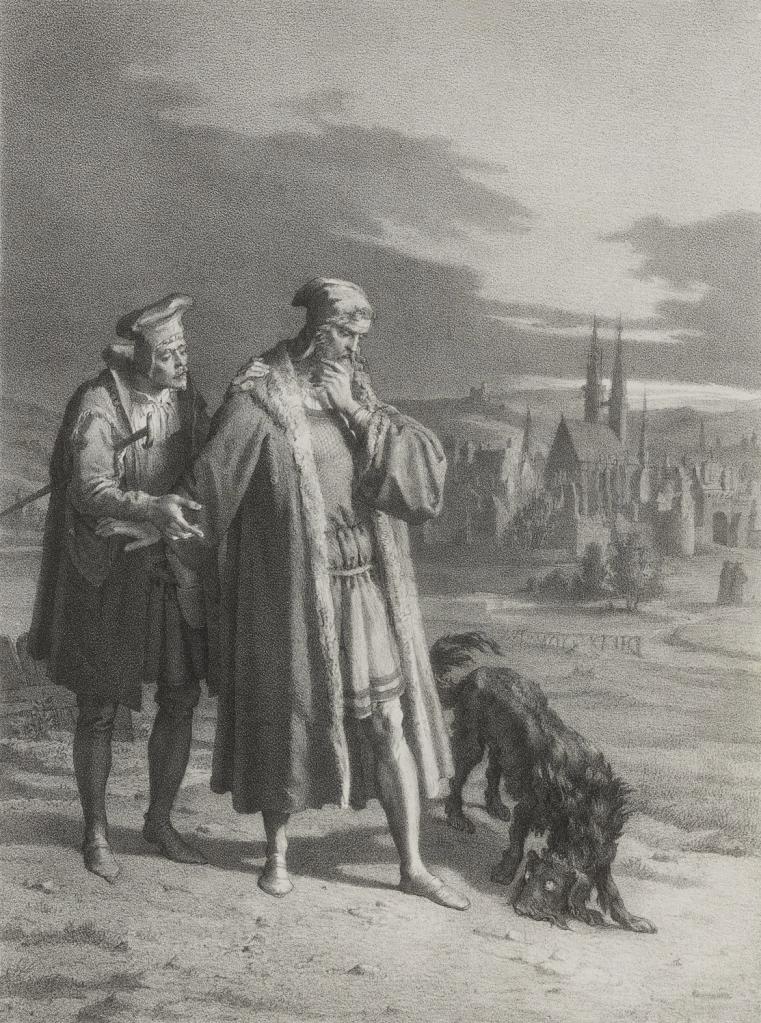 The main character goes for a walk around the city with his student Wagner. They meet a dog, which they bring in a house. There she takes the image of Mephistopheles. The evil spirit tempts the hermit scientist, convincing him to again experience the joys of life, which he has long been bored with. But for this he wants a rather high fee - his soul.

Faust agrees, they fasten this treaty with blood.

Telling the contents of Goethe's Faust by chapters, we should then stop on the stage in which Mephistopheles and Faust go for a walk around Leipzig, wanting to have fun. In the wine cellar, an evil spirit amazes students by extracting wine from a hole in a table. 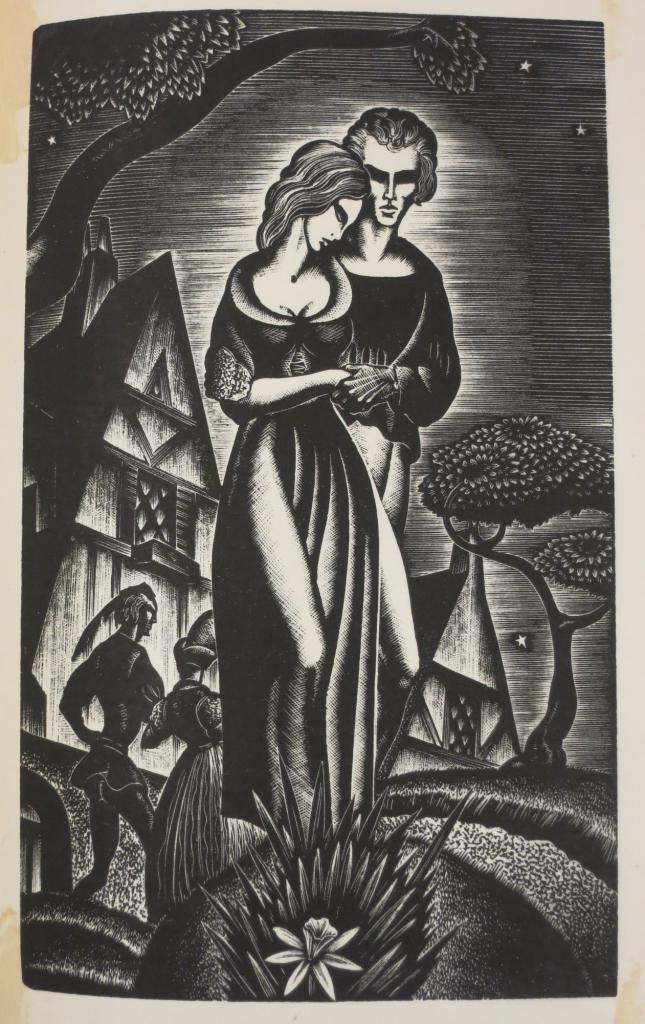 Then he begins to indulge Faust’s desire to become close to a young and innocent girl named Margarita, considering this an exclusively carnal attraction. To fine-tune their acquaintance, Mephistopheles enters into confidence in her neighbor Martha. When a relationship is struck between the characters, Faust cannot wait to spend the night with a new lover. Therefore, he convinces the girl to give her mother sleeping pills, but the woman dies from the drug that the scientist passes to her.

Returning from Faust, Margarita soon discovers that she is pregnant, after which her brother Valentine calls the scientist to a duel.

If you read Goethe's Faust in full, you should have evaluated the episode associated with the murder committed by the protagonist. During the fight, he kills Valentine, after which he immediately leaves the city. Faust even forgets about Margarita, until she meets her ghost on the witch's Sabbath. He appears to him on Walpurgis Night in the form of a terrible prophetic vision. This is a girl with pads on her legs and a red thin line on her neck. Asking an evil spirit, he finds out from him that his beloved is now in prison awaiting the death penalty. She got there for drowning their daughter.

Faust wants to help Margarita. She sits in a dungeon, gradually losing her mind. He invites her to escape, but Margarita refuses to accept the help of the evil spirits, preferring to remain awaiting execution. To Mephistopheles surprise, the Lord decides to save the girl’s soul from torment in hell. 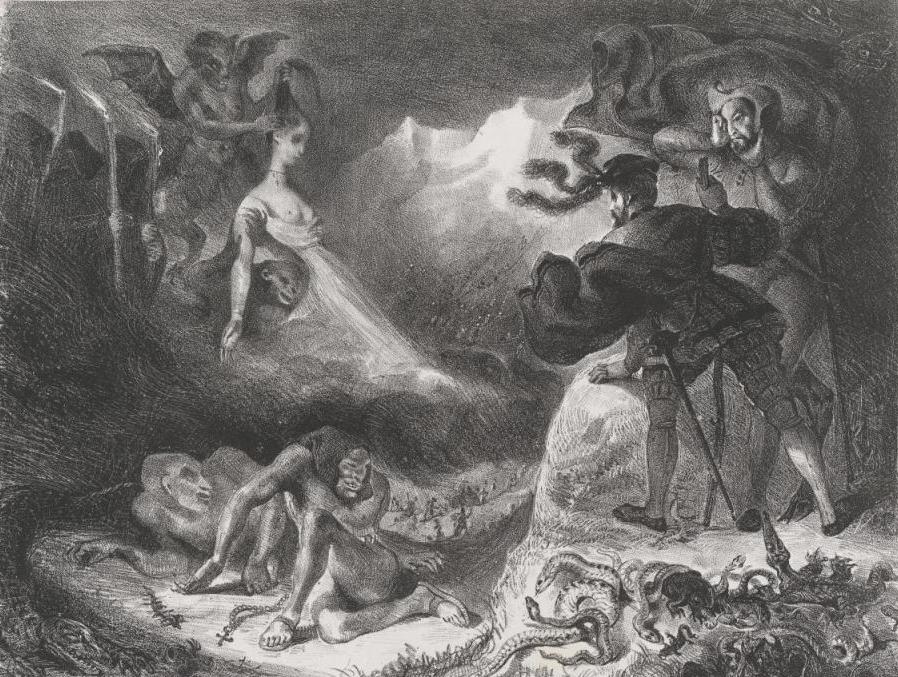 The second part of this work, as you recall, was written much later. It is a philosophical and poetic canvas, which is full of mystical associations, symbols and unexplained riddles. The work is considered one of the most encrypted in the world literature.

This part consists of five acts, in each of which there is a more or less independent plot. In the first act, the action takes place in antiquity. Faust marries Elena the Beautiful. Then, together with Mephistopheles, he meets the emperor, taking a series of measures aimed at improving the well-being of his subjects.

In the second part of the event moved to the world of the Middle Ages. Moreover, to understand the text and all the lyrical digressions and references requires a good knowledge of ancient Greek mythology. Because of these difficulties, the continuation of the tragedy is rarely staged in the theater and is not part of the school curriculum in Germany itself.

At the end of life

At the end of this work, we see the blind Faust, who decides to try to build a dam for the benefit of all mankind. He hears the sound of shovels working, and decides that his work has benefited people. This moment turned into one of the brightest in his life.

In fact, it is the nocturnal spirits of the lemur at the order of Mephistopheles who dig his grave, and the dam will never be built. Remembering the contract concluded with an evil spirit, Faust asks precisely at that moment to stop his life.

Under the terms of the agreement they signed, the soul of a scientist should be in hell. In this case, the bet that God made with Mephistopheles, dedicated to whether Faust can be saved, the Lord permits in favor of saving the explorer's soul. He explains this by the fact that he worked until the last moments of his life for the benefit of mankind.

As a result, unlike the traditional versions of this legend, in which Faust is in hell, in the Goethe version, angels take the scientist’s soul to paradise. This happens even despite the fulfillment of all the conditions of the agreement, as well as the fact that Mephistopheles acted with God's permission. 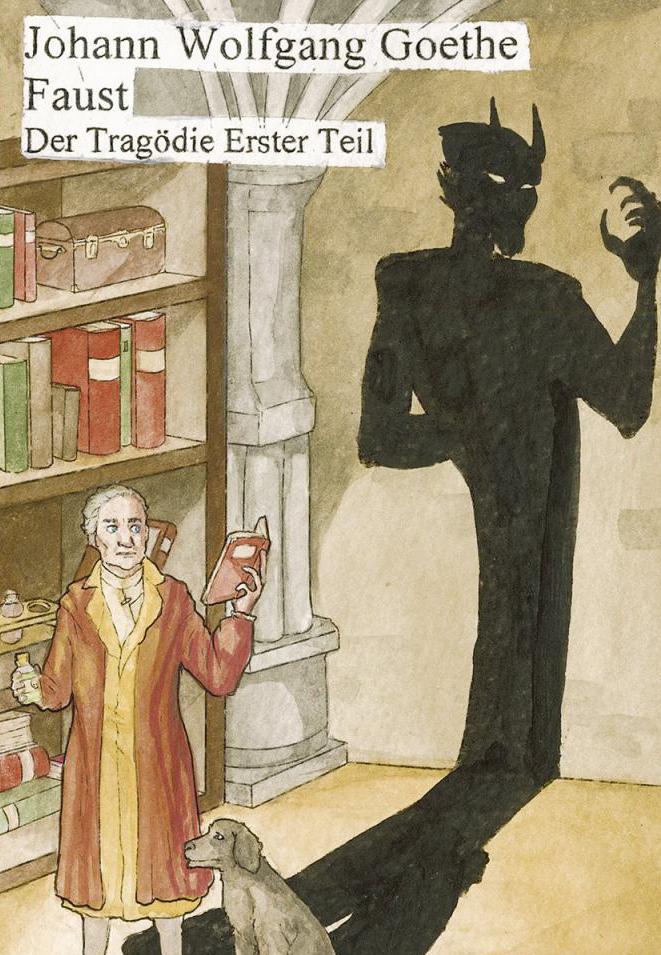 In the reviews of Goethe’s Faust, many say that this is a real textbook of life, which sets out the whole gamut of human vices. A special fortune accompanies those who become the owners of an illustrated version of this work. In their reviews of Goethe's Faust, they emphasize that the classic drawings that accompany the tragedy merge with the text, helping to better understand what the author wanted to say.