Each country has its own traditions in holding wedding ceremonies, and Germany is no exception. The Germans hold sacred customs and observances, but statistics show us every year that the number of marriages is declining. On average, 400,000 marriages were recorded annually in the country, and fifty years ago, statistics showed figures several times larger. As for age, the average for women is 31 years old, for men - 33. It can be concluded that grooms with brides are getting older. It remains to figure out how the weddings are held in Germany.

Of course, a marriage proposal should traditionally come from a man, however, some modern women have assumed this responsibility and come up with a little traditional trick. A woman can make an offer to her man on February 29, and he has no right to refuse. Although such an opportunity arises only once every four years, you can thoroughly prepare. But if the guy is still not ready for the wedding, he will have to pay off with a good gift. 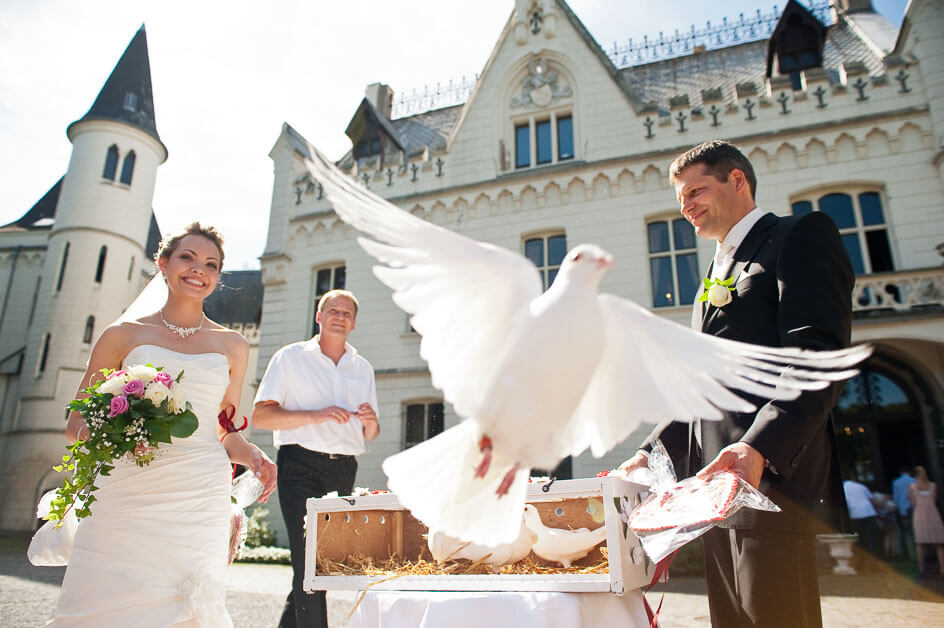 One of the most popular traditions is called Polterabend. This is such a kind of party, which is held in the bride's house. Many people compare the event with a bachelorette party or a bachelor party, but this is not entirely true. Guests are not invited to Polterabend, because everyone who knows about this party and considers it necessary to come, comes just like that. The Germans call this day the rehearsal of the gala dinner, and the bride’s parents prepare it in buffet style. One of the features of the holiday is that any guest can contribute and bring some pastries, snacks or alcohol to the table. In general, the name Polterabend was formed from the word poltern, which means "make noise", "rumble". Here lies the main highlight of the holiday: guests should bring vases, dishes, pots, and in general everything that can easily be broken in front of the windows of the house. The noise of breaking dishes, according to legend, should disperse all evil and unkind spirits. But the bride and groom should not forget that it is on their shoulders that the obligation to remove the fragments rests in order to prove their unity, and the more fragments, the better. After all, dishes are beaten for good luck, and such a tradition before a German wedding in Germany is very uplifting. 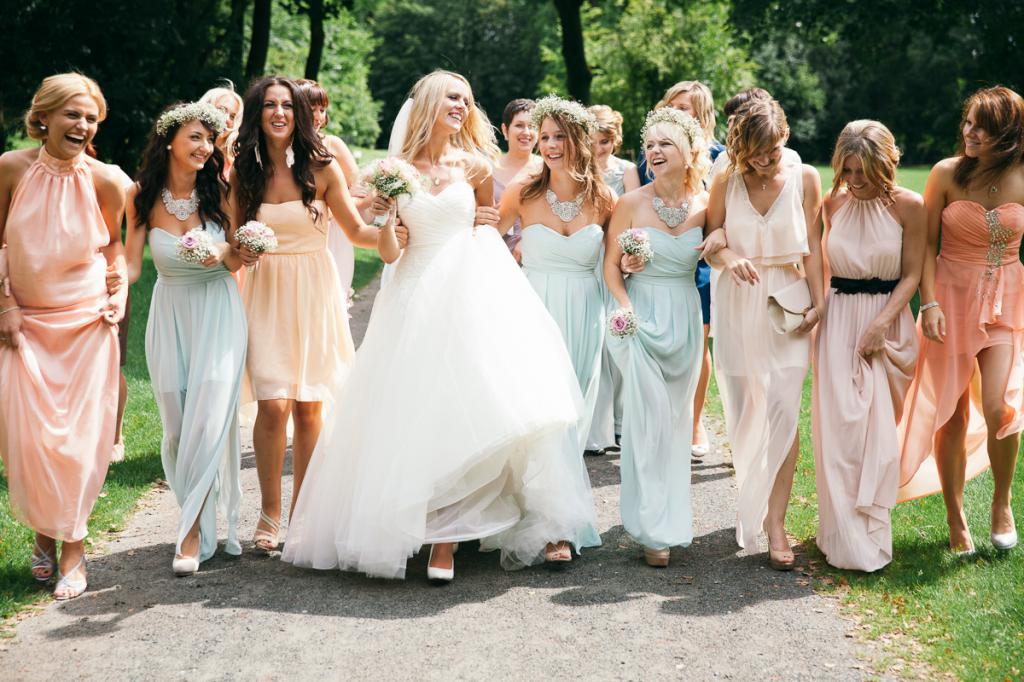 Such a tradition exists in every country in the world, in Germany it is called Der Junggesellenlenabschied. However, although the event is traditional in many countries, the Germans still have their own traditions. For example, in some cities of North Rhine-Westphalia, it is customary to burn the groom’s trousers as a farewell to a bachelor’s life.

The ancient German tradition, according to which the bride’s parents, from her very childhood, set aside one cent (previously it was pfennig - the minimum monetary unit), has survived to this day. But this money is deposited for a reason, according to tradition, the bride must buy a pair of wedding shoes for the collected coins. This will mean that the future wife will be not only an excellent hostess, but also a faithful companion of life. And on the wedding day, you should put one cent in the bride’s shoe. If you believe the traditions, this will ensure a comfortable life for the family. Following this custom allows you to honor the history of a wedding in Germany. 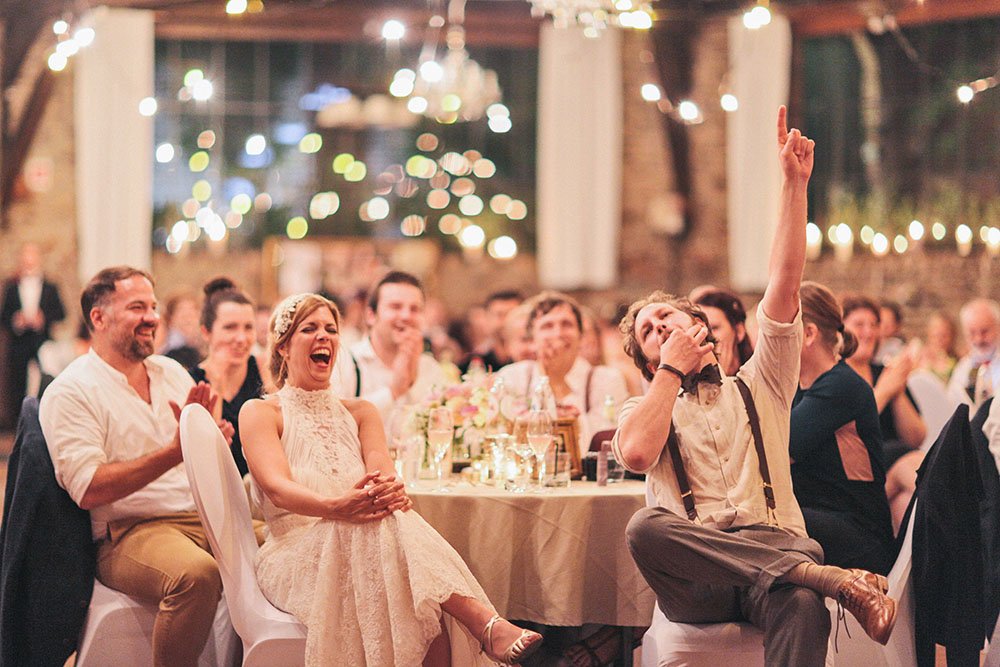 What should friends do before the wedding?

Relatives and friends, in addition to helping prepare for the celebration, create a wedding newspaper with their own hands. In it, they should describe the first acquaintance of the newlyweds, the story of their love, favorite activities. The newspaper itself consists of funny collages and funny photos of the groom and the bride and their family and friends. You can also interview the newlyweds and paint funny stories about love and family. The newspaper is presented to guests at the evening dinner as a good souvenir, which allows those present to learn more about the bride and groom. Wedding traditions in Germany are very entertaining.

The beginning of the wedding

Like any wedding, German also begins with a civil ceremony in the registry office. The religious wedding ceremony in the church is equated to it. Not all guests are invited to it, but only the closest relatives and friends, and the ceremony should take place before noon. All because traditionally this time is considered the most favorable for such a solemn event. According to customs, it is the first rays of the sun that contribute to happiness in marriage. And earlier, if for some reason it was not possible to hold the wedding at the right time, the clock in the church was set back.

In Germany, it is customary for the groom to take the bride out of the house, preferably on a horse-drawn carriage. And the bride on the way to church should in no case look back, such an omen means that a second marriage will be inevitable. The Germans called this custom Die Hochzeit. Yezidi weddings are often found in Germany. 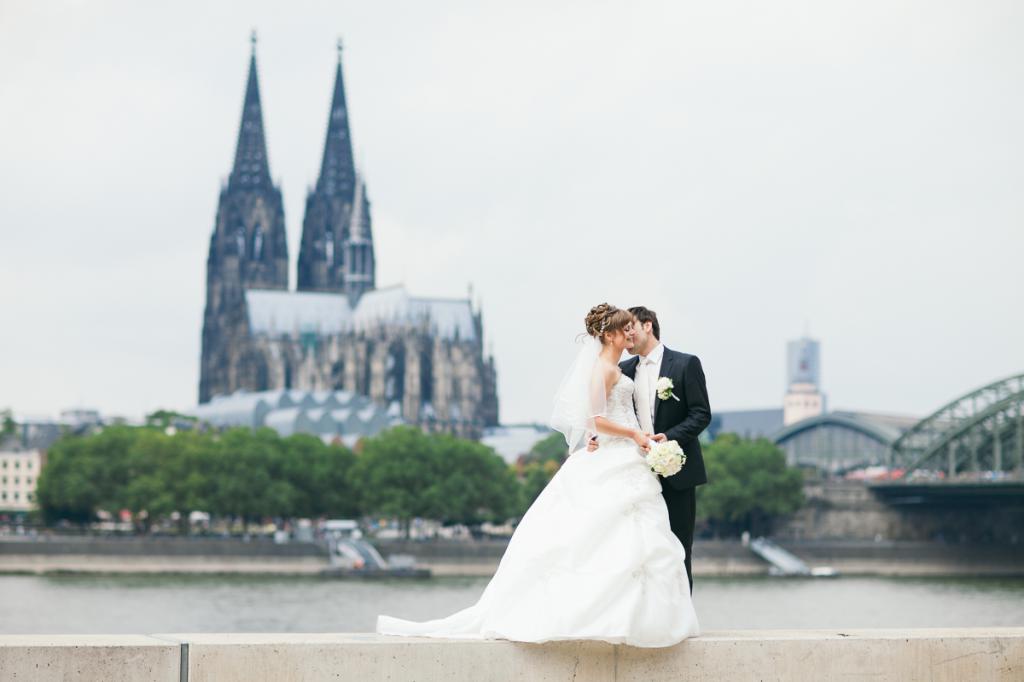 The ceremony begins with the bride and groom entering the church and, huddled together, slowly go to the altar. Previously, the passage along which the young will go should be strewn with rose petals. It is traditionally believed that in this way it is possible to attract the fertility goddess, who will give her future husband and wife children.

A wreath of precious stones and beads is put on the bride, which she should wear until midnight. The Germans do not forget about the tradition of Queen Victoria, invented in the 19th century. She planted a small twig of myrtle, which she pulled out of her older sister's wedding bouquet. The plant took root and grew well, so the queen inserted a twig into the bouquet of her youngest daughter, and her granddaughters, and even great-granddaughter. Therefore, if the bride marries for the first time, she takes a bouquet of myrtle with her under the crown.

During the wedding ceremony, the newlyweds hold candles decorated with beautiful flowers and ribbons. And if it is customary for us to decorate cars with balls and various accessories, then in Germany every driver is given a white ribbon that is attached to the antenna of the car. But the tradition of honking after marriage on the way to the banquet took root among the Germans. Traditions and weddings in Germany are closely intertwined, and young people try to follow the most important rules.

What happens after marriage is registered?

After the marriage is registered, according to the old German tradition, the newly made husband and wife are supposed to cut a real log with a real saw. Such work is not the easiest, and not everyone can cope with it, but the newlyweds must show the guests what they are capable of. And this is not only physical strength, it is also the ability to achieve goals. This tradition is quite old, but so loved by the Germans that they follow the tradition to this day. Only now, sawing a log also means equal rights, because you can achieve this goal only if you properly balance your strength, be able to not only hear, but also listen to each other, do everything together.

As for the famous abduction of the bride, we can say that such a tradition exists in some regions of Germany even to this day. But she has strange rules: the bridegroom “steals” the bridegroom in one of the local bars, where the second one must find her lover. The groom can walk around the establishments for a long time and have a lot of fun, because in every bar where the bride was not there, the newly made husband must drink an alcoholic drink, also treating his friends. And when the bride and her captor are found, the groom must pay their bill.

But instead of the usual throwing of a bouquet for unmarried girlfriends in Germany, there is a tradition called the “Dance with a Veil”. During one of the final dances, unmarried guests at the wedding should tear off a piece of the veil. This will mark a quick marriage.

Dance with a veil in some regions is a completely different tradition, which is that those who want to dance with the bride or groom must put money in a veil. 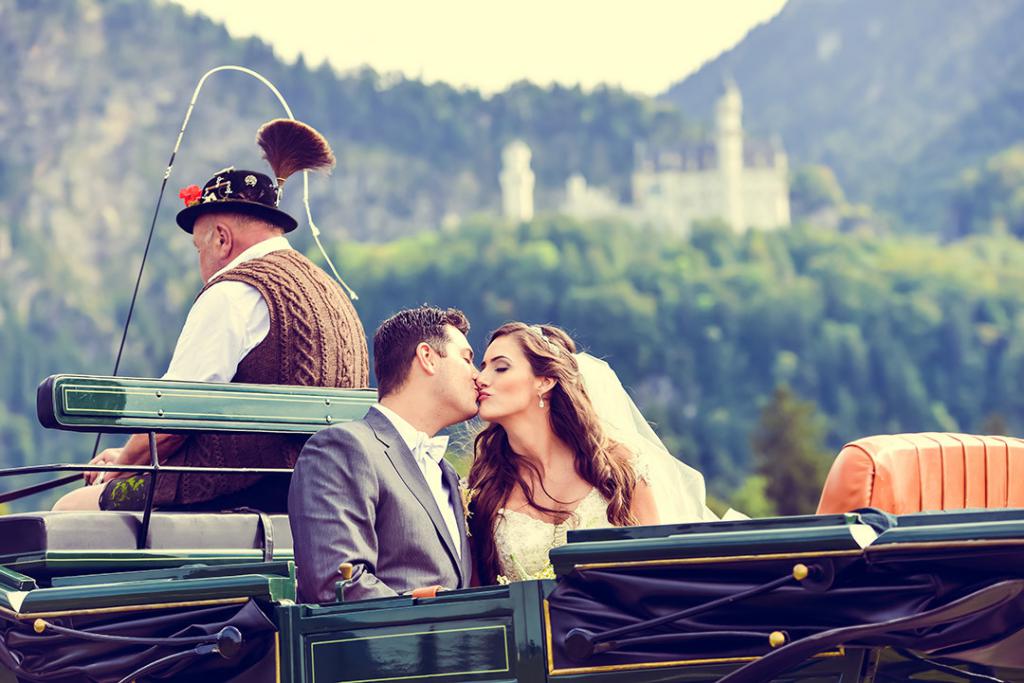 Traditions after the triumph

When the main ceremony is completed, the young spouses again have dinner, either at home or in the house of the bride's parents. We call it the second day of celebration. Guests and newly-made husband and wife have fun, organize contests, eat up and drink what is left of the first day of the holiday. And for the newlyweds a great sign if there are many children at the second day, and as many people as possible are invited to the event.

Some Germans on the second day of the celebration also try to distract their husband and take his bride from under his nose. If friends succeed, then the husband’s job is to find his wife using written hints. And of course, you have to pay a fine for missing your love. The tradition is also accompanied by songs, dances and promises to fulfill all household chores and always help my wife. 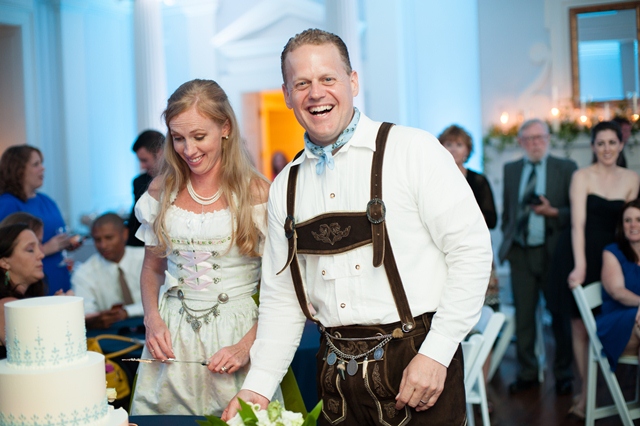 Wedding in any country is an expensive event. According to statistics, the average amount that modern Germans spend on triumph varies from 6,000 to 12,000 euros. And as practice shows, only 5% of spouses refuse a honeymoon. The statisticians even calculated what and how much money the average young couple takes:

Some couples have to take a bank loan to arrange a wedding, but traditionally the parents of the bride and groom share the expenses in half, if the young are not ready to take the cost. The question remains open: what is given for a wedding in Germany? Everything is extremely simple here: the groom and the bride make a list of the necessary things in advance, and if there is none, then money is considered an ideal gift.

German wedding traditions are very ancient, they have evolved over several centuries and are sacredly honored to this day. The Germans are responsible for organizing the holiday, and the wedding usually lasts three days. German traditions are also skillfully combined with Russian weddings in Germany.